I looked back to three years ago on this date to see what I had posted. I enjoy doing this for a Throwback Thursday or a Flashback Friday. It’s one of the wonderful things about having a blog, because often I find something I had forgotten or not thought about for quite a while. I also find that I can often tie in the old memories to what’s going on now. 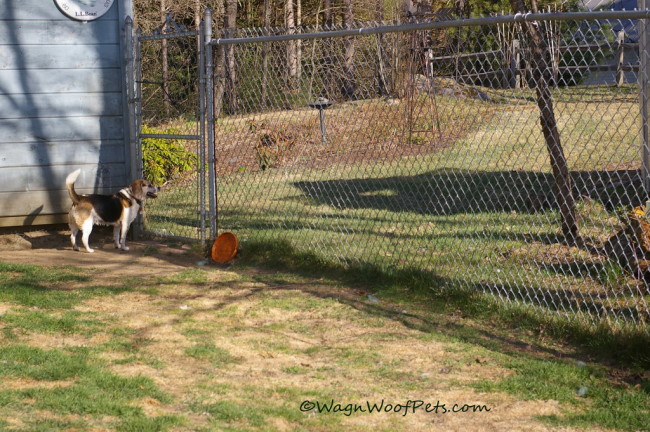 On May 5th, 2013 I posted the black and white version of the above photo. “What was Cricket looking at?” I asked. It turns out that our late beagle Kobi had popped open the screen door downstairs and wandered out of the house to my greenhouse. Kobi had been known to leave the yard in the past, so it was a good thing that Cricket spotted him and gave him away!

When looking for the original version of the photo, it was interesting to see that the dogs were using their pool on that date! It certainly hasn’t been pool weather yet this year! Which I guess is a good thing, since we couldn’t really fit the pool in their small pen right now.

The cool rainy weather we have been having has slowed down our construction. The plan was to put a new door in the end of the house which will lead into the current dog pen. They’ll be building a deck there as well so we have a place to hang out with the dogs outside and get some morning sun (we have a small front porch but the dogs couldn’t be with us there). After that is all done, we’ll be expanding the fenced in yard.

I think I’m more impatient for all that to happen than the dogs are. Taking them out to the pen on leashes is getting old! They are so impatient and Luke is the only one I can get to sit still (sometimes) while I put his leash on. Then they want to charge out the door just about every time. I think we’re getting a break in the rain today, so hopefully progress is made.

Not quite the same! However, forsythias are pretty hardy, and that one will get moved at some point and hopefully thrive again. My hubby was going to cut the whole thing down (he did cut part of it because it was hanging into the driveway), but our contractor promised me he’d move it for me instead, when they start doing some work in that area.

The throwback photo brought me to one more rambling thought: Kobi was a smart dog, and he usually only had to do something once to have it figured out. Once he popped that screen door open there was no stopping him. We basically had to stop using it. He and Cricket also figured out how to open the screen doors on our porch at the old house. The good thing there was that those doors led into the fenced in yard. Luke has once again been taking a page out of Kobi’s book though – he’s been popping open doors here in the new house! 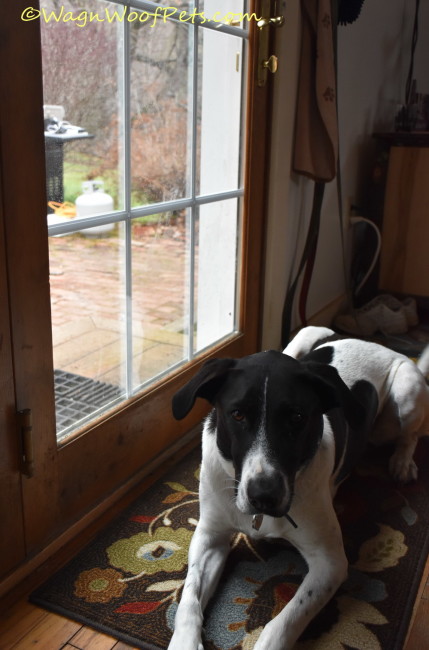 If we don’t latch this door properly, he’ll swat at it and pop it open. That door leads to the open yard, so not good! He quickly learned that swatting at doors will sometimes open them, and he did the same with our bedroom door one time. That time he just got lucky and hit the latch, but I don’t think he knows exactly how he did it so he hasn’t done it again (yet). The problem with that is that is where we put the dogs when the workers are here. So now if we’re not home, we have to put a gate on the other side of that door for added security!

Who ever said life with pets was not challenging? Can any of your dogs open doors?