Multiple Pet Mania and some recent comments on my posts inspired me to write about this…what is the right number of pets? Obviously the answer is different for everyone, so I will just share my experience and point of view. Since three of our four pets are seniors, it’s something I can’t help thinking about a lot.

Other than times (many years ago) when we had kittens in the house, the most pets we have had is 8, four dogs and four cats. It was never anything we planned. We had two cats, and one was getting older so we wanted to be sure the younger one wasn’t left alone. We went to choose a kitten from a litter, and came home with two. Not long after that, the same thing happened with dogs. When our Lab mix Maggie died, Kobi was devastated and couldn’t be left alone. We found another beagle as quickly as we could, but I wanted a big dog too. We had already chosen our golden retriever puppy (we wanted the largest female), but when visiting them one time, we ended up deciding to get two.

It wasn’t too long after that when our older cat died, and we were a 7 pet household for quite a few years. People thought we were crazy but at the time it worked for us. However, it’s not something I would choose to do again. It’s not the vet bills, the expense of food, or the challenges of housecleaning, grooming, and training. For me it’s just the fact that I never felt like I had enough time for each individual pet. They have all still had good lives with us, but I just always wished I could give each one more attention.

Through more losses over the years, we are now only a 4 pet household, 3 dogs and 1 cat. Where do we go from here? I don’t think we could have too many cats…I find cats easy to care for, but again I feel like with so many dogs in the house, poor Samantha doesn’t get as much attention as she should. For that reason, we’ve decided for right now not to get any more cats. Sam is a loner, and likes the dogs fine, so we don’t feel that she is longing for feline companionship. I have to say though that it seems odd only having one cat, and I’m not sure how I will feel about having none. Hopefully I won’t have to know for a long while, but Sam does have her health issues.

The dogs are another story, and it’s much more difficult to figure out what the right number would be. If I wanted another dog right now, my hubby would say yes immediately. I have to keep telling him we don’t need another. When we lost our golden Moses, I was content with three dogs, but with our beagle Kobi aging it did turn out to be the right decision to adopt Luke. But there are difficulties with the odd number of three. I’ll break down my thoughts on different numbers from 1 – 4 (if you have more than four, bless you, I could just never do it).

I miss the days of taking dogs everywhere with me, and that’s why I sometimes consider going back to only two (not that I want to think about that day coming). I’d like to get back into hiking and maybe even camping (most campgrounds won’t allow more than two dogs, which was one of the reasons we stopped camping). We stick close to home now because I don’t want to travel away from the pets. My hubby is happy staying home with our whole crew, so he’d be happy to get more.

I think a lot of the reasons for having whatever number of dogs or cats you have all depends on at what you are looking to do with them, what point you are at in your life, or the needs of your current pets. There is no doubt about it, we love having multiple pets, and I doubt that only having one will ever be a choice we would make. One thing is for sure…I may think I have the answer figured out, and next thing you know I’m visiting a litter of puppies or kittens, and two might come home instead of one!

Have you found the right number of pets that works for you? 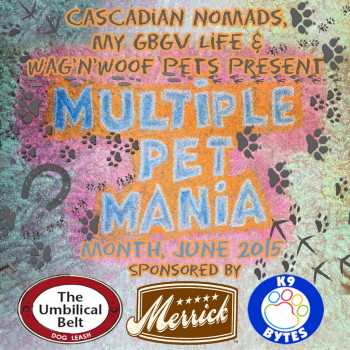 All of this month is Multiple Pet Mania! Be sure to enter this week’s giveaway of treats from Merrick Pet Care (click here to enter). For all the details on the happenings for the month – blog hop, reviews, giveaways, and photo contest ($150 in prizes available!), click here. Also, please be sure to fill out our Life with Multiple Pets Survey.