I’ve kind of only been giving you bits and pieces here and there about all that has been going on around the farm with hatching eggs. First of all, I’ll tell you that in last week’s incubator hatch, we only got one more chick, for a total of four. 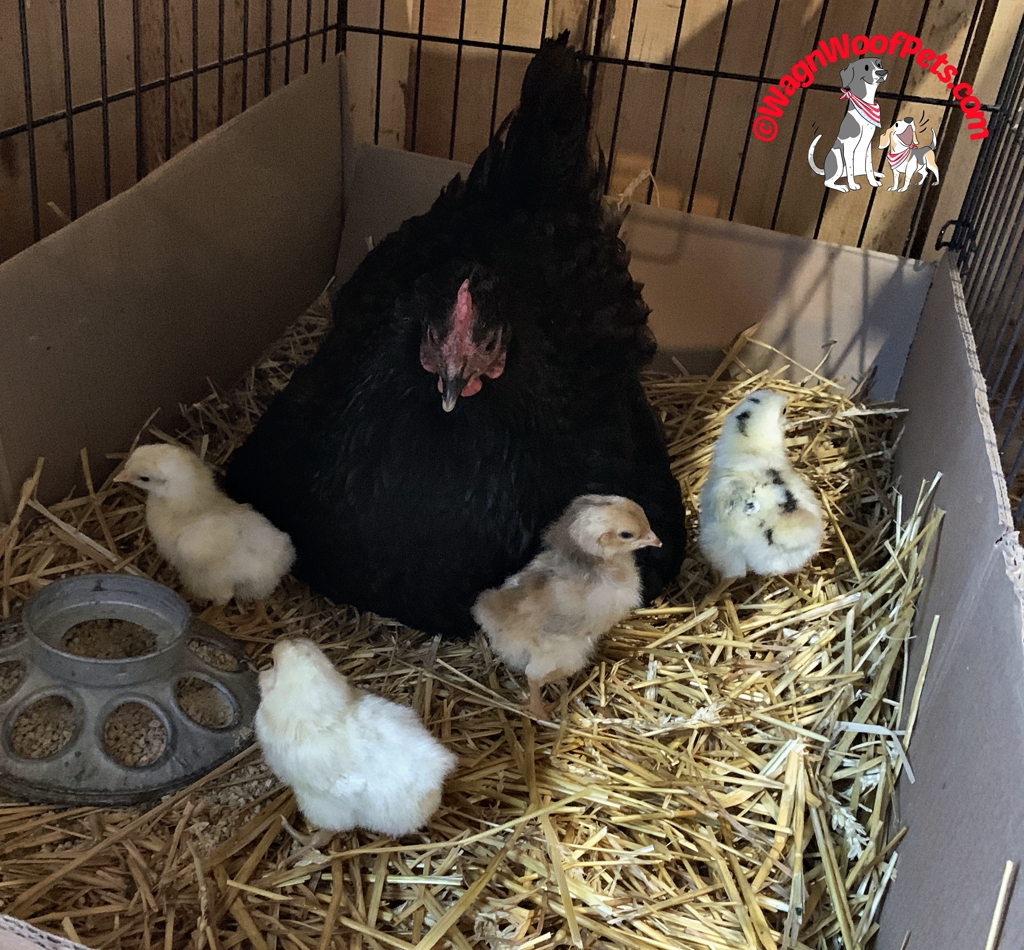 That was thanks to the Dadz, who rescued her from her shell! They always tell you that you shouldn’t mess around with the hatching, to simply let nature takes its course. This egg had pipped (broken through the shell), but then nothing further was happening after many hours. We had given her up for dead and decided to get the egg out of the incubator. When my hubby removed it, he heard chirping!! I was kind of freaking out, not knowing what to do, but he was insistent on helping her and in the end he worked to break her free of the shell and I helped with getting off the sac inside which was stuck to her. I still had my doubts that she would make it, but by the next day we were tucking her in with Mama and her three siblings! (she is the dark one in the photos) 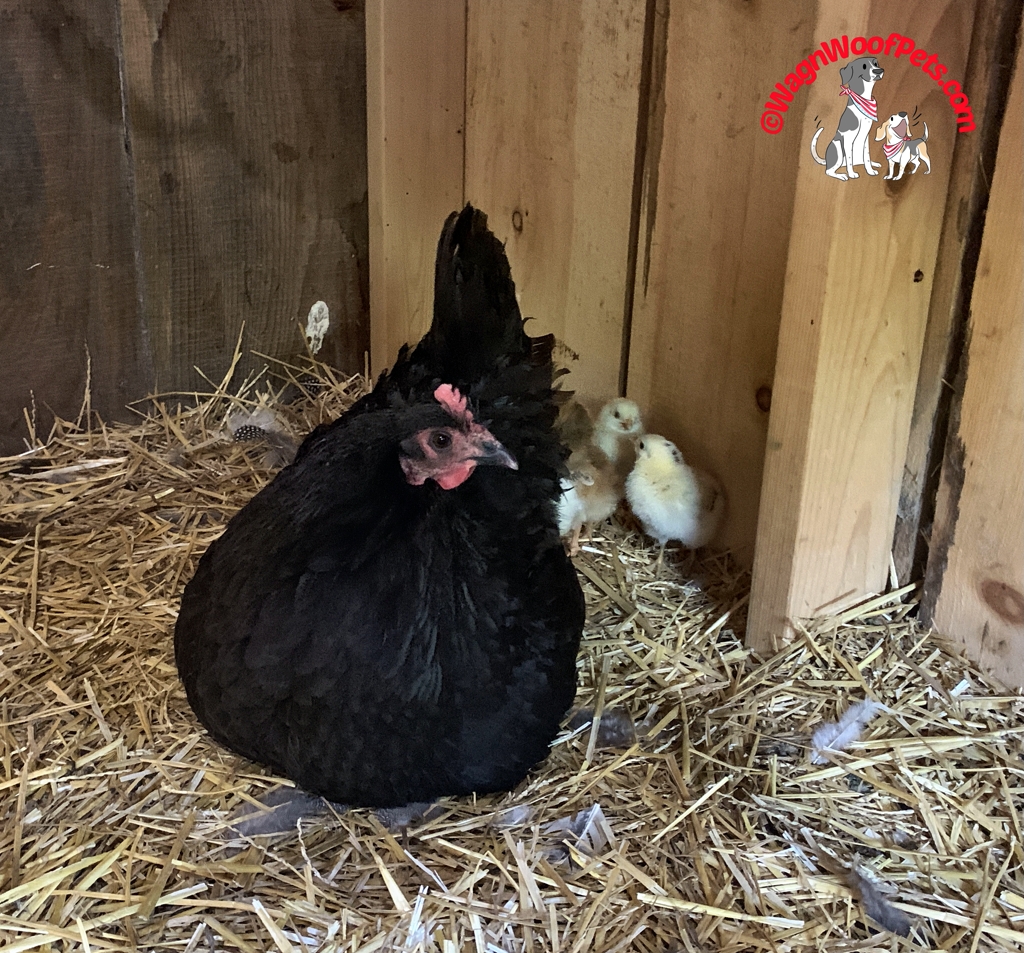 That was the other part of the story….observant readers might have noticed that the Mama that is raising the chicks is not the same Mama I originally had told you had tried to hatch eggs and failed (you can read that story by clicking here). In the end, we decided that in the best interests of her health, we weren’t going to let Blanche continue to try and sit in the nest on any eggs. We removed the eggs daily, while still hoping she might stay a little broody, but she finally gave up.

At that time, we noticed our Black Australorp, Bella, was constantly hiding up in the rafters of the barn. We had to take her down at night! She had been broody the previous year, so we knew she was a candidate. We let her stay in the rafters (why she would think that was a good place to lay and hatch eggs, I have no idea!) during the day and even overnight if we were going to be home to watch for her coming down the next morning. If we had to work the next morning, we’d put her in the coop at night. With about 2-3 days to go before hatching, we put her in the dog crate inside the coop with some dummy eggs at night in the hopes she’d continue sitting.

When the chicks hatched and had a little time to decompress, the Dadz brought them out to her, and she instantly took to being a Mama! She seems quite happy and it is so fun to watch her interacting with the chicks and listening to all the noises she makes with them. She is VERY protective of them too, so we hope to soon leave the crate open so they can all come and go somewhat (chicks will not be allowed outside of the coop and run though). I’m a little nervous about that but most things we read said it was fine. We don’t want Bella to have to be stuck inside a crate all day when we’re at work, so that’s the next plan.

By the way, it has been difficult to get good photos of the chicks because Mama protects them from me, and they are a bit shy as well. In the end, I did get some better ones once we had them out in the coop moving around (after nesting time so the other birds were all outdoors). 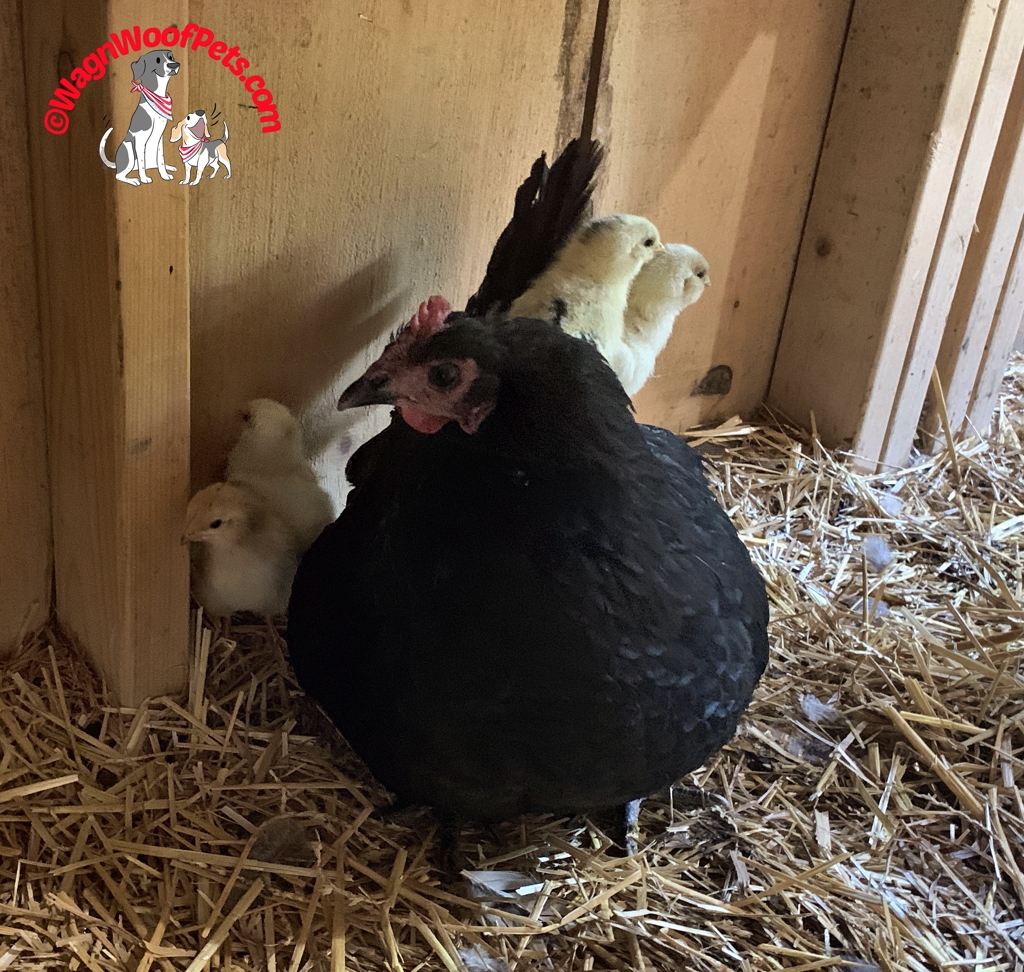 We have been researching and wracking our brains trying to figure out why we had such a low hatch rate (40% on the chickens, 0 on the guinea fowl), and all we can do is make our best guesses. We believe that the age of our male guinea hen (3) may be a factor in the fertility of those eggs. So now we plan to just buy more guinea keets next spring.  I’d been kind of wanting some different colored ones anyway. Guineas mate for life, so the younger Mama (she is 2) is not going to leave Pumpkin Pied for a younger, more fertile guy, even if we’d like her to!

We finally found their next nest, but we will use any further eggs this year for eating or selling. The chicken eggs we’re not as sure about but it may have been because of fluctuations in the incubator temperature and humidity. We need to make 100% sure that’s working properly (there is a chance the eggs weren’t being automatically turned like they were supposed to be) and then we are going to try again. We will monitor things more carefully this time around and must accept the fact that we probably won’t get another Mama to raise them. It will be a little more work, but we will at least be able to have them in a cage out in the coop, instead of in the house as we’ve done in the past.

That’s the fun around the farm! Honestly, it’s been tough for me not being home as much and not being able to watch things as closely. The Dadz is getting training though and doing well at handling all the things I used to do (mostly!). The only thing I still don’t have him trained as well on is finding the guinea nest! I’ve done that both times when I’ve been home on my day off. I also had to send him hunting for a hidden chicken nest in the barn the other night; and he found one with over a dozen eggs in it! So now he’s learned that too, when I got home one day and we had only collected 6 eggs, I knew something was up. He just needs to become more aware of keeping an eye on what all those crazy birds are up to! 😊