We are so excited to be able to participate in the Park Day Blog Hop, hosted by Gizmo and Finn.  We had a great time on our day out! 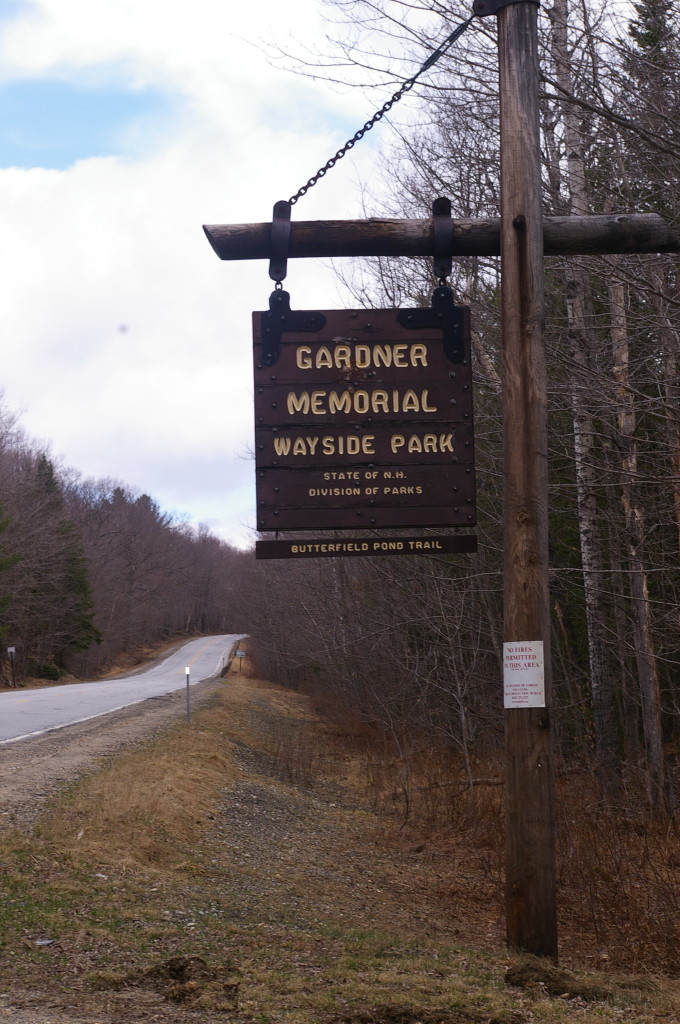 We picked a park not too far from home, probably about 15-20 miles.  The Gardner Memorial Wayside Park is a small park pretty much on the town line between the small towns of Wilmot (pop. 1358 in 2010) and Springfield (pop. 1311 in 2010), New Hampshire.  It is right on Route 4A which runs between the towns of Enfield and Andover, NH, inside the 6,675 acre Gile State Forest. 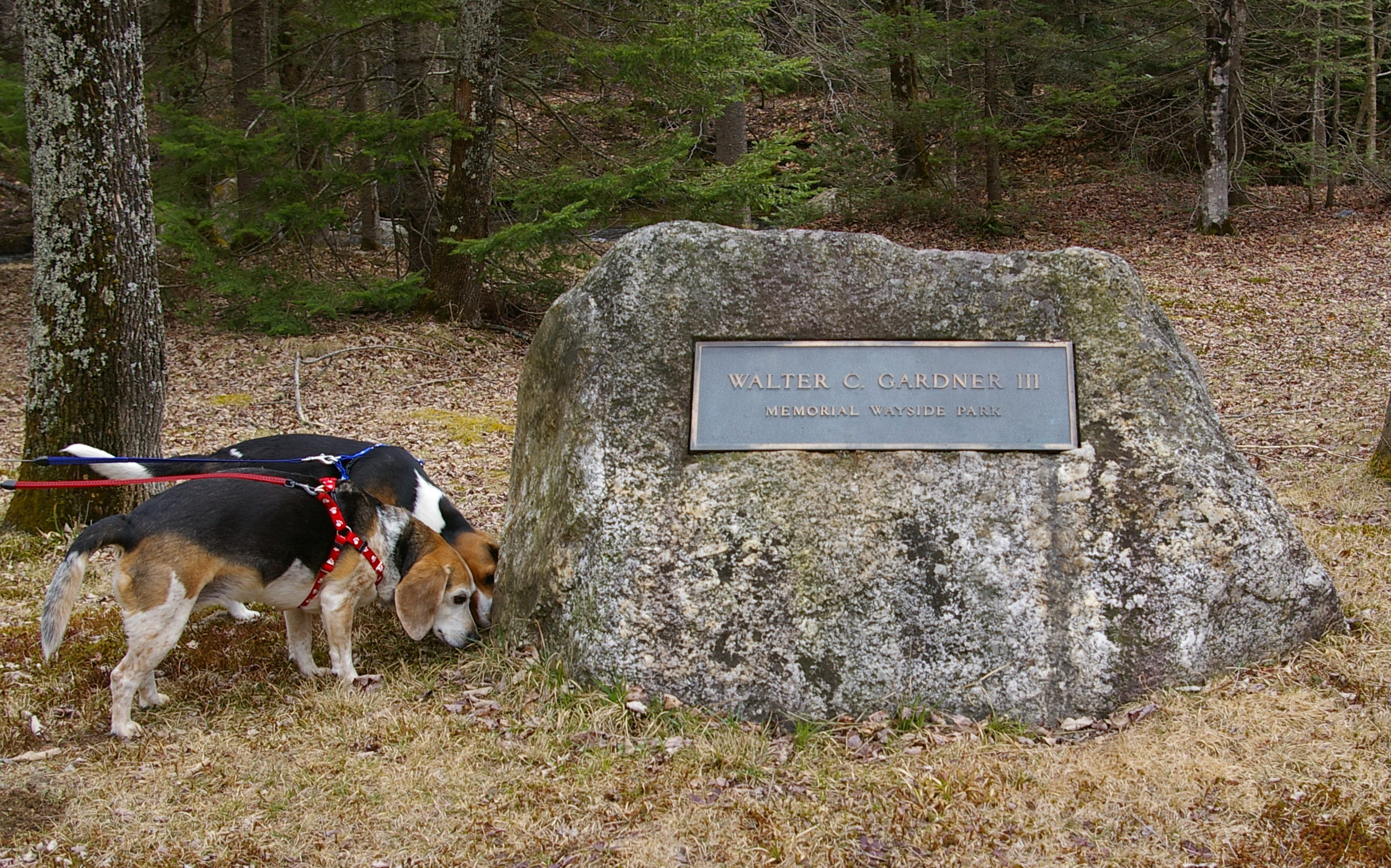 Trixie and Susie, above, are inspecting this memorial that sits at the beginning of the hiking trails.  After returning from our hike, I was curious about the history of this area and who Walter C. Gardner III was.  My initial research could only turn up the fact that he was the son of Walter Gardner, who had established the Gile State Forest.  My initial attempt at finding out more about this family was turning up nothing.  When I was just about to give up, I finally found a newsletter from the Springfield (NH) Historical Society, from 2010, that told the tragic story of this family.  I was almost sorry I didn’t give up, because it was just so sad!

In 1933 Walter Gardner was a lumber dealer in Springfield, NH, and was married to Bessie with whom he had three children, a girl 10 years old, a boy 6 years old, and 10 month old Walter Jr.  His wife was not well and one night murdered their three children and then killed herself, while Walter was upstairs sleeping.  It is thought now that perhaps she suffered from postpartum depression.

Walter did go on to re-marry years later and it was with his second wife that he had another son, Walter III.  Tragedy struck again.  When Walter III was attending college, he accidentally shot himself while playing Russian roulette.

Walter owned many forests in Springfield, and it was later arranged for Dartmouth College to purchase some of the land.  That is when it was named Gile Forest, in honor of John F. Gile, a trustee of the college.  He was also a surgeon at the local hospital, and had delivered Walter Gardner III in 1935.  So that is the story of how the park came to be established and the memorial put there for this family who suffered so much tragedy.

This is not a big fancy park, but more of a woodsy area with some short hiking trails, a beautiful large brook, and a picnic area.  It’s really a perfect place for a morning or afternoon leg stretching walk, enjoying the scenery, and then having a nice relaxing picnic.  If you like to fish, I am sure fish could be found in the brook or in the pond we walked to.  The park is open year round but is not maintained so I’m not sure if you could get in there in the Winter or not.  You could probably park on the side of the road and walk in on snowshoes and pick up the trails.

On this early Spring day, the forest still looked a little bit like Autumn….the trails were still covered with crunchy leaves, and there is not much sign of greenery yet.  We were hoping for a warmer day, but the temperature never quite reached 50 degrees, and it was breezy.  It was plenty warm walking though.  Accompanying me, my beagle Kobi, and my Golden Sheba, was my two sisters, Lynn and Karen, and Karen’s two beagles Trixie and Susie. 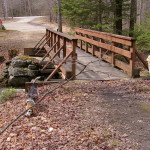 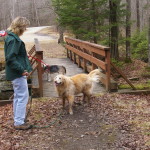 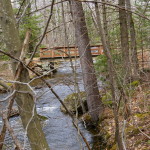 This pretty bridge leads you from the parking lot to the hiking trails. 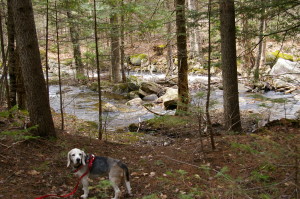 We decided to head to the “old mill site” first. The former mill dates back to the 1800’s.  It is only .1 miles from the sign, and the path meanders along the beautiful brook.  The brook looks to have many swimming holes.  Sheba really wanted to go in, but it was just a bit too chilly this day. 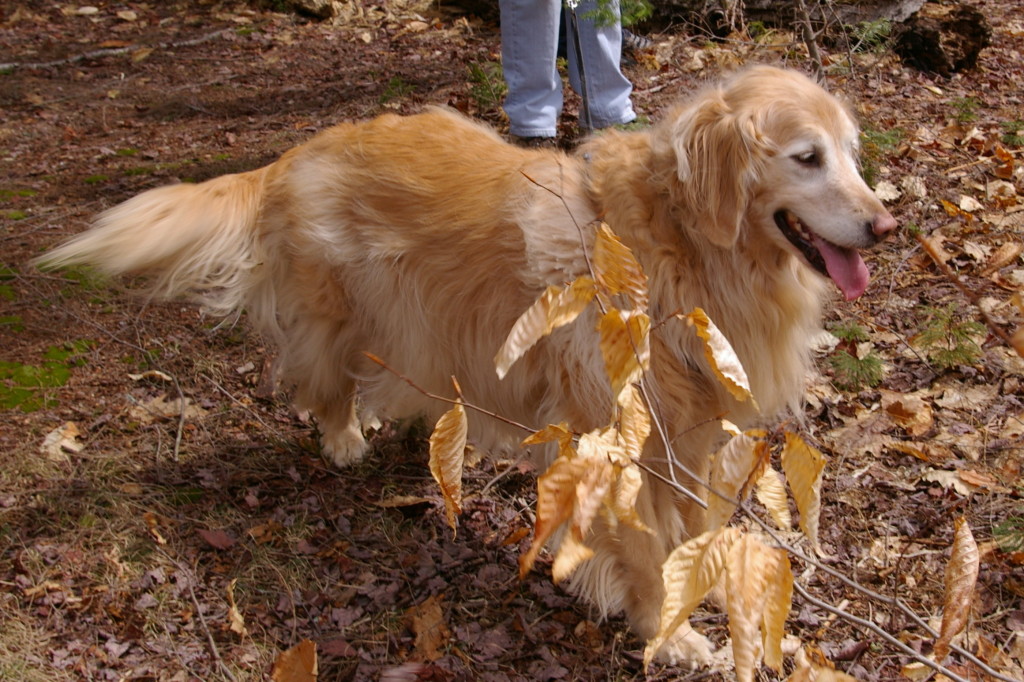 After visiting the mill site, we headed back and took the trail leading to Butterfield Pond. 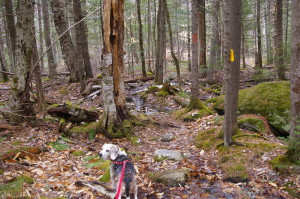 The trail was very wet and muddy in places.  Not that the dogs cared!  Kobi, the senior member of the dog party, was often leading the way! 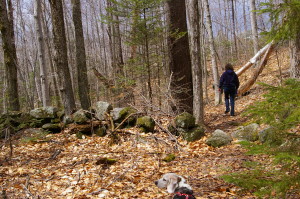 The forest in this area is filled with many different trees:  sugar maple, yellow birch, beech, and balsam fir.  We passed through this old stone wall here, evidence of homesteads past.

Wildlife is prevalent in this area:  moose, deer, fox, bears, and many varieties of songbirds.  The only wildlife we heard, however, were croaking wood frogs when we got closer to the pond! 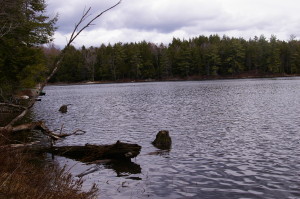 Butterfield Pond is a 12 acre trout pond.  There were a few old rowboats and canoes left along the shoreline as evidence that fishermen often visit here.

The hike back to the picnic area was uneventful!  We were hoping for more sunshine and warmth this day, but we toughed it out and still had our picnic. 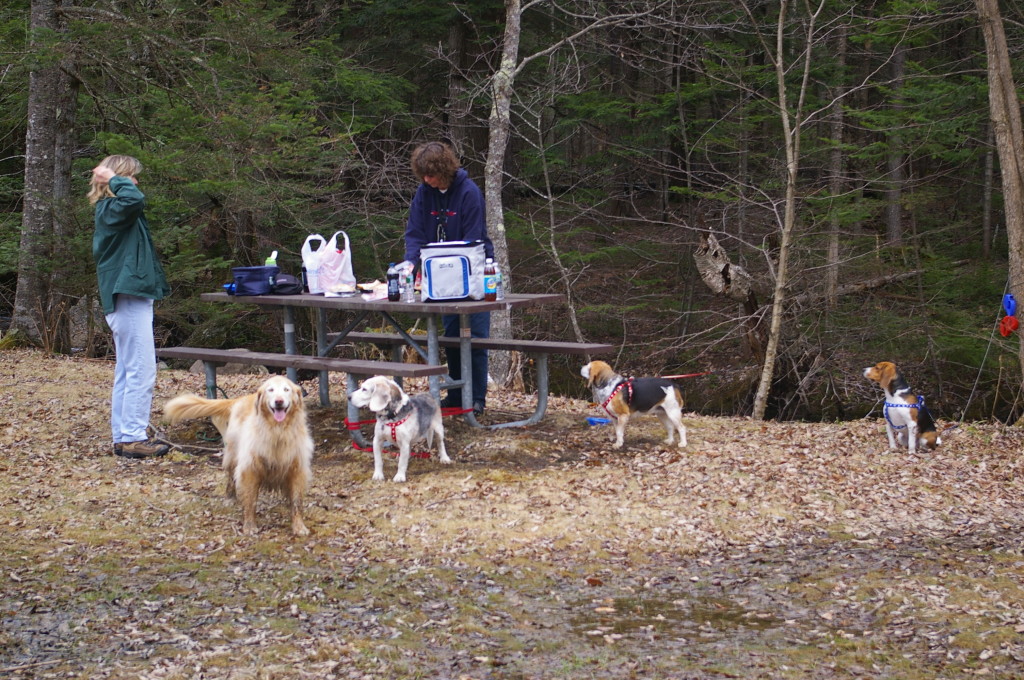 We didn’t linger too long over the picnic, since all we got was a glimpse of sunshine.  In spite of the less than ideal weather, it was a very enjoyable visit to this park!

We are also participating in the FitDog Friday blog hop, hosted by SlimDoggy, Peggy’s Pet Place, and To Dog With Love.   FitDog Friday is all about keeping fit and being healthy, and our hike in the park was all about that for our dogs as well as ourselves!