Things didn’t go exactly as planned, but we got Luke out for his first swim this week, and he did quite well.  Best of all, he had a lot of fun.  Earlier in the week, my hubby and I took all three dogs for a walk down the rail trail to the river, which is about a 1 mile walk from our house.  He had no trouble following his sisters right into the water, and we threw some sticks into the deeper part for them to chase.  We had a long leash on him, and watched closely to be sure he wouldn’t get scared or have trouble.  He was a bit hesitant when he first felt it getting deeper, but it didn’t really phase him too much. 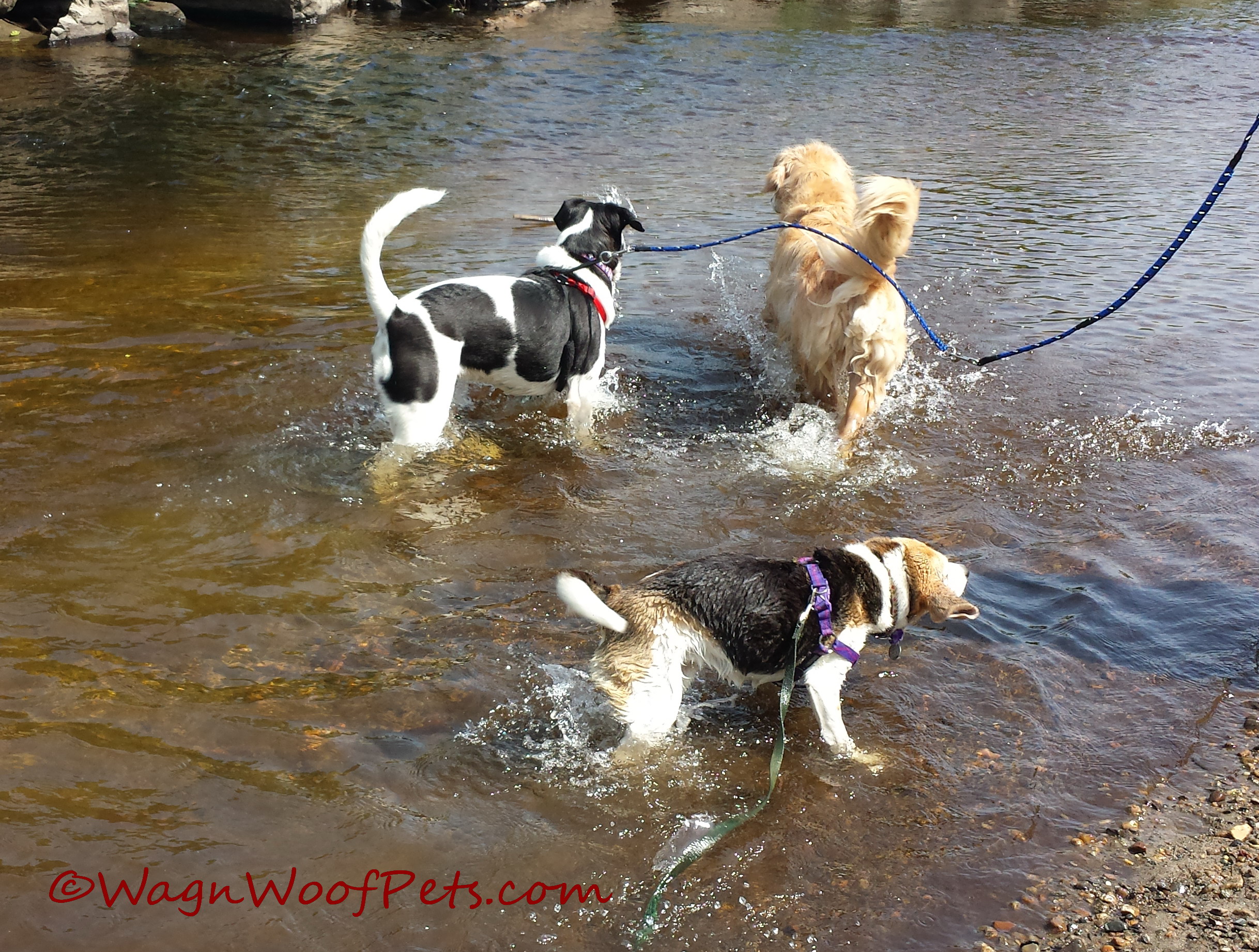 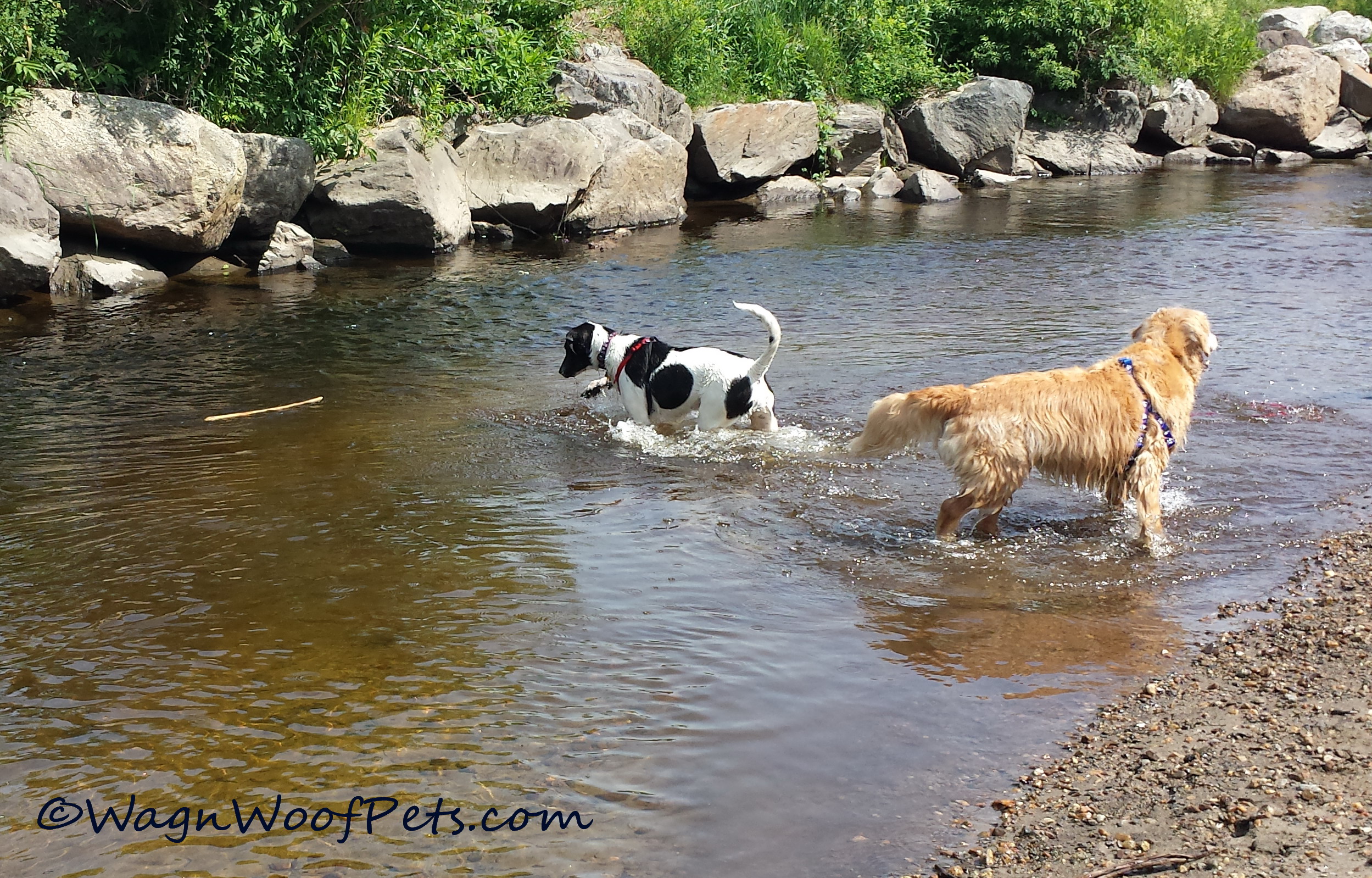 We weren’t at all surprised when he got into the deeper water and attempted to swim!  He needs to refine his technique a bit, his front paws were coming up out of the water and splashing, but he had the right idea.  We are sure with more practice that he’ll be an expert in no time!  Unfortunately, I don’t have any photos of him actually swimming, because I was just enjoying watching him, and thought I could get more photos when we took him again.  That’s where things didn’t go as planned.

We planned an outing for Thursday to Gardner Memorial Wayside Park, a place I visited last spring with my sisters and some of our dogs.  It’s a nice spot with a picnic area, a short walk to an old mill site, and a 1/2 mile walk through the woods to Butterfield Pond.  The plan was to hike to the old mill site, the pond, and then come back for a swim in the river and a picnic.  It went mostly as planned, but was a bit hectic.  We tried to come up with the best plan possible for leashes, and we had Luke and Cricket on a coupler, and Sheba on her own.  They kept getting tangled around each other though, and Luke would chew on anything that came close to his mouth in the process.  The girls have never been well trained at walking, they walk great on their own, but when they’re together they both want to be in the lead.

The pond looked nice but unfortunately was very mucky at the edge, so we let them cool off in there but didn’t spend much time.  On the way back, Luke ended up chewing through the extension on his harness and got loose!  Thank goodness his recall is halfway decent now, and we were able to still figure out a way to use the harness (he had a collar on as well so we could have used that too, but I always worry about them slipping out of those).

We went back to the picnic area, and they really needed the clean river to wash off the mud from the pond and other muddy areas on the trail.  We put the longer leashes on Luke and Cricket, and let Sheba off leash for swimming.  Unfortunately, Sheba wasn’t sticking with us and kept distracting Luke by wandering off so it was kind of a zoo.  Cricket loves the water and will go in to cool off, but will only swim if we throw a ball.  With the three of them it was just a bit out of control, so Luke got a bit of actual swimming but not a lot.  He did have a blast just splashing around in the water though!

But next thing I knew, his harness had started coming off and was wrapped around his leg so we had to fix that (while doing that, Sheba decided to come up behind me and somehow splashed me, soaking my glasses so I could hardly see!).  Finally, my hubby came to help (he was wandering the river bank trying to take photos and letting Cricket sniff around).  The harness didn’t take well to getting wet I think, and he had also chewed another part of it at some point!

That put an end to our adventure, and I never did get any good photos of Luke swimming with all the commotion; we decided that it will probably be best to take him alone while he learns!  We need to get a better harness too, this is actually the second harness of this type that he chewed through.  I have another one to try, of the same type we use for the girls.

At least it’s only the beginning of summer, so we’ll have plenty of time to take him out more, and at some point I’ll get some photos of him swimming!  We all got some good exercise yesterday, even though things didn’t go very smoothly.  These were our first outings with all three dogs and we’ll get it all figured out soon (I hope).

We are happy to be joining our blog hop hosts SlimDoggy, Peggy’s Pet Place, and To Dog With Love.  Please visit their sites and others through the links at the end of this post to learn more about keeping your dogs fit and happy!

Also, please be sure to visit #5 on the list – it is my guest post on SlimKitty, the 2nd part of my story of how we got our cat Samantha fit!