We had a mild spring thunderstorm roll through recently. None of the K9 crew likes storms, but this time they all seemed to react a little differently.

I don’t know if Cricket’s hearing is starting to go a little in her old age, or if she was just so tired from playing that day; but she never even moved. She seems to sleep a bit more soundly these days, just as her late beagle brother Kobi used to do when he got older. 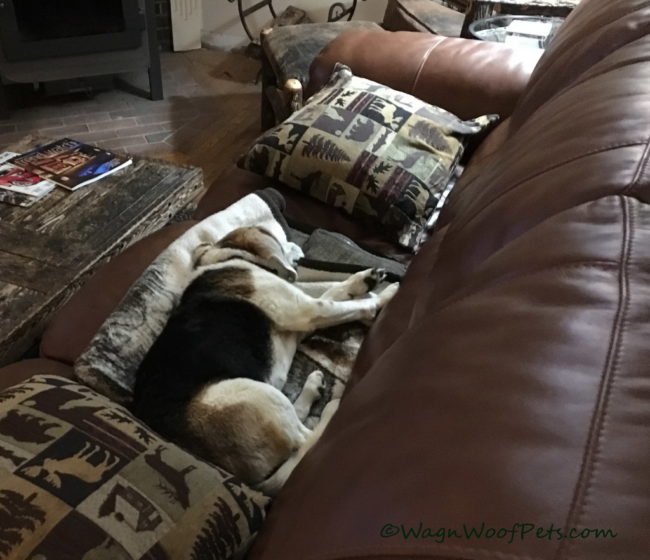 At the first clap of thunder, Luke just picked himself up and went and hid in the master bedroom closet. At our old house, his safe place was downstairs on his favorite bench in the mudroom. That’s where his crate had been as a puppy, and where we kept him before he was old enough to have run of the whole house; I assumed that was why he felt safe there.

When we moved, I worried that he wouldn’t have that safe place. It occurred to me that the master bedroom closet would be perfect, and I was so happy the first time he went in there on his own when he was nervous. I wanted him to have a place where he was comfortable during storms or when other loud noises might bother him. As you can see, he still looks a bit nervous but he wasn’t shaking or anything. 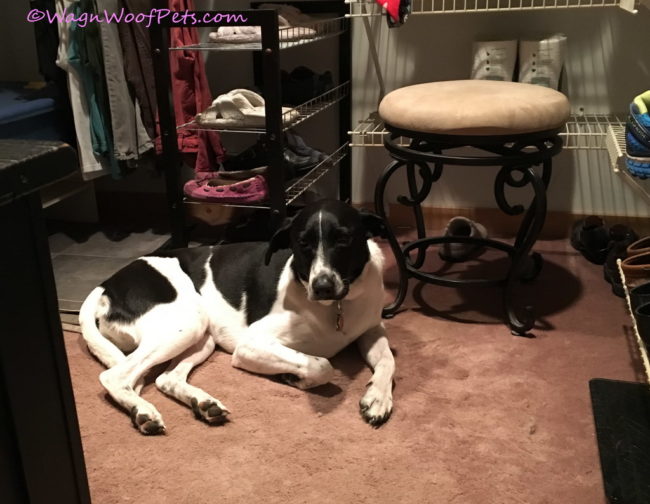 With the other two in their places, Sheba was the only one left and she had started pacing around nervously. I cursed myself for not thinking of putting their Calming Collars on them when I knew there was a storm coming (though we can’t see the storms coming like we used to at our old house). We’d had some good results from the collars the last time we had a storm, but they do tell you that putting them on ahead of time can help a lot more. 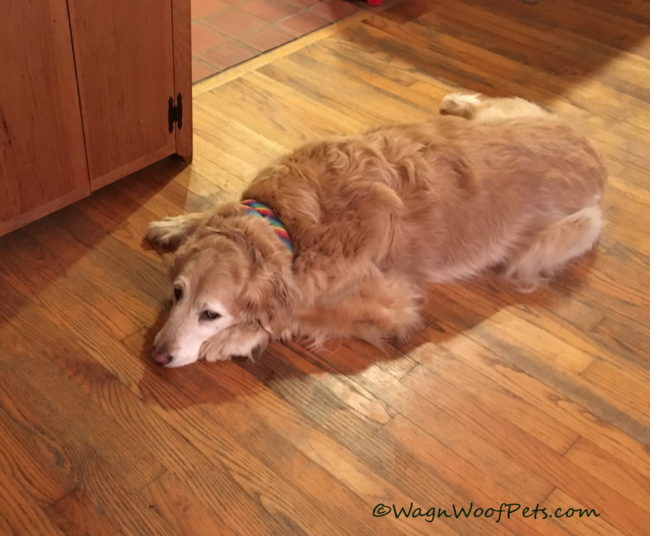 However, you can see that didn’t matter. As soon as I put that collar on Sheba, she laid right down! I breathed a sigh of relief; I hate to see any of the crew nervous and uncomfortable. I didn’t put Luke’s collar on him since he seemed mostly OK, but next time I will just for a little extra comfort. You can read our full review of the Calming Collars by clicking here.

That storm was again fairly mild as some storms go, but I have high hopes that even if we get a worse one, we’ve found things that will help each of them feel a little better. I also think our new house carries the sounds differently, and storms might not seem quite so intense here. Our old house was on an open hill (which explains why we could see storms coming), but this house even though also on a hill is protected more by trees. The new house has definitely had some benefits for the dogs that we didn’t anticipate!

*I was not compensated for the mention of the Calming Collars in this post; I just wanted to share that they did help once again.