Thank you to our blog hop hosts 2 Brown Dawgs and Ruckus the Eskie.  This hop is “a little of this, a little of that, and everything in between”!

I blamed my hubby the other night for not reminding me that one more pet meant one more to worry about when they’re not feeling well.  Luke has been here just over 2 weeks now and we’ve already been to the vet 3 times.  The first, on the day after he got home, was routine and everything looked good.  The next day he started with this awful coughing/hacking sound, and threw up a little.  We had been warned by the rescue that kennel cough was common in transported puppies, and even though he’d had a vaccine, he still might get it.  Knowing this did not keep me from worrying!  Add to that the panic that all the other dogs might get it too.  This was Christmas Eve day.  I called our vet immediately and he was able to see him that afternoon.  Kennel cough was confirmed, antibiotics given, and we were reassured the older dogs were more immune and may not get it, and if they did that they would probably just get over it in 2-3 days.  Luke was much better by the next day and the other dogs never got it.

Round two:  At the end of his second week home he started getting diarrhea.  It was off and on and everything else seemed fine so we didn’t worry too much until he had it all day Sunday.  He was eating fine and acting fine, and Monday morning it had let up some.  Then Monday night he threw up, and Tuesday morning didn’t eat all of his breakfast.  Worry sets in again.  In this case we’ve also been warned by the rescue that worms are common with these puppies, even though he’s been wormed!  I still worry.  Luckily, he was already scheduled for his next vet appointment for shots Tuesday afternoon, so that was good.  Yup, it turns out to be worms.  He was given wormer and he already seems to be improving.  His shots are rescheduled for when he feels better. 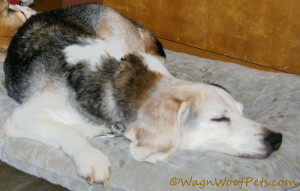 This is by far not exclusive to puppies.  After all, we have 3 dogs and 2 cats getting on in years, and they’ve given me plenty to worry about too.  I worry about Conrad every day because he just seems so fragile.  Kobi’s back legs seem to be getting weaker and he sleeps longer and harder all the time.  Just this morning, he scared the heck out of us.  My hubby sometimes has to wake him up in the morning now, and this morning he was not waking up.  I jumped out of bed to check him too….we were convinced this was it….but I was able to wake him.  Thank God.  My wish for Kobi is that when it is his time that he will just go peacefully in his sleep.  But we are in no way ready for that to happen yet.

I’m a worrier, and even if logically I know I shouldn’t worry so much, I still do.  I think I got that trait from my Mom.  I’m sure it’s also a Mom thing….human or fur.  I’ll survive.

I didn’t mind going back to work after two weeks vacation on Monday.  I like my job, even though there are frustrations as in any job, and I’ve started my new shorter schedule so that’s great (I now work M, W, F, 7-1 instead of 7-3).  Leaving Luke for over 6 hours for the first time was the tough part.

He has actually done well except for one factor:  saving up 6 hours of puppy energy.  Yesterday he had me pulling my hair out.  He was just into everything after I got home!  He had two accidents in the house, even though we went outside numerous times.  He has been really good with the housetraining, when we’re home.  We take him out often and he pees immediately when he gets out there.  But he seems to forget it all when he gets playing. 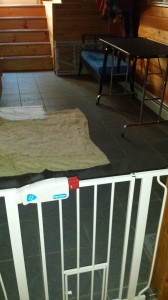 This is his room when we are at work….the crate goes on that blanket in the center, but it is open so he can wander the room.  The other dogs can see him through the gate (I hope they go down and visit him but I can’t really know).   We fill a kong toy with kibble when we leave and he usually doesn’t even notice we’re leaving.  So far he’s been good in there.  I think he probably sleeps most of the time.  He’s very excited to see me when I get home, and he’s raring to go.

Funniest thing…..when my hubby got home two hours later, I told him Luke was all his so I could get some things done.  Yes, you guessed it, he was a perfect angel after that and he layed down and went to sleep until supper time.

It’s so much easier when I’m home because he can play for a while, then I can put him in his crate for a nap and get some things done.  Oh well, I have to work for a living, so I’ll just have to deal with it!  I’m just going to enjoy his puppy antics, because I know they won’t last forever.  Earlier this afternoon I just watched he and Cricket wrestling on the bed for 10 minutes with a smile on my face. 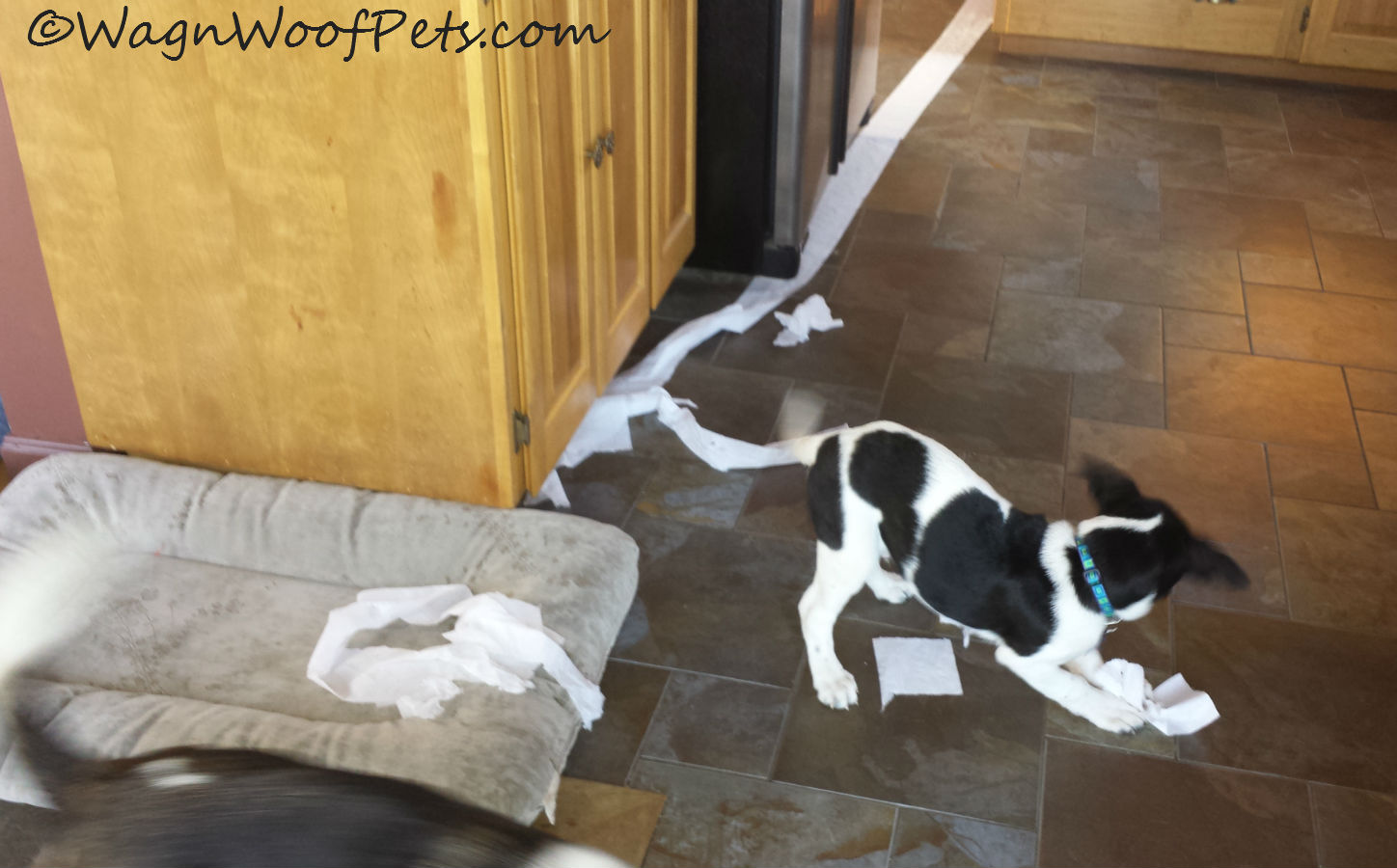 I couldn’t even get in the door when coming in from outside with him when he ran into the bathroom and came out with this.  It’s like he was planning it all along!

Once we get out of this bitter cold weather spell, we’ll be able to spend more time outside playing and burning off that energy too, and that will help!

I just can’t resist sharing some more sweet sleeping photos of Luke and the other pets!