The first day of spring may have been two weeks ago, but here in NH we’ve only seen glimpses of it for a day here and there.  The snow is melting, but very slowly. The frigid winter had me unmotivated to walk, and other than the occasional venture out, the dogs got most of their exercise playing in the yard.  Sheba got a lot of walks when she was recovering from her surgery and couldn’t play, but they were mostly short.

I’ve been waiting for that quintessential spring day to get me motivated to start walking regularly again.  We really haven’t had it, but this last week I was determined to get out there again, thinking I may need it to save my sanity.  As it turns out, the two days I planned to walk started out very cold but by the time we got out there the sun had come out and it really was quite nice. 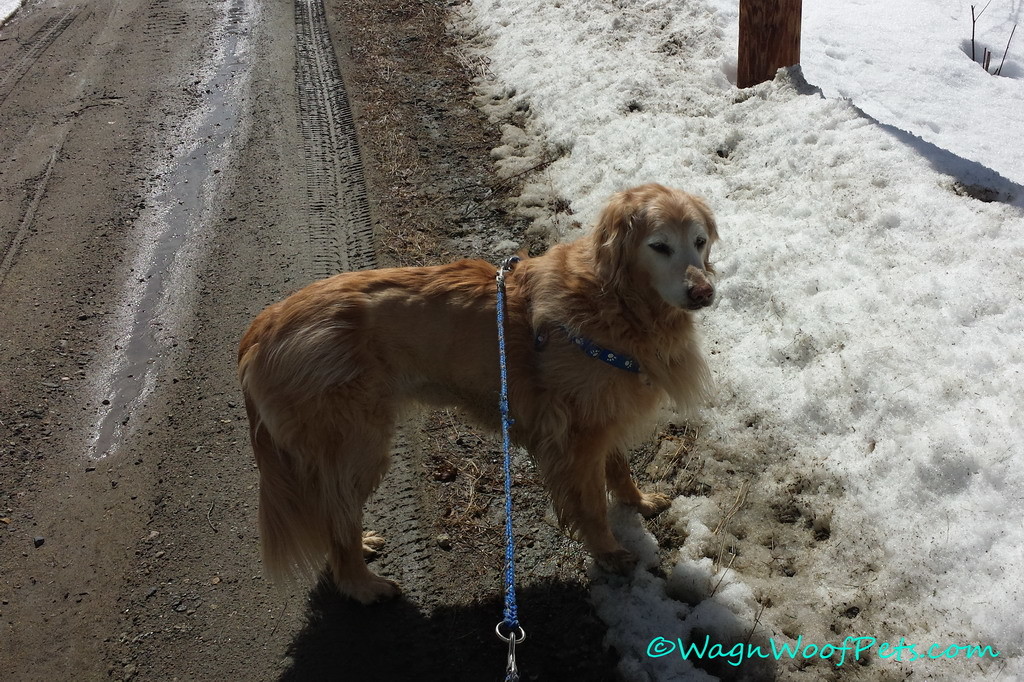 I took Sheba down to the Christmas tree farm.  The road was very muddy, so I either sloshed through the mud or tried to walk on the sides of the road where there was still snow.  Sheba actually did the same, and mostly stuck to the snowbanks!

As you can see from the photos, we still have a lot of snow.  I was able to take Luke down in our woods and it’s packed down enough that I didn’t need my snowshoes.  I could barely see the snowshoe trails I had made just about three weeks ago, but we were able to follow some of those as well as some of the deer trails.  There were places where the snow still looked two feet deep though! 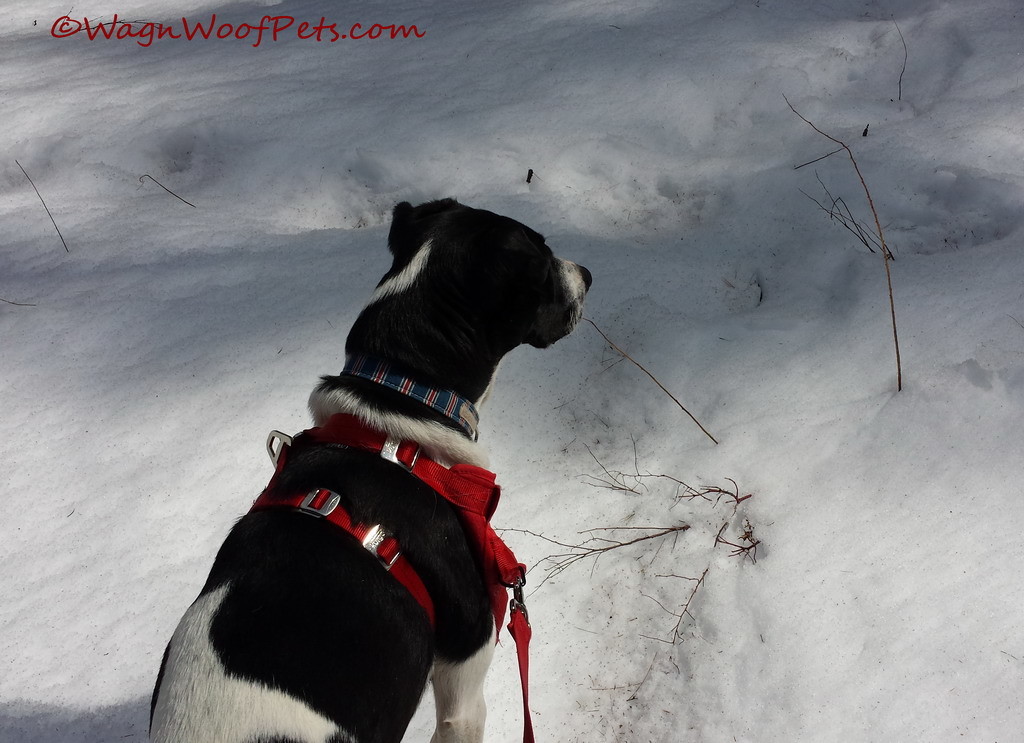 We wandered around the woods and even though we didn’t cover much distance, due to Luke’s hound dog nose, he enjoyed sniffing everything and it was good to be out there moving around.  I swear both he and Sheba have two walking styles…either stopping and sniffing everything, or bulling forward and pulling me.  That’s one of the reasons I don’t walk them together, because I’m afraid they wouldn’t coordinate their varying styles.  Even though Cricket is a beagle, she is full speed ahead at almost all times (and she’ll be getting her first spring walk this weekend).

Luke virtually ignored me, you can see in the photos that he mostly won’t look at me, and I had a squeaker in my pocket to get his attention which didn’t really help all that much.  He suffers from a condition where when his nose engages, his ears shut off.  I believe it’s common with hound dogs and hound mixes (he may be mostly Lab but whatever hound is in him often dominates).  But I was pleasantly surprised when we walked a short ways down the road and the first time I said “heel” he immediately started looking to my hand for a treat, and fell into step beside me!  I was afraid we’d be starting from square one on the “heel” training, but he has not forgotten!  I’m anxious to get working on that again, and now that we’ve “broken the ice”, so to speak, with spring walks I think we’ll be doing a lot more.

Housekeeping note:  Our blog is getting a makeover!  The change over is happening tonight, so the site may be down overnight or early tomorrow morning.  We’ll be back to tell you more of the details about it and why we decided to do it after it’s completed.  Even though I’ve had help with it, it the planning has taken up a lot of my time lately….plus we had a special birthday party for my oldest sister last weekend and I had company as well. Between those things I haven’t had as much time to visit with all of my blog friends.  So if I haven’t been by your blog as much, that is why, and I hope to start getting caught up again on things this weekend!

It is FitDog Friday’s 2nd anniversary!  Be sure to stop by the host blogs for a huge giveaway celebration!  Our hosts are SlimDoggy, To Dog With Love and MyGBGVLife.  Please also visit other blogs through the links below to learn more about keeping your dogs fit and happy!