2016 was a rough year for many in so many different ways. I think the humans all got burnt out by the election process, no matter which side you were on. There were losses of many well known people, some very shocking and all sad.

The pet blogging community had many losses as well. Some of our closest blog friends lost furry family members, some expected because of aging and illness, but others more tragic and unexpected.  The truth is, we thought we would be in the former group. When our golden retriever Sheba had her second surgery to remove cancerous lumps in December of 2015, we felt sure she would not make it through the next year with us, and never dared to imagine that she would even be with us this following Christmas and beyond.

I feared our move to a new home might be too stressful for her. We knew we were blessed that she was a trooper for that, and went on to look forward to the “Summer of Sheba”. That summer and fall was not without its ups and downs and scares for her health. Once those settled down, we started to have hope that she’d make it to her birthday in October, and then to the holidays, but we didn’t really expect that she would.

Then I started to have one more hope, though I wouldn’t write a word of it until this new year. You see, each full year since I started this blog (in August of 2012), we lost one of our “crew” members. We lost our golden retriever Moses (Sheba’s littermate) in June of 2013 to cancer, suddenly and unexpectedly. In February of 2014 we lost our beagle Kobi, and in May of 2015 our cat Conrad, both to old age. I felt cursed, and with Sheba’s cancer progressing, I thought the yearly curse would continue and we would surely lose her in 2016. 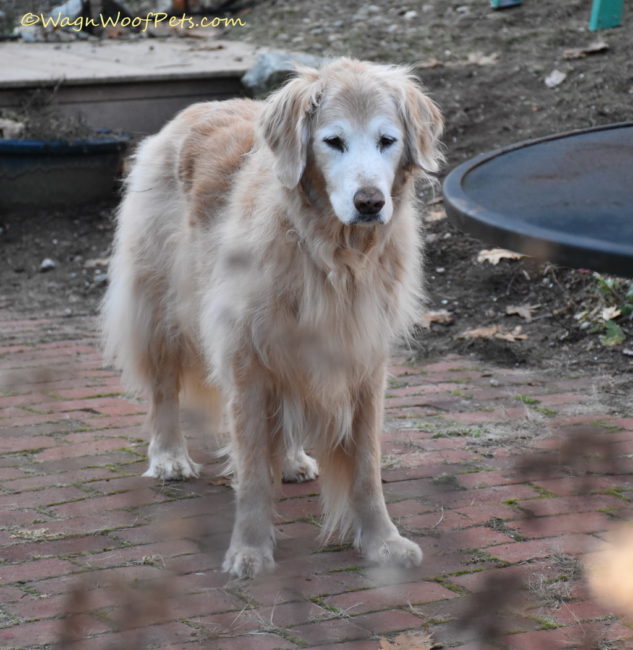 What scared me even more was that if that happened, what would 2017 bring? With two more senior girls in the household, beagle Cricket and cat Samantha, would the curse continue to this year?

Our sweet girl Sheba just broke that curse. I figuratively held my breath up until the last minute of 2016, and when we woke the next morning into the new year, here she still was!

We can’t deny the fact that Sheba is slowing down lately. Her appetite is not what it was, she no longer eats breakfast and only eats a light supper. She will, thankfully, still take treats throughout the day though. She often comes into the house to lie down before the outside ball games are over, something she never did before. This morning she didn’t get up with the other dogs. Cricket was worried, and at first she wouldn’t get up either. Then as the Dadz dished out breakfast, Cricket so sweetly came to check on Sheba again.

Sheba was OK, and she did get up a few minutes after that. She will still play with Luke a little bit too, but she hasn’t even attempted to destroy the new toys we got. She also seems to be losing her eyesight, at least long distance. She can’t see when the ball is being thrown, and in order for her to catch it, we have to get up to within about two feet of her and gently toss it. Yet she’ll still head outside every time we go to play, and enjoys herself regardless.

It’s tough to live with sometimes, seeing her a bit weak or stumbling at times. Mostly it’s the not knowing how it will go – will she decline slowly, leading us to have to make that dreaded decision, or will we wake up one morning or get home from work one day and find her gone? I try not to dwell on it, but it’s difficult to not think about.

As much as that weighs heavily on us, we still celebrate every day that she is with us. Bless her for fighting so hard to stay here for as long as she can, and for extending those days into the new year; putting an end to my silly, though not unfounded, superstitions. I sometimes think she knows exactly what she’s doing.