I simply had to share this story about Luke today, because his nose amazes me sometimes. The photos aren’t the greatest, since I had to use my phone in low light to capture the moment as it had happened, so I apologize for that.

Let me set the scene: on days that I don’t have to work, my routine is to sit on the couch closest to the wood stove, drinking my coffee and watching the news before starting my day. Luke almost always joins me there, so it’s a great snuggle time for us!

This morning I had barely sat down, and Luke joined me immediately. After just a couple of minutes, his nose suddenly went up in the air. “Whatcha smell, Buddy?” I asked. He continued to sniff and then jumped off the couch and went behind it and sat next to the sideboard that is behind us.

It didn’t take me long to remember that last night I had given him a new Kong Squeezz ball* (affiliate link) to play with. After he had played with it for a while, and was not in the room I picked it up and put it in the drawer of the sideboard. He did not see me put it in there. I often stash his toys because the next evening when he’s bored and whiny, pulling a toy out of somewhere gets him more interested in it. 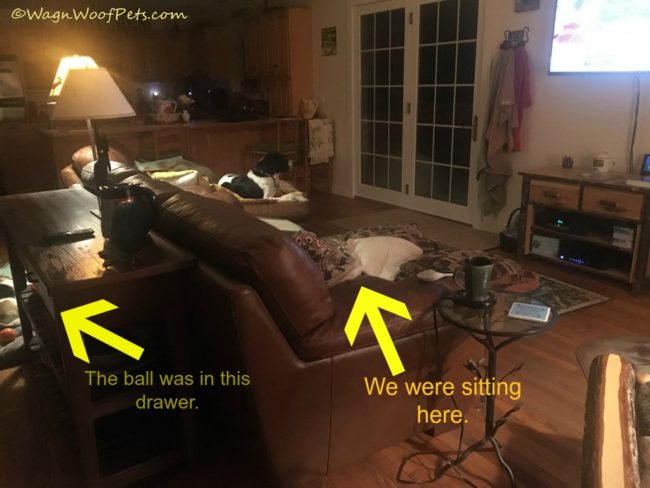 Sitting on the couch this morning, he smelled that ball in the drawer behind us! I know there is no other reason that he went and sat where he did, he has done this type of thing before. Sometimes he remembers where I stashed a toy, but he’s also been known to sniff them out when he does not know. In addition, once I have stashed a toy there once, he will not forget. In this case, I had never put a toy in that drawer before. Next time he’s bored, he’ll probably go sit by that drawer and whine, even if there’s not a toy in there!

His nose continues to amaze me and there is no doubt that we’ll be taking the next Nose Works class at Fenzi this spring! What do you think – is Luke’s nose exceptional or am I just an overly proud dog Mom?