We never had dogs growing up.  But there were still dogs in my life.  Here are two of them:

Our neighbors in NH had a poodle named Tink.  Tink was my first ever pet sitting job!  On occasion Don and Nancy would go away and leave Tink in my care.  I also remember that Don used to take me sailing sometimes, and Tink would join us in that.

I believe Tink must have been a puppy in the above photo, because I remember him being much bigger.  If memory serves correctly, he was a standard poodle, and usually sporting what I believe they call a “puppy clip”, nothing fancy.

It’s kind of funny that the other dog in my life was also a poodle!  Geronimo, the little toy poodle with the big name, belonged to my oldest sister.  Karen didn’t move with the family when we moved to NH, but she visited often.  When she got Geronimo in 1976, from then on, he always came with her.  When she got him, she decided she wanted a different name for him, and she had just watched a movie about the Indian Geronimo, and thought a big name would suit this little dog just fine!

I fondly remember Geronimo running along the back of that couch, and attacking me from behind….with his tongue of course! 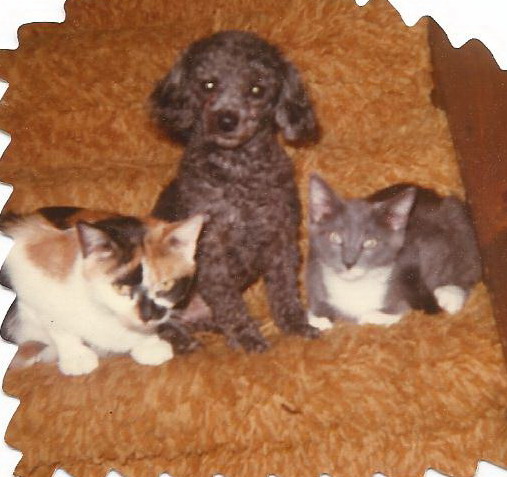 This is Geronimo with his feline companions….Karen’s cat Samantha, on the left, and her roommate Heidi’s cat Caesar, on the right.  I lived with Karen and Heidi for a few months, so these guys were my roomies too.  Later I also lived with my sister and her husband again, so Geronimo and I spent even more time together! 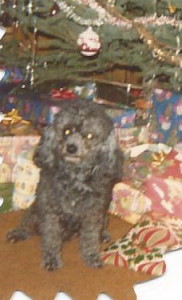 Geronimo lived to be 16 years old, giving my sister many years of love and companionship.  I know she was heartbroken when he passed, and he left an empty spot in all of our lives.