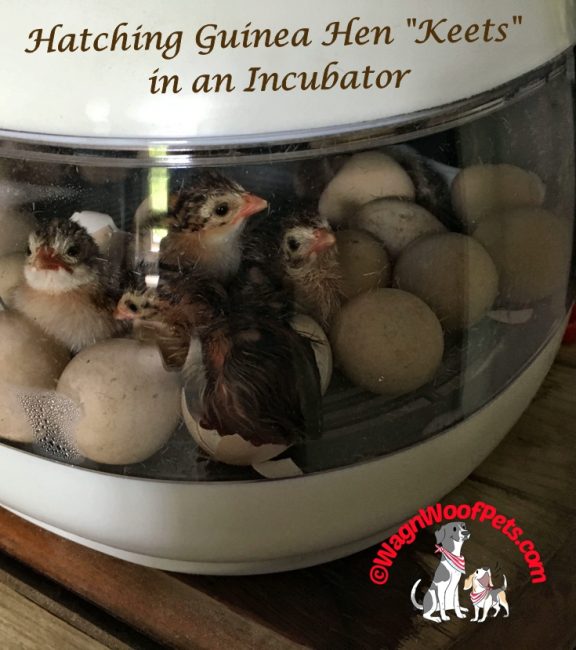 Watching our own little guinea hen “keets” hatch was such a fun experience, we wanted to share! I took a few videos in a row while watching the #5 (out of 6 total) egg hatch. It can take a while from the time you first see an egg moving, so I paused at times when not much was going on and tried to continue when more progress was made. When this video starts, the egg we’re watching has already “pipped”, which means the keet has cracked a hole in it from within. It seems to be a difficult process for them (and it’s no wonder, the shells on guinea eggs are very hard), so lots of rest time is needed in-between each try to get out!

The video is still, however, almost 6 minutes long, so you can skip towards the end if you want (the real action happens about 5 minutes in). One of the fun things about watching the full video is not just the egg itself hatching, but the chirping and antics of the first 4 that were born while that’s going on! Also, at about 2 minutes in you can hear our full-grown guinea hens outside making a racket (that includes the mama and papa to these guys)! We can only imagine how noisy it’s going to be when there are 11 of them at it!

We wondered what was going on after the little one hatched and another one approaches it and starts pecking at it. I wondered, was it: encouraging it to come on out? Trying to pick on it? Just being nosy? If you watch closely, you can see it peck at it and then look like it’s eating something. My best guess is that it was picking off some of the nutrients from the egg insides or shell left on this one. Chicks and keets can survive for 24 hours on the nutrients they have gotten from the eggs. That’s why they can be shipped just after being born. We didn’t leave ours in the incubator that long, once we thought they were dried off and looked nice and fluffy, we moved them to the brooder. We did notice they didn’t seem to eat or drink for a while, but by the next evening they found everything and had at it. They are growing like little weeds now.

Have you ever watched an egg hatch – isn’t it fascinating?