When we got our first group of chickens, we got 4 each of 3 different breeds. As I’ve said before, we could not tell them apart enough to give them each different names, so I mostly call them “Mama” along with part of their breed name. Mama Red for the Rhode Island Reds, Mama G for the Golden Comets, and Mama Buff for the Buff Orpingtons. When we got our next group back in the spring, we got 2 each of 4 different breeds, and in some cases I’ve been finding ways to tell the pairs apart so I could name them. While you’ve been seeing some photos of them along the way, today I thought I’d introduce them all by name (and ask for help for a couple of them)!

These two girls were the ones we expected to lay either green or blue eggs. As it turns out, that’s not always the case, and though they were some of the first to start laying, the eggs have turned out to be a very light cream color. It was not what we were hoping for, but at least they are different! Also, both of them have green legs and that’s how their names were decided on.

The only way I can tell these two apart is by the fact that Blanche has more black in her than Rose. Sometimes I’m not 100% sure which is which if they are not together!

These two made it easier….Kelly has green legs and feet, and Daisy has yellow.

These two have not been named yet because I haven’t figured out how to tell them apart. I thought I’d ask for suggestions from our readers for names, and then try to figure it out!

We hope you enjoyed officially meeting the girls, and please leave a comment….along with name suggestions for the Black Australorps, bonus points for anyone who gets some of the references from the names! 🙂 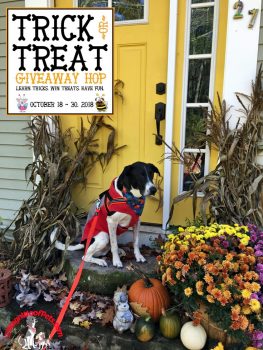 Luke wants to know if you’ve seen him perform his new trick “crawl” yet, and entered the huge Trick or Treat Giveaway Hop. With almost $1500 in prizes available, you don’t want to miss out! Click here to learn more.