We first decided to add guinea hens to our flock two summers ago, and I wrote about some of the reasons we did so in our Post “First Line of Defense – Guinea Fowl”.  One reason I didn’t list was unexpected for us, and it has turned out to be the most important one – they are very entertaining! While they can be a lot of work – they are messy when raising them in the brooder, impossible to catch, and some evenings they can be difficult about going into the coop (my hubby is best at that job, they will often follow him right in); we feel they’re worth it. Not only do they do their jobs of alerting us to predators and eating bugs, they are fun! Last summer I started to tell a few stories about these crazy birds, and this year we’re continuing it.

Last year, in Story 3, I told about our learning curve when our guinea hens started laying eggs. Guinea fowl don’t lay in the coop like the chickens (well, some do, but we have not been that lucky!); they are just a bit more wild. Last year we lost both of our females to predators during their nesting time. We hatched some of our own from the eggs that were left and kept 6 of them. Out of that 6, we got two females again.

This year we had a plan to keep them laying and keep them safe. However, they may have had other ideas of how it was going to go. The plan was this: let them decide where they would first try to lay. If it was a location we didn’t like, we’d remove the eggs. Supposedly, if they know their nest has been found, they’ll move to a different location.

Once they were laying in a place we were happy with, we would mark some of the eggs to leave, so the nest would stay active, and take the fresh ones for eating, selling, or incubating. The running joke between the Dadz and I is whether the guinea hens can count, and if they know how many eggs they should have in there!

The first egg or two showed up in the coop, in the middle of the floor, so we knew it was time. We lucked out when the next eggs were laid in the “barn garden”, our flower garden next to the house. This was where our female Henrietta had her nest last year, though not in the exact same spot. We lost Henrietta because we didn’t collect the eggs and she sat on the nest overnight. We thought she’d be safe so close to the house, but we were sadly wrong. She disappeared one night and Luke and I found the feathers around the yard.

Our other female, Violet, was taken when she was just in the nest laying, so we wanted them to be in a safe place even when laying their eggs. Unlike chickens, guinea hens seem to be on a 24 hour schedule and they lay every single day (chickens do not lay daily, and different breeds lay more than others).

We marked two eggs in the nest and collected the rest. We thought we had succeeded already, but one of the females had other ideas! While the other one, now named Sally, still uses that one, our other female was not to be happy with that. (I am calling her Victoria, because she thinks she’s a queen – you’ll see why).

Now, the way we know that they are in the nest and laying is because the males, or at least whoever the Daddy is, stands guard while she’s in the nest. They often make a racket, so if we follow the noise, we can find where she’s trying to make her new nest. The next area she chose was in the woods behind the garage, closer to where Violet had her nest last year. Foxes sometimes run along the road which is on the other side of those woods, so that was not a location we were happy with. The Dadz took her egg and tore the nest apart. She went back there the next day and laid again! Again, he tore it apart, and this time she finally gave up on it.

She went back to the barn garden next, but she wasn’t happy with that (partially because she and Sally seemed to be on the same schedule, so she couldn’t get in the nest). Her eggs were found outside it more than once. But she was still on the hunt for a new location.

This is where some odd things happened.  I am starting to understand now why it’s difficult to find information about guinea hens’ nesting habits: because it’s hard to figure out!

First of all, I noticed on more than one occasion that no one was guarding Sally when she was on the nest. I heard her calling from there and went out and yelled at the boys to get over there and watch her! But when Victoria was looking for a place, or on the nest, all the older boys from our first group, except for Harry, are on guard! I have come to believe that Harry Who (Violet’s “widower”) is the baby Daddy for Sally. You see, we have trouble knowing which bird is Harry these days, because all of the new birds are the same color as him. But one day when he was guarding the nest (he seems to be doing that all the time now), I went out onto the porch and said to him “Harry Who – is that you?”, and I kid you not, that bird marched all the way over from the garden and right onto the step in front of me and looked up at me! So I truly believe it’s him (plus he was a little slack in guarding Violet so that seems to be his MO!). He’s been doing much better now though.

Back to the point: Pumpkin Pied is the Daddy for Victoria (we’ve seen them mate, so we know for sure here, plus he’s the one always closest to the nest). The next spot Victoria decided to lay in was way down the bottom of the hill from the house, on the edge of the woods, in a huge brush pile. Um, no, Victoria. So more than once the Dadz once again messed up her nest and we took all the eggs. It’s also funny to note that occasionally we find a chicken egg in these nests too!

This is the real funny part. I had been working in the gardens all day on one of our rare beautiful sunny and warm days. By late afternoon I was tired, so I made a cup of coffee and sat out in the sun on the deck. That’s when the show began. I noticed Victoria making funny little noises, kind of a peeping, as she cruised around the yard with Pumpkin Pied and the two white boys following her. One time they settled inside the coop in a corner and I thought she would lay her egg there. Maybe because I saw her, she changed her mind.

For probably at least an hour or more, she went from place to place in the yard, making the same funny noises, with those boys following her every step. She’d stop in an area, then move on. She went round and round the yard, considered the barn garden, but again changed her mind. I’m pretty sure she wore those guinea hen boys out, and it was hysterical. Occasionally the other younger boys would join in the parade, and maybe even Harry and Sally, but it was the older boys that never gave up her pursuit. I’m pretty sure she was enjoying herself thoroughly!

She finally settled on the brush pile again that day, and we collected the egg later. Since then she’d still been on the move, back to the barn garden, we thought the brush pile, but we couldn’t find the egg. Then just the other day they were making a racket on the other side of the stone wall over near the coop and I saw two areas under small trees that looked like they’d been prepared. They moved on when they saw me, but she did go back later and use one of those spots.

We’re not thrilled with that spot, because we can’t really see over there, but at least it’s closer to the house. Honestly, we’re throwing up our hands at this point! Many of the other areas I’ve seen her cruising around are in the woods and much further from the house, so we feel like we can at least monitor this one a bit better. We can pretty much figure out when she’s on the nest because her entourage will be making their racket. As long as she doesn’t try to sit on the eggs, we hope she’ll be OK. Plus she has those boys watching her. When Henrietta sat on her nest at night, the boys went in the coop!

What I simply cannot understand is why Victoria gets all the attention, and Sally is usually left on her own with only Harry to watch over her. Once in a while, the other boys will join in guarding her, but I suspect Queen Victoria might drag them away in jealousy. Now that she has settled on that spot, I have noticed that both she and Sally seem to be laying their eggs around the same time.

When we had the other two females last year, it was also odd that Harry and Violet were always off on their own, but after Violet was gone, and Henrietta took over, all of the boys followed her around too. At the time, we had figured it was because she was the only female left. Now I’m left wondering and watching to see how this all plays out this year!

It’s also quite interesting that Pumpkin and Harry seem to be the chosen mates again this year. They must be dominant. Some squabbling goes on before mating season starts, but that’s a story for another day.

By the way, we didn’t want to hatch more eggs in our incubator unless we had buyers for them. I don’t think we’ll grow our guinea flock at this point. We did have some interest, but no one has followed through. We also had people interested in buying the eggs for hatching themselves, but they also didn’t come through. However, I put some guinea eggs out in our farm stand for sale “just for the heck of it”, as I said to my hubby, and they’ve been selling! 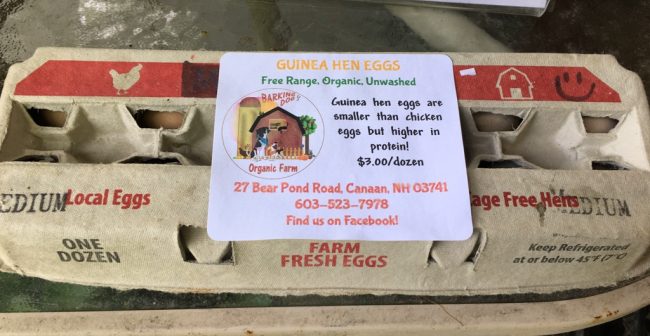 Once in a while, Sally sits on the nest like she thinks she’s going to hatch eggs, but luckily she doesn’t stay on there long. Our #1 priority is to keep these females safe, and it will be interesting to see how long they continue to lay their eggs. They don’t lay year-round like chickens, but we think they will continue to lay through the summer. Time will tell, and we’ll enjoy the show (and the eggs!) while it lasts. 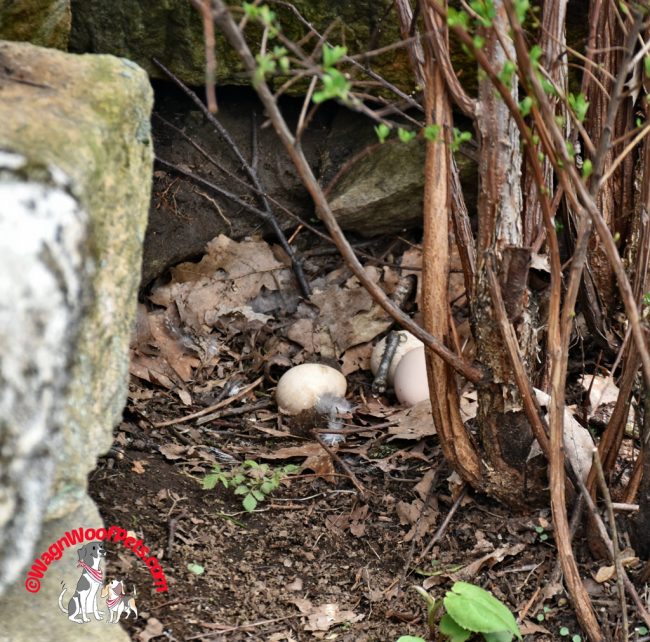 If you enjoyed this story and missed the earlier ones, here are the links:

Story 1 – The Sad But Hopeful Tale of Harry Who