Story 5 – An Endless Collection of Adventures

I’ve told most of the big stories about these crazy birds, and though they continue to entertain every day, the new group of ten has settled into their routines and haven’t been getting into too much trouble lately. One of my favorite things about them is that they always come running when we go outside or get home from somewhere. We’re not allowed to touch them, but it’s still nice to know they are happy to see us!

It’s been interesting to observe as well that they don’t like to be shut out of the coop, when we’re keeping the chickens in. After we lost the two females, it was still usually easy to get the 4 boys out of the coop in the morning on their own; until we hatched the new six. They wanted to stay with them. Once the newbies were able to join in the free ranging, it became even more challenging to separate them to let them out while keeping the chickens in. Because of predators, as well as because of egg laying (the chickens will lay eggs in random places sometimes when they are free ranging), we kept the girls in longer.

For a while we would put one feeder in the garage for the guineas when they were out. But we got tired of feeding expensive organic feed to the squirrels and chipmunks, so stopped doing that! I don’t know if that’s why the guineas didn’t like to be shut out of the coop and run (the small fenced in yard attached to the coop) or not. They would pace back and forth in the run until let out (and they are like little brats harassing the chickens, so another reason to separate them), but once they were out, I would often see them gathered at the coop door, or up on top of the run.

Things have settled down now, and I’m home more since my summer job ended, so we let the chickens out earlier. The guineas seem much happier, so I do really think they enjoy being with the chickens! I have a few more fun short stories to share about the adventures they got into last summer and spring, before the newbies joined the flock.

In our last story, Story 4, I wrote about how the guinea boys chased deer out of the yard. But there was another time when I heard their squawking arise outside, and it was during the time the foxes had been around. I ran right to the door and saw a small brown animal near the fence with the guineas advancing towards it. I yelled to my hubby “fox!!!” so we could both run outside to chase it off.

Then as I headed out one door, and hubby out the other, I realized it was not a fox but a fawn! And the poor thing was throwing itself against the chain link fence – it was petrified of those crazy birds marching at it!  I started yelling to hubby “it’s a deer, it’s a deer” and he couldn’t hear me right and kept running that way. I didn’t want him to scare the poor thing even more! As I was yelling to clarify to him, the fawn finally found its way along the fence and away from the guinea gang.

Later that exact same day, we were sitting outside, and Luke was with us. The guineas were hanging around and suddenly Pumpkin Pied thought flying over the fence into Luke’s yard would be a good idea. Not! Luke was instantly in pursuit of him, I was yelling at both Luke to “leave it” and Pumpkin to “get out of the yard”. Thank goodness Luke never caught up with Pumpkin and he finally got smart and flew out of the yard. My hubby and I had a good laugh when I pointed out it’s fortunate we don’t have close neighbors, because so much yelling in one day would have them thinking we were insane! I imagine if the wind was blowing just right, they could hear us, and they really must think we are crazy if so!

The Dadz goes to work quite early, so I usually go back to sleep after he leaves. One of those mornings I woke up and through my morning bleariness I thought I heard guinea hens squawking outside the front window. How could that be? They should still be in the coop! Once I figured out that I was really awake, I jumped out of bed, and sure enough there was Henrietta and one of the boys outside the window. What the heck?

Then immediately it occurred to me if they were out, then the coop must be open somewhere, and that must mean a predator had broken in! I ran outside in a panic to the coop, only to find the door closed, all the windows intact, and everyone else in the coop fine. How the heck did those two get out?? I did notice the fan in the window was askew, and since that is right next to the door handle which is the type that you push on to open from the inside, I concluded that those rowdies must have flown into the door, hit the handle just right, and opened it. Apparently, they were the only two able to get out before the door closed again!

While the foxes have done their damage here (we lost a total of four birds to them), there was more than one instance when the guinea hens did chase them away. One day I heard squawking outside my office window, towards the end of the driveway. By the time I got outside, all I saw was a fox running down the road like it wanted to be anywhere but near those crazy birds!

Now that we have a flock of ten, I think we might find next year is not as bad for predators – that is our hope anyway, but we will remain diligent of course. 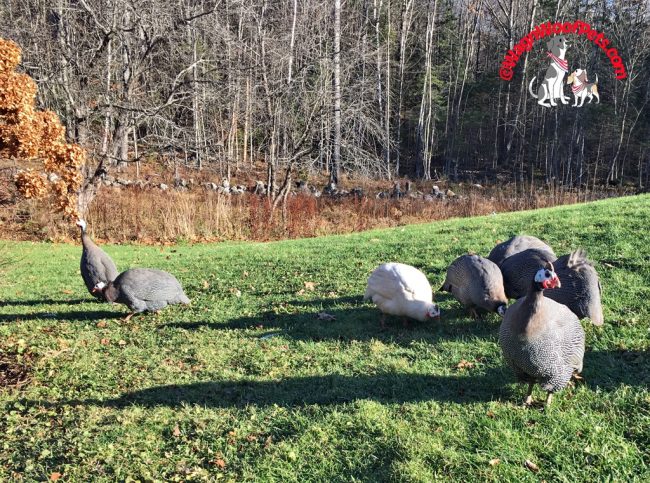 We Are Afraid of the Dark

We went to my sisters for a family get together one afternoon. The chickens had been put in the coop, but the guineas were impossible to get back in before we left. So, we left one garage door open with the light on inside. We knew we’d be home after dark, but we expected they would go in the garage. Remember how I said they don’t like being shut out of the coop? Well, they were not happy about that whole situation, and when we got home, they were on top of the run, and they refused to come down! Now it’s said that they are afraid of the dark because they can’t see well in it and I believe that to be true (that’s why we left the garage light on!). We tried to herd them off using a broom, but all that did was drive them onto the garage roof.

We had to get the ladder out to keep trying to herd them off, but that didn’t work either. We were just about to give up, not sure what to do next, and both just started to walk away to do other things while figuring something out. They finally decided to fly down and then we were able to herd them into the lighted coop. Thank goodness! There was no way I would have slept that night if we hadn’t been able to get them in!

As you can tell, there is never a dull moment around here with these wild and crazy birds. I have fallen completely in love with them and now can’t imagine our farm without guinea hens on it. It was not that long ago that hubby saw the whole guinea gang down the road just a little bit, carrying on as usual, and he was pretty sure that they were trying to herd some wandering chickens back towards the house. While there are times I’m sure the chickens don’t love them, since they like to chase and pull out their tail feathers, I really do think they do their job of helping to protect the entire flock quite well. They are priceless in so many ways! 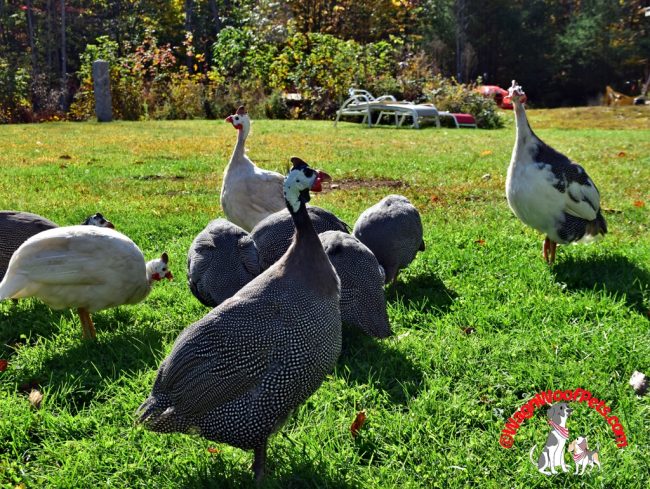 If you missed our earlier stories, here are the links: