(I am a day late for the Blog the Change for Animals blog hop, but I had a post planned and wanted to go ahead with it regardless of missing out on linking my post to the hop.)

Change is coming for animals.  It may not be coming as quickly as we’d like, but it is coming.  Volunteers and organizations are working tirelessly to bring about this change.  Sometimes it is overwhelming all that still needs to be done to protect animals, but every little thing that happens is a step towards a world with no animal cruelty at all.  My focus is once again on puppy mills today.

The evidence is here:

1. The state of West Virginia has passed a bill to help put an end to puppy mills.  This bill requires licensing and permitting for commercial dog breeders, as well as limiting the number of dogs that can be kept for breeding; and setting standards for humane and sanitary conditions.  This bill has passed the Senate and both Houses, and at last word was on its way to the governor.

3. The group The Puppy Mill Project was instrumental in getting a major pet store in the city of Chicago to stop selling puppies from puppy mills.  This store, called Collar and Leash, is a family owned Chicago institution; they had a grand re-opening and now will be holding adoption events only.

4. Back in December of 2012, the state of Ohio passed major puppy mill legislation.  Their law requires licensing and inspection of high volume breeders, those that sell 60 dogs or produce nine litters in a year.  It also established an advisory board to help develop standards on housing, nutrition, exercise and other general care.  This law also prohibits anyone convicted of animal cruelty in the past 20 years to become licensed! 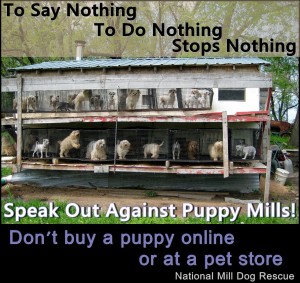 As I’ve said before, not everyone is an activist but there are things we all can do.  April is National Volunteer month, so this is a great time to start volunteering, or supporting volunteers in whatever way you can. 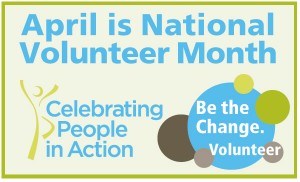 I want to give a shout out to a wonderful group in my neighboring state of Maine:  Maine Citizens Against Puppy Mills.  Here is a true grassroots organization, a great group of people out doing everything they can, including peaceful protests at pet stores which sell puppy mill puppies in their state.  When they are not doing that, they are educating and sharing information about national legislation as well as legislation in other states, letting their followers know how they can help.  Take a look at their Facebook page and see all the good they are doing.

Whether nationally, or on a state level, everything that is being done to stop puppy mills is a step forward.  From the national PUPS act legislation to each individual state passing their own laws, we are working on moving forward to being a country, hopefully a world,  that does not accept mistreatment of animals in any way, shape, or form.  Each individual only needs to do what they can:

We can’t reiterate enough that the best way to help this change along is DON’T SHOP: ADOPT, and to spread that word far and wide.

I am including the link for the Be the Change blog hop, so you can read some of the other great posts from bloggers for April 15th.  Four times a year bloggers come together to support animals in need, to “be the change” for animals.  You can join in by reading and commenting on these blogs, by clicking on the links below.