The Benefits of Snow on the Farm

Even though I’m not a winter enthusiast, it’s always been my thought that if it’s going to be cold, it might as well snow too. Snow is so much prettier than a drab brown and gray landscape! However, beauty aside, there are far more important reasons that snow can be a true benefit on the farm. 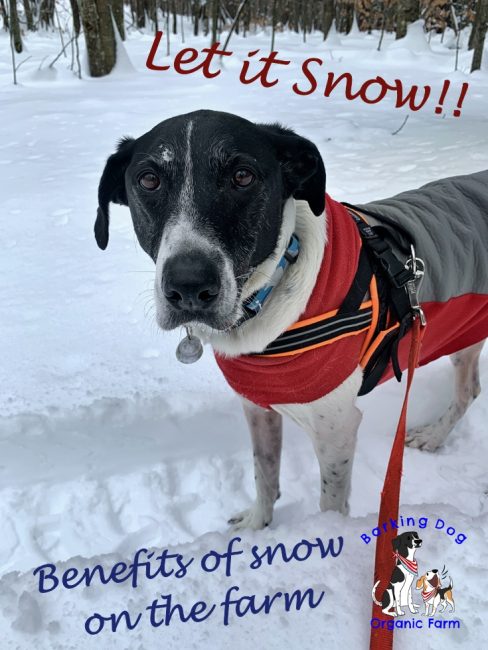 Benefits for the Birds

Neither the chickens nor guinea hens are fans of the snow. They were not impressed when we recently got over two feet of snow in one day! They were fine with the fact that they had to stay in the coop that day. The next day we were able to clear their way to come outdoors again, but for the most part, they just moved from the coop to the garage!

However, there are advantages to the snow for them. First of all, when we shovel and clear snow, we’ll pile it up against the edge of the coop and the garage to help keep both areas more insulated for warmth. There is no kind of heat in the coop during the winter, other than the birds’ own body heat, and heat from composting leaves and straw on the floor of the coop. We use the “deep litter” method in our coop, which means we let everything just pile up over the winter, adding more straw or pine shavings and keeping things stirred around. This not only generates some heat, but it gives us wonderful compost for our garden in the spring!

That much snow also keeps the predators away since it’s not easy for them to travel in it. It’s not foolproof since they can travel the road and into our driveway at times. The birds will stick to the area between the coop and the garage where they are not seen from the road though. The wildlife will eventually find our walking trails once we’ve established some too.

While they do have their ways to get around, the other good thing is that wildlife tracks are easily seen in the snow, so we can know what kind of animals are around. After this storm, we only saw deer and turkey tracks, so we could relax just a bit when the birds were free ranging.

Two days after the storm my hubby was able to take his four-wheeler around the woods and make some trails so Luke and I could go for a walk. This snow was simply too deep and soft even for snowshoes, so it was the only way we could get out there.

The snow also makes a beautiful white backdrop for our woods, and we can look down and spot wildlife more easily as well. The day Luke and I had our first walk after the storm, I quickly knew what these tracks seen below were, because I had been watching some wild turkeys down in the woods that morning, and knew which direction they had walked off in.

We do also have trail cameras to help with that, but with the snow on the ground leaving tracks behind, we get a better idea of where the active areas to watch are.

While we must be careful of letting him overdo it, walking in the snow is great exercise for Luke! Luke has luxating patella’s (bad knees) so running on anything slippery is not ideal for him. However, we try to let him just “be a dog” (with limits), and he was so happy out romping in that fresh snow that morning! He bounded through it just like a deer. We haven’t seen any sign that it was hard on his knees, it’s usually ice more than snow that will make them pop out of place, and this was a soft snow too.

I wish I’d had some photos of this, but there was so much snow on our deck I couldn’t just step out there to snap a shot!

He enjoyed our walk in the woods as well, he can really get himself trucking on those trails Dad made! It was more difficult for me to walk and I had trouble keeping up with him! We were both exhausted by the time we got back to the house. We don’t get as much exercise in the winter as other times of year, so it’s great if when we do get out, it’s a bit more strenuous!

Cold weather alone does not make those nasty ticks go dormant for the winter; a good snow cover is the only thing that will finally make them go away. They can live in the leaf litter even in cold temperatures. It’s such a relief when we can finally stop spraying Luke with repellent before every walk, and I know he doesn’t miss that step either! Sustained colder temperatures can be another factor, actually killing the ticks, and reducing their numbers for the next spring as well.

Unfortunately, a constant snow cover from fall through spring can help the ticks to survive better, snow creates that same insulating factor for them in the leaf litter as it does for our buildings. Later snow can make that better, so it’s kind of a trade off!

In the end, Mother Nature is the only one that is in control of it all anyway. She thought it would be pretty funny to follow up our 2 – 4 foot snowstorm across NH with rain just a week later on Christmas Eve and Christmas. I was shocked when I got up on Christmas morning and looked out the window to see bare ground everywhere!

The birds sure were happy about that, even if we humans were not. It was also warm, in the 50’s, on Christmas day, so despite off and on rain, the birds were happily out in the yard getting wet. For us, at least walks are easier, though I’d still rather have at least some snow on the ground!

We wonder what Mother Nature has planned for the new year? Bring it on!

Happy New Year from all of us here on the farm!