Not a season goes by here in New England when I’m not complaining about the weather, and this summer is no different. If you don’t like the heat, you might want to move here. We’ve had some hot and humid spells here and there, but they only last a few days and next thing we know it feels like fall. The mornings are cool and the afternoons hot in the sun. That’s all fine, if I only knew how to dress for the day, and if swimming wasn’t the activity I wanted to focus on with the dogs this year. I head out dressed for a cool walk only to find out it’s really hot in the sun!

In spite of that, maybe you’ve seen the photos in previous posts, we’ve been getting some swimming in. The hot spells just don’t always seem to fall at the times when I’m not working or busy and have time to take the dogs for an outing. I just can’t seem to get into a routine of when to walk, when to play, and when to just chill out. Listening to the weathermen doesn’t help much, as you probably know.

However, we’ve been keeping busy and we’ve added some new activities as well. Everyone gets a big outing at least once a week, either a walk or a swim with the Momz. There are short walks as I have time here and there. It used to always be that we’d fill that in with lots of fetch play in the yard and cooling off in the pool, but Cricket’s on and off limp has returned so we’ve had to curtail that somewhat.

She’s had this limp before and it always cleared up after a couple days of rest or easy play only. But we let her overdo it a couple weekends ago, and now it is showing up far more often. I see a visit to the vet coming soon, and  I dread that. Our little beagle LIVES to play ball, and the thought of having to restrict her exercise just breaks my heart. It also makes it difficult to get the other two dogs the exercise they need, without making her feel left out and upset. I will probably have to enlist the hubby’s help to split them up and get them each what they need. Right now I think walks are OK for her and other light activities, unless the vet tells us otherwise. I’ve also been teaching her to heel when we’ve been walking, just to make it a bit more interesting.

In the past, Sheba had been our girl usually on restricted activity, with her arthritis. But we’ve been increasing hers and she’s doing  great. We even did a 3.5 mile walk with my sister last week, plus a short swim in there, and she did great! I had originally planned on taking all three dogs but wasn’t sure if Cricket should go that far, but also didn’t want to leave her home alone. These are the typical difficulties of having multiple dogs, aging dogs, and an odd number to boot. I left Luke home with Cricket, but felt bad about it. Sometimes I just have to take turns with them, and it was Sheba’s turn.

Luke is young, he needs more exercise than his sisters. The girls are usually ready to call it a day by evening, but Luke still has some energy left, so we take him outside and get him to run around with his Tuggo toy, or if we can get him going, he will do some serious zoomies around the yard (I wanted to get video of that but haven’t succeeded yet). He also has some other activities throughout the days; he is learning a new trick, putting away his toys. That is going well, and I’ll fill you in more on that for the Positive Pet Training hop coming up the first week of August (hopefully with video too).

We got a ramp for the car to help Sheba getting in and out. I’m training all of the dogs to use it. Luke has bad knees, and Cricket may be small enough to pick up in and out of the car, but what if we go swimming? Picking up a soaking wet dog is not high on my list of fun! I’ll be writing a review on this ramp next month (giveaway too!), and will tell more about how we are training them to use it. It gives us something else to do and I think learning new things like that is good for them mentally, as well as it gets them moving just a bit more. I couldn’t get a photo of Sheba on the ramp, since she is the most nervous about it, and I just couldn’t coordinate it alone! But the other two have it down so far (it’s not on the car yet).

One last thing we’re trying is agility “weave poles”.  We got some in the home agility set that we won last year, and I thought it would be fun for all of the dogs to try to learn to do them (trust me, none of them are going fast enough yet for it to be too much for Cricket’s injury). Since our training involves treats, they all get excited about it and I think they’re having fun (even if they’re not doing that well!). We’ve had their tunnels out as well at times, in between rain. I couldn’t get any photos of them weaving, again, not coordinated enough! 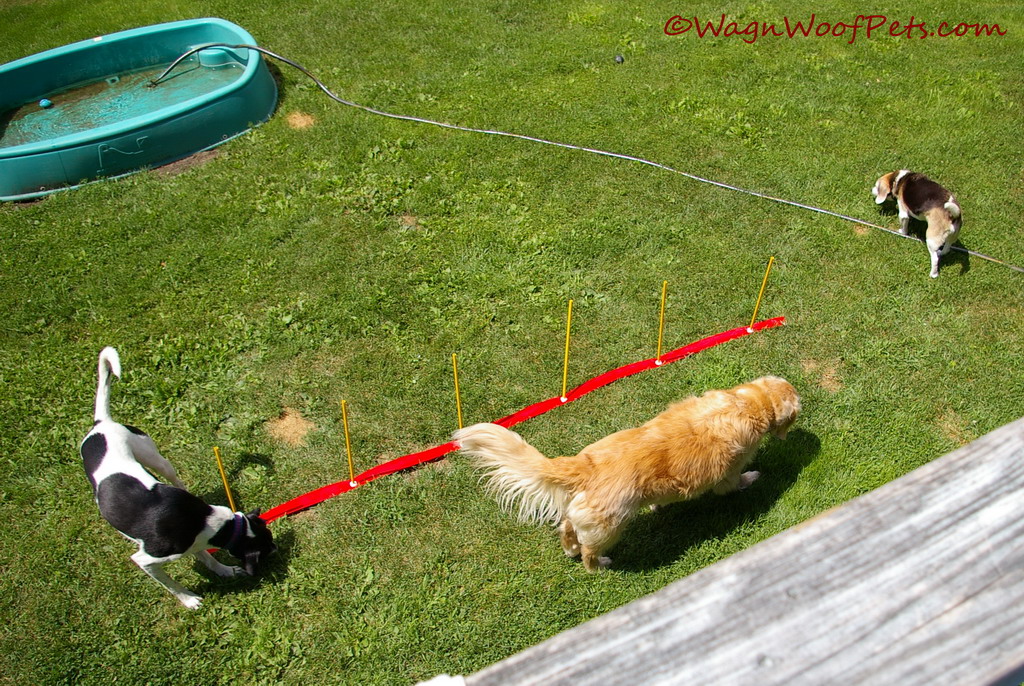 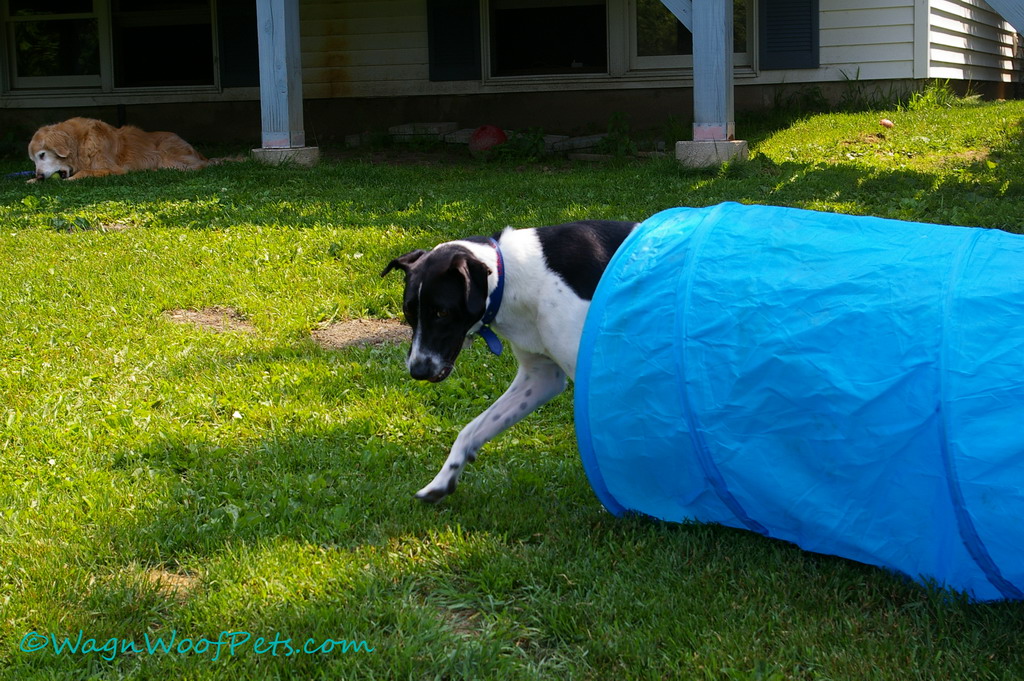 I’m learning to be more flexible. Sometimes my blog posts have been going up later than I’d like, but I’m trying to put the dogs’ needs first, and if it is hot, that means exercise comes first in the morning when I would normally write (I’m not sure I’ll ever get ahead on my writing!). Maybe before the summer is over, Mother Nature will have made up her mind, Cricket will be healed, and we can get into a routine. But for now, we’re just doing the best we can to get as much fresh air and exercise of sorts as we can! 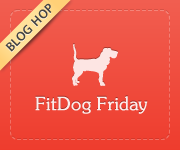