We like to think we have our own little paradise here at our home. Our very large fenced in yard provides plenty of room for three or more dogs to run, play fetch and tug-o-war, or just explore the smells of the outdoors. With everything going on right now, I decided to keep the dogs’ birthdays low key this year. So even though we decided to stay home and celebrate quietly, we still had to do something! Because of the girls’ arthritis, we’ve been keeping play sessions shorter lately, but to make their birthdays special we decided to throw caution to the wind and give them extra play time.

They love nothing better than when the Momz and Dadz are both out in the yard, even if we’re doing other things. It’s the time of year that we need to clean up the yard, and with our house on the market we needed to do a little extra too. So we were able to multi-task, cleaning up the gardens and yard while playing fetch with the dogs. The pool did sadly have to get put away, but the dogs were pretty happy when Dadz didn’t latch the garden gate properly, and they got to run in there and smell around while we were working.

Normally I don’t let them in there when things are growing, but I’m also concerned that the fence is not very high, and Luke can really jump. The girls were distracted with playing ball anyway, and we tried to keep a closer eye on Luke. He had plenty to smell in the garden area and as long as no wildlife showed up in the yard, he wouldn’t have any reason to jump.

Digging up the last of the carrots was on my list for that day. Remember I said that I might let “Farmer Luke” dig some up just for fun? I was still thinking about it, but as we were distracted doing other things, he took it upon himself to do it anyway! All of the sudden we noticed him romping around gleefully….which means he’s found something special, and then we heard crunching. Sure enough, he had dug up a carrot on his own! I kicked myself for not having my phone in my pocket, so no pictures of that fun.

Along with the garden fun and extra play time which was over the weekend, on their actual birthdays Sheba and Luke each got a new toy, and they got special dinners with canned food added to their regular kibble. I bought a few toys, and let Sheba select one from a box. She chose a stuffed bear. 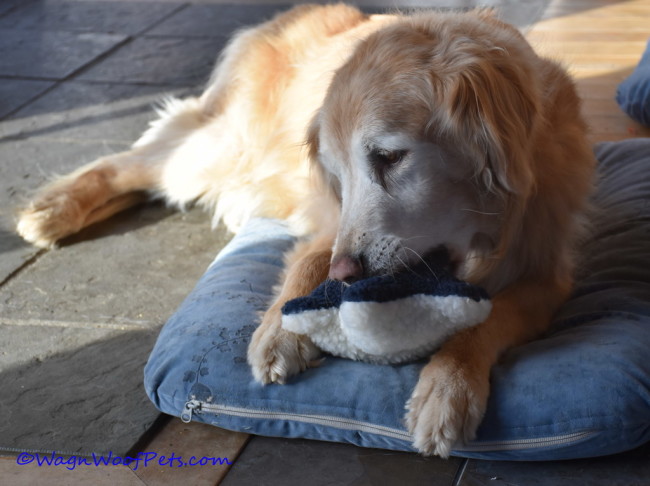 I wanted Luke to have this pig. He had a blast with it. He can be so mature and is so good at listening, when I asked him to “leave it” and pose for some nice photos, he did! However, pig didn’t live much longer than the Bear did. Can you see the pig smiling in that photo? He wouldn’t have been smiling had he known just what his fate was going to be. But the point was for them to have birthday fun, and they did what they consider fun! 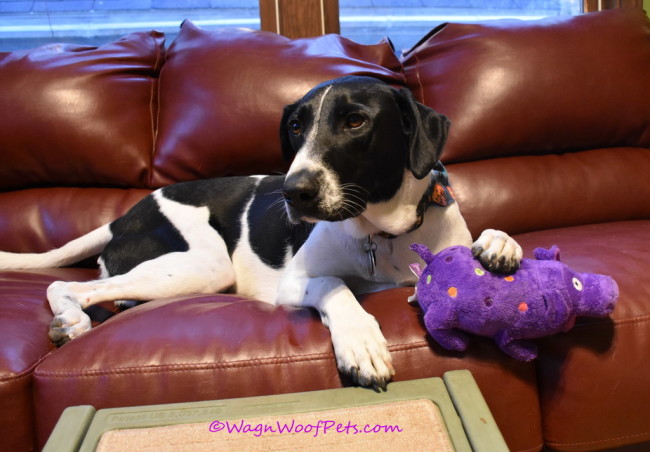 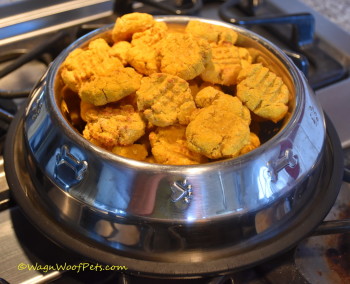 On Sheba’s birthday, I made a batch of cookies, which they’ve been enjoying all week. I made Pumpkin Apple Cinnamon Grain Free treats. This was a new recipe for me, and used coconut flour. The recipe says that flour can be hard to work with, and they were right! I had been out late with the girls the night before and didn’t have the ambition to fight with it, so instead of rolling it out, I made it into balls and flattened them with a fork like my Mom used to do with peanut butter cookies. Trust me, the dogs didn’t care what they look like, and they love them. You can find that recipe from K9 Instinct by clicking here.

Our celebration lasted from the Saturday, the day before Sheba’s birthday, until Luke’s birthday on Tuesday (and they’re still getting cookies!). The good news is that even with all the extra play time, we never saw either of the girls limping! I was worried about them overdoing it but they didn’t. We had thought about switching Cricket’s joint supplement when we weren’t seeing the improvement we wanted, but we decided to give it a full 6 weeks on the stronger dose, and we’re glad we stuck it out. It seems our two 11 year old girls can both pretty much keep up with their now 2 year old brother, who is definitely helping to keep them young at heart!

**PS….Sheba and Luke want to thank everyone who left them wonderful birthday wishes here and on social media!!**