Oh my gosh, what a weekend we had! While we were not thrilled about all our snow melting, we couldn’t help but enjoy the temperatures in the 50’s. The best part was that we did not get all the rain they were predicting; it rained a little bit overnight on Saturday but that was it. If you saw our photos on Friday, you’ll be amazed by how much difference a day or two can make!

The chickens and guinea hens were beside themselves with glee over the warmer temperatures and returning bare ground. It wasn’t quite as good for poor Luke. Saturday mornings the Dadz usually walks him while I go off to pick up work for the week. However, the snow was just too deep and soft to risk him walking in it with his bad knees.

By Sunday morning, however, a lot of that snow had melted. With those temperatures and even a little sunshine, there was no way I was not giving it a try. Conditions alternated between mud, snow, and ice; so while we couldn’t get too long of a walk in we did get out there for a bit. His poor knee did pop out once, so we had to err on the side of caution and keep it short (and keep him out of the deeper snow in the woods).

It was a perfect morning to get out and do some chores. While there’s not a lot to do in the winter, it was a great time to change out the nesting boxes, putting in clean straw, and give the coop a good raking and some fresh straw. We use what they call the “deep litter” method in the winter. That means we put a deep layer of straw and dry leaves in the coop in the fall, and it doesn’t get changed out all winter. We rake it to move it around and add fresh straw as needed. This helps to keep the coop warmer, since the waste breaks down into compost creating heat. The bonus is that the compost can go right onto our garden when the coop gets cleaned out in the spring! 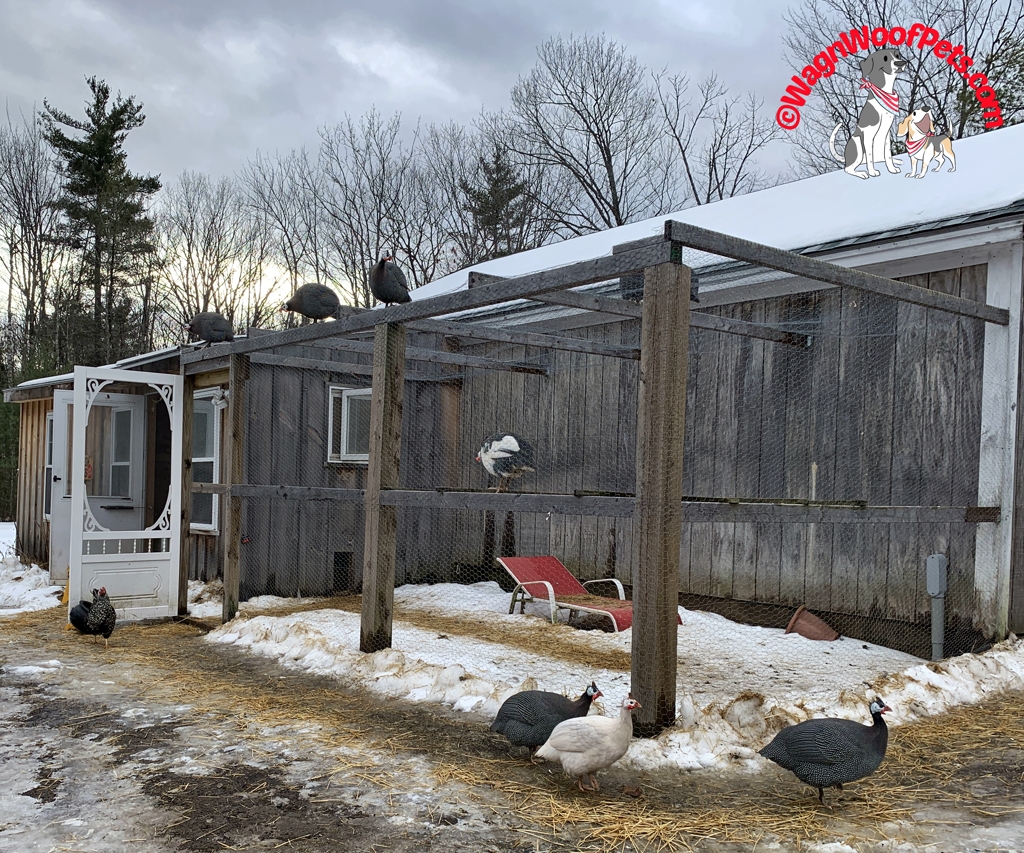 It was also nice to be able to open the coop windows to air it out some, and we even let some fresh air into the house! A contractor once told us that airing out your house in the winter was a great way to save on your heating bill. His claim was that fresh air heats better than stale. I just enjoy the smell of it, and the feeling that we’re hopefully getting rid of some germs that might be lingering in the air!

I’m not sure what we’re going to end up with for walking conditions. By Sunday afternoon, the clouds had moved back in, the wind picked up, and the temperature was dropping.  I’m hoping enough has melted during the day on Sunday to give us some clear paths and compact the snow in the woods, but we may end up with more ice than anything. The birds will be happy with bare ground for a while around the yard (our walking trails don’t get all the sun that the yard does), since it looks like there won’t be any more storms until the end of the week.

It’s anybody’s guess what Mother Nature is going to throw at us next, so it’s one day at a time on our little farm!