So here we are, just about half way through Idita-Walk 2013.  You may see my post Motivation: Idita-Walk if you don’t already know what this is all about!

*(Note:  when I first posted this, I was at 270 minutes done, 779 to go.  The ticker automatically updated when I’ve added minutes since then.)  Ok, so 270 minutes done with 779 to go may not sound so great.  Just over a quarter of the way there?  Really, that is pretty much where I expected I would be at this point.  February is a busy month for me as a bookkeeper, and I am still helping clients get their
information together for their taxes.  I’m not going to waste time on a bunch of excuses (I could come up with many) because I know others have far better ones than I do anyway.  Things are settling down though; and the weather here in New Hampshire is improving.  We had some snow and some cold, windy days in February.  The snow doesn’t slow me down (I have snowshoes), but the cold and wind does. However, for the past week the temperatures have been quite improved.  The last few days, even when it’s been snowing, have reached above freezing. 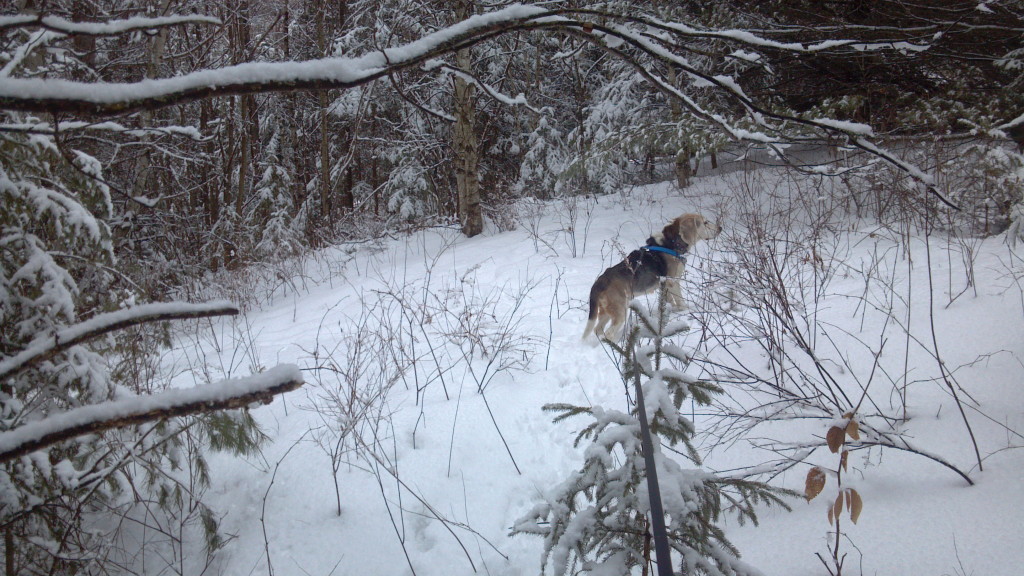 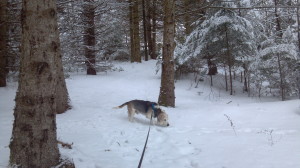 With almost 5 weeks/weekends in March left to reach my goal; that is an average of less than 3 hours/week that I need to get out. That is totally do-able!  My sister will be helping me out starting this weekend, so I have some human company on some longer walks.  The dogs will listen to me jabber on, but they are not very responsive.  I’m not really sure they are listening anyway.  They have better things to do like smell stuff.

My beagle Kobi has been with me most of the way.  Twice when we’ve had some 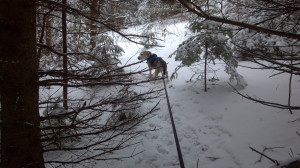 bigger snow storms, I have gone out on my own to blaze trails around our property.  Kobi is over 12 years old now, so I don’t want him to have to plow through the deep snow; or follow me.  When he follows me, he often steps on the back of my snowshoe.  Those of you who have done this may know what happens then.  Yes, I go down. You may also know that it’s not easy to get back up in unpacked snow.  I do always take a ski pole with me.  That aids in the getting up, and also can slow me down on the downhills so I don’t fall then (yes, I can also fall even without Kobi’s help).  The ski pole is also handy for pushing tree branches out of the way! 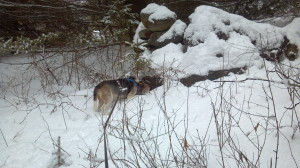 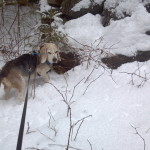 I am so glad I signed up to do this.  It is exactly what I needed for motivation to get outside moving.  Winter really is beautiful, and once I get us out there we completely enjoy ourselves.  Though most of the time I prefer to be inside where it’s warm and cozy and admire the beauty from there.  Thursday morning was a perfect example of why it’s better to get outside.  You can’t admire the beauty of the trees weighed down with snow quite so much as when you’re in there amongst them.  I headed out earlier than usual that morning, as it was quite warm for a February morning.  Usually I head out late morning when it has warmed up some, but that day I got out there just after 9am.  A few inches of fresh snow had fallen the day before, so I headed out alone to blaze some new trails for Kobi for the next time, on our own property.  It was absolutely beautiful with the branches covered in white, and the drip, drip, dripping of the snow as the sunshine warmed things up. 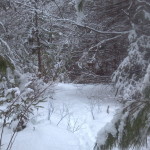 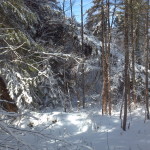 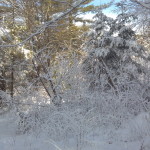 As much as I missed Kobi’s companionship, it was easier to blaze some new routes when I didn’t have to worry about the leash getting wrapped around trees!  In addition to that, Kobi likes to stick to the trails, and sometimes when I try to go a different way he plants his feet in, and won’t go the way I want him to!  Plus with him there is a lot of stopping to smell every little thing.  I can also take photos better when I have two hands to use.  Kobi is a beagle who follows his nose, so he never gets off leash; and I have to do some acrobatics to take photos while holding on to him (and he often gets impatient waiting for me)!  I have included some of those photos, even without Kobi, because the fresh snow was just breathtaking. 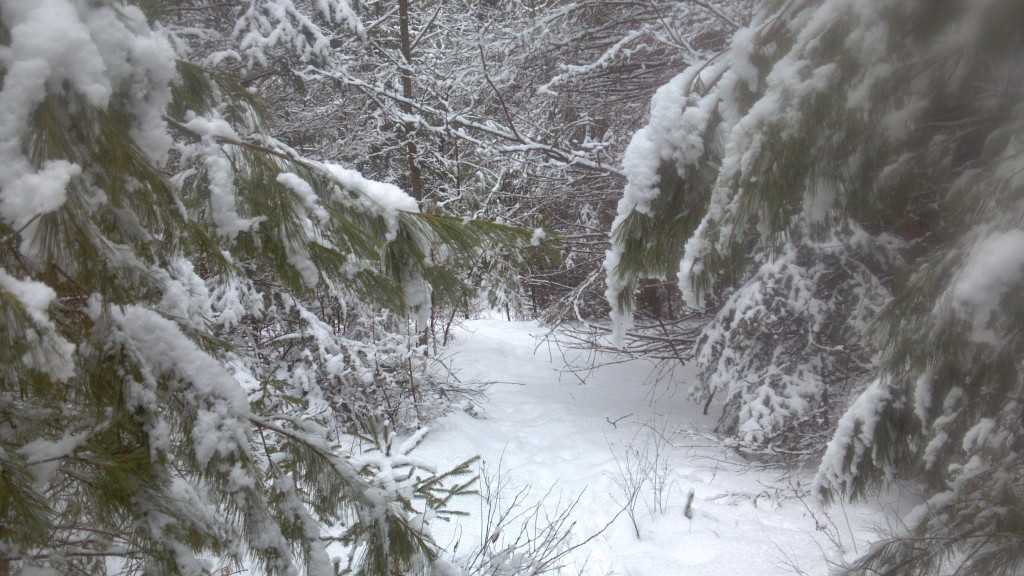 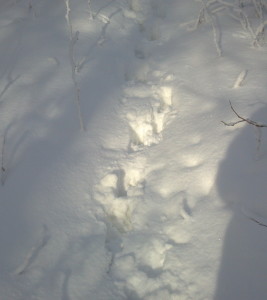 That day I was able to follow our old trails somewhat.  Once in a while I would get confused by some deer tracks going a different way.  There were plenty of deer tracks down there, many very fresh (from the previous night after the snow was done).   I also saw what I think were fox tracks.  They look like a small to medium dog’s tracks.  At one point there were some large canine tracks.  I am not sure if it was a larger fox, or if it was just because the snow was deeper.  Perhaps one of the neighbor’s dogs had been out there exploring. 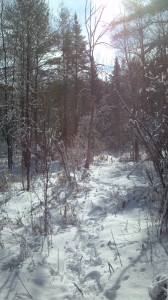 I tracked over our old trails, and I made some new ones also.  That will give Kobi and I some variety when we get out there again.  We don’t have a lot of property (less than 2 acres) but we can spend a good 30-45 minutes out there just exploring our own woods.  If I can do that on the two days per week that I work from home, and then get out for 1-2 hours on the weekend with my sister, and some of the other dogs, I think I will reach our goal by March 31st.  Maybe I’ll even be reporting about some beautiful Spring morning walks then!  As much as Winter is beautiful, there is really nothing like a warm morning when Spring is in the air.  Plus Kobi and I will be able to explore some different routes when the snow is gone.

Today the two beagles, my sister, and I are headed out for a longer trek on a local trail.  I haven’t been out on that one in a while.  Even though I wish the sun was shining today, I am looking forward to it.  It is above freezing out, and the trail meanders by a brook and I know it will be a pretty day.  I hope to get some great photos to share for our final report at the end of March! 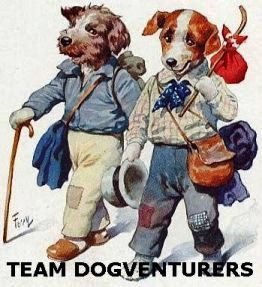 Kudos to my fellow pet bloggers who are also out there on the streets and trails counting their minutes!  You can check out their progress by clicking on the links below.