We are pleased to be co-hosting the 6th WOOF blog hop along with Oz the Terrier.  WOOF (Working Out Our Fears) Support is where reactive dogs and their owners can come together to share similar experiences.  Are you a reactive and/or fearful dog or its owner?   We’d love to hear your story!  This month’s theme is “Hopes and Challenges This Holiday”.  Will the upcoming holidays be a challenging or hopeful time for you and your reactive dog?  Maybe it will be a little bit of both.  We have a giveaway this month, at the end of the post!

In Part 1 I shared how we started clicker training with Luke. Just a few days after we signed him up for private classes, something happened that made us realize just how much we all really needed it.  Let me back up just a bit…..

It’s hard for me to admit this, that Luke is reactive, because of course I partially blame myself (and my hubby). I fear that we didn’t socialize him well enough.  I knew how important socialization was, and we honestly did try.  We had every intention of taking Luke to puppy kindergarten to get him off to a good start.  However, he had only been with us a day before he came down with kennel cough, and not long after that, worms.  Both of these things set back his vaccination schedule (my vet won’t vaccinate an ill dog), and since I prefer to split up our dogs’ vaccines, Luke was 4 months old before all of that was finally done; too old for kindergarten, yet too young for basic obedience.

On one trip to the vets’, he growled at two different dogs. One of the dogs was being calm and friendly, but the other was jumping and pulling at his leash trying to get to us, so I don’t blame him for that one.  In both cases, I just moved Luke away and he was fine.  Next thing we noticed was that he started barking at people coming to our house.  Mostly he only barked initially but then he would settle down and be fine.  I was concerned when he started obedience school, but he did fine there.  On the other hand, he barked at our neighbors when I was walking him.  We thought (hoped) that just getting him out more would help him.

Over the summer our son and grandson came for a visit. We probably screwed up by not introducing them all more slowly, but we were just getting home from a trip ourselves and things were a little chaotic.  What we didn’t expect was that Luke would bark at our grandson the whole time he was there (which was really just a short overnight visit).  So we either had to keep Luke separate or stay right with him to keep an eye on things.  I don’t believe that Luke would ever bite anyone, I know this barking is out of fear, but of course it’s not a chance I would ever take, especially with our grandson.  William, who is 3, was great with Luke….he never tried to approach him, bother him, or anything like that.  Luke wanted to get up to him and smell him, but children move quickly and that always startled Luke and he would back off and start barking again.  For some reason, William still liked Luke….he kept telling his Dad he wanted to see “the black and white dog”! 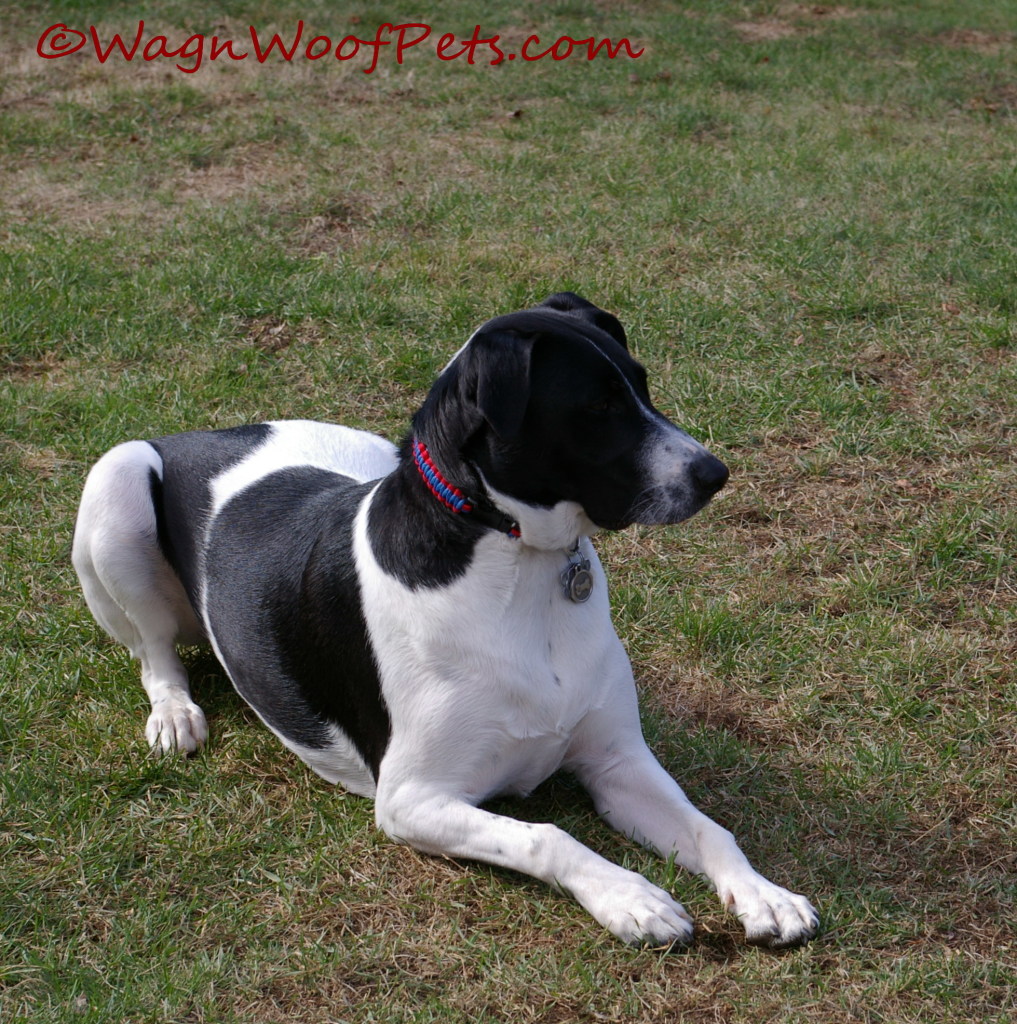 Now we knew additional training was even more important than we thought. When we told the trainer, Dave, what was going on he immediately said Luke was reactive.  To his credit, he didn’t suggest that we had screwed him up or anything.  When we told him Luke had been transported from down south, he told us that often puppies transported can come from inbreeding, and that could possibly cause a sort of disconnect in their brains.  To me, that doesn’t mean Luke isn’t smart, but that his genetics might predispose him to being fearful.  That at least eased my guilt a little.  The bottom line is this is what we’re dealing with, and with the holidays coming, and company, we need to work with Luke to help the situation.  Dave felt that clicker training could be a good tool for this.

I wrote in Part 1 that our first week working with Luke at home didn’t go well. Dave felt that we needed something to get Luke’s attention when he was not cooperating.  He suggested a “leash correction”.  I was wary of leash corrections, but I also knew we had to do something to get Luke to pay attention to us.  From the beginning, Dave assured us he would never ask us to do anything we were uncomfortable with.  We weren’t talking about using any special collars, just giving a tug on his collar so he would focus on us.

To be honest, I was not totally comfortable with the idea, but my hubby was OK with it. I don’t even like to raise my voice with the dogs, and frankly, they sometimes know that and walk all over me.  I thought we should at least try it, and we did.  However, it didn’t take me long to figure out when back at home that it wasn’t working.  For me, it made Luke worse….I could see him kind of “shutting down” and paying even less attention to me.  So I stopped doing it.  When back at our next class, Dave asked about it, and I told him what I thought.

So we stopped using the leash when training (except for loose leash walking of course) right after that and we found that a sharp “Hey!” or clap will usually get Luke’s attention.  Sometimes I have to physically get in front of him to get his attention as well, but it works and Dave approved of how I was doing it.  Then later when my hubby was working on heeling with Luke, and gave Luke a slight leash correction, Dave saw what I had seen.  To his credit, he made a point of telling me that I was right, he saw Luke shut down too.  I felt good that I had observed this, for me it was a confirmation that I was learning and paying attention, and that I know my dog.

Closing thoughts and advice based on our experience.  I’m not an expert – you should always consult a trainer or behaviorist for expert advice!

In Part 3, I will explain how we are using clicker training to help Luke with his fear of strangers coming to our house. 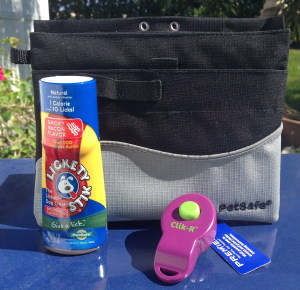 One winner will receive a Training Package that includes a Clicker, Sport Treat Pouch (I have this pouch and love it) & Lickety Stik dog training treat courtesy of PetSafe.  Just fill out the Rafflecopter below.  The giveaway is open for 1 week, it closes on Thursday, November 20 at 11:59 PM – you can come back and tweet daily!  Contest is open to USA and Canada only, age 18 or over, void where prohibited by law.  Good luck!