There is so much discussion in various groups on Facebook and on other websites about how you can identify the sex of your farm birds. It’s been a learning process for us, but after a few years of this, we’ve come to one conclusion: It’s all in the call.

Sure, you can study the size and feather growth of your chickens, or the size of the wattles on your guinea fowl (the funny things on the sides of their heads). We have gotten fairly good at identifying cockerels (young roosters) by watching them as they grow.

But our latest two hatchlings (now several weeks old) fooled me. As seen in a recent post “Farm Surprises“, the rooster’s first crows can be funny sounding! So, we know when it’s a newbie, and not one of our two older roosters. When we recently heard that sound come from the coop, we knew we had a rooster in our latest two (we figured we did anyway, it seems to be pretty much 50/50 when you hatch your own). However, I thought it was “Lemonade” and hubby thought it was “Frankie”.

We had suspected either one, Lemonade has the long legs that some of our last roosters had, but Frankie had more flamboyant feathers, and some seemed pointy which is another sign. Still, I wasn’t sure (or worried both were roosters, which could still be the case, some start crowing much earlier than others!). Usually, they’ll stop crowing by the time you make it out to the coop to try and see but I got lucky one morning. Hubby was right, Frankie is the rooster.

That’s bad and good: he’s a prettier bird, but we probably won’t be able to keep him, since too many roosters can be problematic. I had hoped (and still hope) Lemonade is a hen, because she looks like our White Leghorns and that breed has proven to be our best layers (we had two, but unfortunately lost one to a coyote this summer).

The Same (only opposite) Goes for Guinea Fowl

Now, when it comes to guinea fowl, it’s the females who will stand out by their call, not the males. We see very little difference in the size of our males and females, in the size of their wattles, or in the “bustle”, their back end. The bustle is said to be puffier in the females but some of our males look that way too. Many people say you can identify them from any of those things, but we disagree.

The only way to identify a female guinea, in our opinion (until you catch them laying eggs) is by their two-tone call, heard in the second half of the video below (the first half shows our newest guineas enjoying some freedom in the coop).

Pretty distinct, right? The males have many different vocalizations (mostly loud squawking!), but they cannot do that two tone call! We’ve paid closer attention this year, and we first started hearing this call when the keets were about 4-5 weeks old. We hatched two keets in the spring – Belle is the female, and we bought 8 last month – so far, I’ve been able to see/hear 3 of them making the call! Females are desirable when it comes to guinea fowl too because their eggs are extra nutritious. Plus, we can always sell hatching eggs or keets next year should we decide to hatch our own!

They are also different than chickens in that they are much gentler when it comes to mating (the female will choose just one male), and we can have as many males as we want. They do have some spats in the spring, when mating first starts but they mostly settle down after that.

Of course, we can’t forget our blog star, Farm Dog Luke. He is suffering from his usual late summer allergies. However, I think he’s doing a little better with it this year, we got some hemp chews for him from Only Natural Pet, and between those and Benadryl, we’ve been able to reduce his scratching and licking some. With fall weather approaching, meaning cooler nights, the house will be closed up more too, which always seems to help him. Normally, this only lasts a few weeks for him (it gets much better after our first frost, though we hate to rush that for the garden’s sake!). The cooler weather also means that walks will be easier (the mosquitoes have been brutal this year, along with a very hot/humid spell, so walks have been reduced), and more enjoyable! 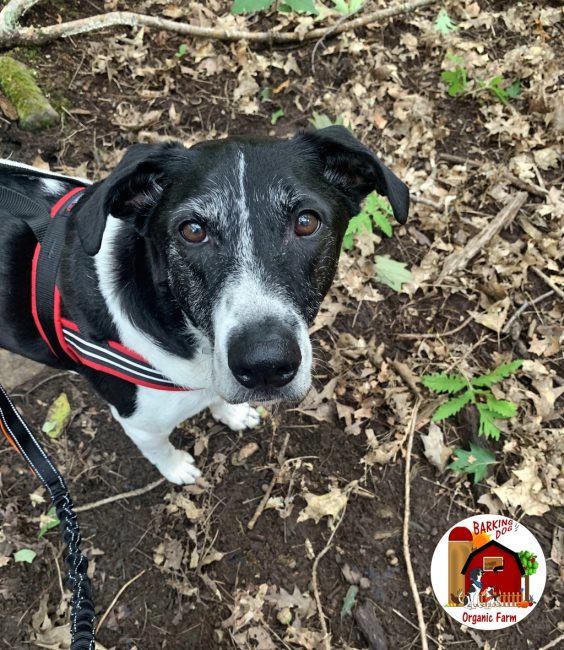 We got him a new leash, the Mighty Paw Dual Handle Bungee leash*, thanks to the recommendation from our friends at My GBGV Life. I love it! The bungee in the leash really makes his pulling much easier on my arms and shoulders. He also just seems to walk better on it, almost like he feels the resistance and doesn’t pull as hard. 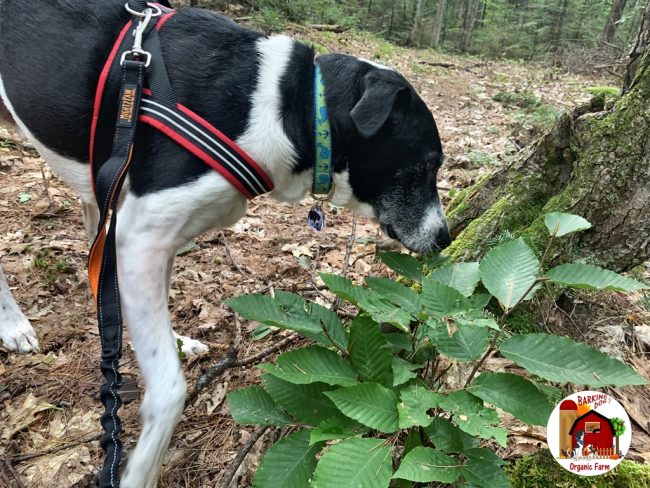 We have other exciting farm news – my hubby is going to semi-retire at the end of this year, which means next year he’ll have a lot more time to devote to the farm! We have lots of plans and ideas and will keep you posted on that! He’s going to take over a lot of stuff that I used to do before I had the shop and no longer had time for it all.

We finally got enough summer weather for my taste, and now I am looking forward to fall. We can see the days getting shorter already. We’re very in tune with that since it affects when the flock will go to bed at night! The summer was mostly good for the birds, though we did lose 1 guinea hen and 2 chickens to a coyote. They’ve been on “lockdown”, as I jokingly call it (it just means no free ranging, they can still be outdoors in their run), off and on for the last few weeks. We thought the coyotes had moved on finally, but just a few nights ago we heard them calling right out in our yard! We’ve never had them that close to the house, so that was a bit freaky. We’ve got some things in the works now to try to keep them away, so keep your fingers crossed for us that it is successful!

Happy end of summer, here’s some other photos from around the farm!!