Now that the busy holidays are behind us (it was a very successful Christmas shopping season at my shop!), and my hubby is officially “semi”-retired (he’s still working at his job two days/week), it’s time to sit back and look at what’s ahead for the farm!

The winter so far has been a bit crazy. All our chickens stopped laying eggs completely, which has never happened to us before! It always slows down once they start their fall molt and the days get shorter, but since we’ve started raising them, we’ve never had to buy eggs at the store! That was not a happy thing, especially since eggs of equal quality to ours (free-range, organic) are not cheap! I think a lot of people don’t realize what a good deal they are getting when they buy our fresh eggs at only $4 or $5/dozen!

Normally we have enough first year girls to pick up the slack of the older girls molting and taking a break, but our 5 newbies just did not step up to the plate!

That went on for several weeks, then finally at the beginning of the new year, some of the girls started up again. We’re not getting a lot, but at least enough to say so! Hopefully as the days get longer, the numbers get higher; but the weather could be a factor too. We’ve got more frigid January weather in the forecast.

That’s the first step of the plan: adding to the flock! We’ll be buying our chicks this year (hatching our own didn’t go as well as we’d hoped). I already have a list going of the different breeds I’d like to get his year, and we’ll also add more of breeds we’ve had before that did better about laying in the winter! Our first group was quite good about that – Rhode Island Reds, Buff Orpingtons, and Golden Comets. Losses from illness and predators have left us with just one RIR and one Buff now. The Golden Comets are especially good layers.

We still have Lemonade the rooster! He and Charlie get along fine, and he has not been overly aggressive with either us or the hens, so he has stayed. Hopefully he continues to do as well this spring when mating season ramps up.

While the guinea fowl aren’t real fans of winter, they get out and about on the warmer days more than the chickens do. They like to go up high and stay out of the snow though. They also get a bit crazy, often squawking and carrying on for no apparent reason. On two different evenings we had one guinea refusing to go into the coop at night. When they’ve made up their minds, there’s no convincing them otherwise (especially since they are usually up on the barn, garage, or in a tree). It’s concerning, especially with some big owls around, and it being so cold, but luckily both times they were fine. Now that it’s even colder, hopefully they won’t play that game anymore! 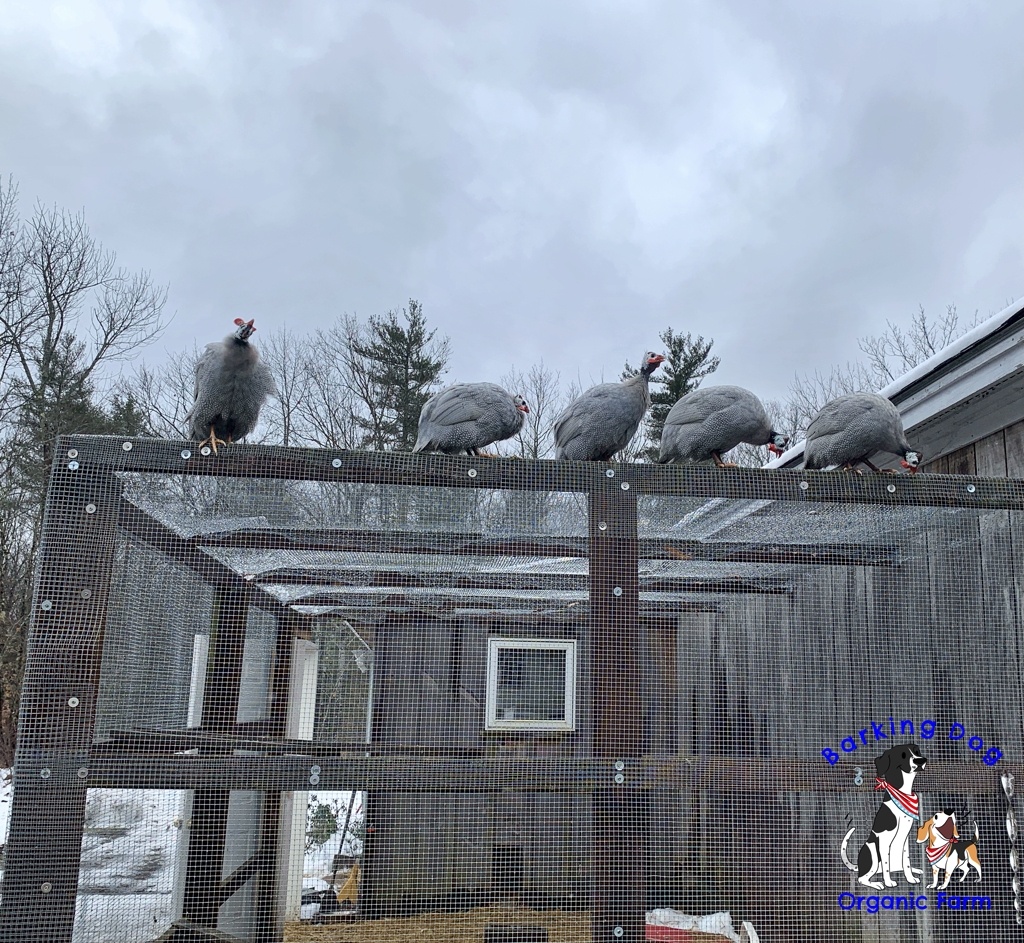 I’m excited by how many female guinea hens we now have. We’re not sure if our oldest one will continue to lay this year or not, she stopped rather early last fall. We’ve got at least 4, possibly 5 now. Guineas lay much more consistently than chickens during their season, so we hope for at least a dozen eggs/week from them, starting in late spring. I like their eggs for eating better than the chicken eggs, plus we will try selling them. I also think we might try hatching some guinea eggs this year, we seemed to have a little better luck with them when we were incubating them exclusively.

Luke is doing well, and we get out for walks whenever we can. Big snowstorms and frigid weather keep us inside at times, but overall, we’ve been getting out pretty regularly for daily walks, even if they are sometimes short. Now that Dad is retired, he can walk him more as well. He’ll have the luxury of being able to wait until it warms up outside, whereas I have to get out early before going to work, and sometimes it’s simply just too cold, or snowing (or raining and icy, we’ve been getting a lot of that this winter too).

I think Luke is thrilled to have Dad home with him more. Now he only has two days per week where we are both gone to work.

Luke really enjoyed Christmas. He is just thrilled with the opening of presents, even if they aren’t his own! The living room looked like a hurricane had hit once he was done! He completely destroyed a nice pillow I had gotten him, along with much of the wrapping, but at least he had fun doing it. One of the other toys is still intact at least!

Hubby will be taking over most of the seed-starting and other garden chores this year. We have high hopes that the vegetable garden will be easier to take care of with the “raised row” method we are trying this year. Between the new method and him being home to tend to it more often, maybe the weeds won’t completely take over again this year.

We are still eating potatoes from last year’s garden though, so that’s pretty exciting! That was our one crop, along with peas, that did exceptionally well this last year.

The planning is one of the most fun parts of gardening, so soon we’ll be going through seeds to see what we have left from last year and deciding which things we’ll plant again. I want to try some winter squash for the first time too. Since I’ve been on a special diet for my migraines, I’ve learned a lot about the nutritional value of winter squashes (many are high in potassium), and I’m learning which varieties are best and are tasty too. My brother-in-law brought buttercup squash to Thanksgiving, and I loved it, so that’s going on the list.

I never intended to neglect this blog, I just got too busy with my shop for the holidays and had no time for writing or taking photos. I do plan to keep it going, though my posting may be intermittent, I have a lot of plans and projects for the shop and that is my priority at this time, along with our health which means I need a lot of time for walking too.  I’ll do my best to keep you all up-to-date with any farm news, and photos of our adorable boy Luke too!