It took me a while to get this video, because whenever I got close with the camera, this Araucana chicken would refuse to crow, as you can see in the later part of the video. Starting far away was the only way to get it, and I included some of the other clips, just so you could see what a beauty he is!

We talked about it from time to time, but we never planned to have a rooster. We’ve gotten all our chickens so far from a local feed store, and they are always supposed to be hens. However, they specifically do not guarantee the sexing of the chicks (I don’t know how they do the quantity they do of day-old chicks anyway!), but out of 32 birds we’ve bought from them, this is the first time we accidentally ended up with a rooster.

There are pros and cons to having a rooster, which I’ll get to in a bit. First, a little bit of the story. I had started to get suspicious of this bird a few weeks ago. She seemed so much bigger than most of the others, and she’s always picking on everyone else, like she wants to be the boss. However, they are at the age where they are establishing their “pecking order” anyway, so I didn’t think too much of it. I started to research how to tell the difference between a pullet (young hen) and a cockerel (young rooster), but most places said they won’t start crowing or showing other differences until at least 16 weeks of age. This crew is 10 weeks old now. The red of his comb is a clue as well. If you look at some of the young hens in the video or photo as well, you’d see that theirs are pale. On hens, the comb typically doesn’t turn red until they are close to laying age, which is quite a few weeks away for this group (at least 6 or more).

Hubby and I were sitting on the deck on a warm evening a couple weeks ago when we first heard what sounded like a rooster crowing! We looked at each other and laughed, and then we heard it again! Since we were not near the coop, we really had no way of knowing who had done it, though I felt like I knew!

As the days went on, we were hearing it more and more, and then we saw her/him in action. I’d been wanting to pick a name for this one because his coloring is distinct anyway, so while we still felt unsure, I started calling him Caitlyn. I had also read in my research that on occasion, hens do crow, but I’ve since found out that it’s not a true crow, but more like a half crow. You heard it, I’m pretty sure that’s a full-on crow!

The Pros and Cons of Having a Rooster

The main reason we never got a rooster is because roosters can often be aggressive and mean, to everyone, including humans. We see roosters being given away all the time in the Facebook groups we are in for chicken keeping. They also can be rough on the hens during mating, from what I understand. But I also read that as long as you have plenty of hens for them to mate with, that may not be an issue either.

Now, we have one less possible egg layer, and if you’ve been reading our posts, you know how that’s been going lately! We need all the egg layers we can get to keep up with sales!

Another con for some people could be the crowing. Those that live in more urban areas have neighbors to worry about, or maybe you’re a light sleeper like me and don’t want that early morning awakening. We have no close neighbors, and our coop is far enough away from the house that we don’t hear them from our bedroom. The first morning I was walking Luke on our trails and we heard him crowing, I smiled. That crow really made me feel even more that I live on a farm!

So, the crowing for me is a pro! The other pros are that the rooster will keep the flock closer together and protect them. While we have the guinea hens for protection and alerts, I feel like you can never have too much.  On the other hand, how the male guineas will get along with a rooster also remains to be seen. It may keep the guineas from picking on the chickens, as the rooster might protect them, but I wouldn’t want things to get ugly.

A rooster means we will have fertilized eggs and we should no longer have to buy new chicks in the spring, which would save some money. Plus, we can let the ladies hatch and raise them, so no cage inside the house! Mama will keep them warm and safe. A lot of our hens have been what they call “broody” lately; meaning they want to sit on eggs. Our older girls especially have been spending time sitting in the nesting boxes with nothing to hatch. They stop laying eggs when they’re doing that, which could be another reason for our recent egg shortage. It can especially be a good job for the older hens who are laying less anyway, and want something to do. Once they get that out of their system, they would go back to laying!

All things considered, we’re open to having a rooster now, and we’re willing to give it a try! We also kind of feel like maybe this happened for a reason, and it could end up being a good thing. We will try to spend as much time with him as we can, to hopefully gain his trust and make him more friendly to us (right now he seems a bit afraid of us). After all, ever since getting our birds, it’s been a learning curve so this will be yet another. I hope not to become one of the many on Facebook looking to re-home any of our birds for any reason, and we like to commit to things and do not give up easily.

We’re actually kind of excited about seeing where this goes now, and I still smile every time I hear him crow. Now we must give him a male name, because I don’t think there’s any doubt at this point that we’re on another new farm adventure. We’ll be sure to keep you posted on how it goes! 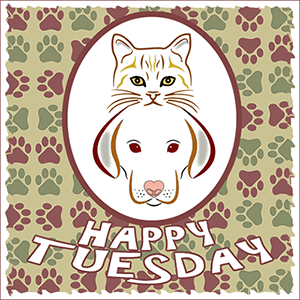 We are pleased to be joining our friends at Comedy Plus for the Happy Tuesday blog hop! Please visit them and other blogs through the links below.