In spite of the 30-40 mph Northwest winds today, I think it’s safe to say that spring has sprung here in New England.  My crocuses are popping up and the buds are showing on some of the trees and bushes.  Who can’t be happy about this after the bitter cold and snowy winter we had?  Yet there are still some unhappy thoughts that spring brings to mind now….my sister emailed me the other day to let me know she had found a tick on her beagle.  They’re baaaaaack, and that’s a true horror show!  We have yet to see one here in our town, but I know we will soon enough.  I can’t even begin to tell you how much I hate ticks.

Last year we had a lot of ticks and they said it was because we had a mild winter.  This year they are saying we’re going to have a lot of ticks, because the deep snow cover would help them survive.  We can’t win, right?

I mentioned last month that I was already thinking about how we’re going to fight the bugs this year.  I try to do things all naturally wherever possible, and last year we stopped using chemicals like Frontline on the dogs.  I don’t like using pesticides on the dogs, just as I don’t use insect repellents with DEET on myself.  We checked diligently for ticks daily, but what we didn’t see coming was the flea problem we had in the fall.  We had never had an issue with fleas, and even when we used Frontline we only used it for a month or two in the spring.  We don’t see as many ticks once we get into summer and I didn’t want to use it if it was unnecessary.

The month of April has been designated National Prevention of Lyme Disease in Dogs Month by the American Lyme Disease Foundation.  As you can see from the map below, we live in an area with a high incidence of Lyme disease.  This disease was first found in humans in 1975 in the town of Lyme, Connecticut, where it got its name.  It is an infectious disease that is transmitted by deer ticks.  It was first found in dogs in 1984.  I’ve known at least two people and two dogs in my area who have contracted Lyme disease (or at least tested positive for it).  What a lot of people may not know is that it is a far more difficult disease in humans than in dogs.   Dogs can test positive for Lyme but never develop the disease, only 5% of dogs exposed to the disease will actually come down with it. 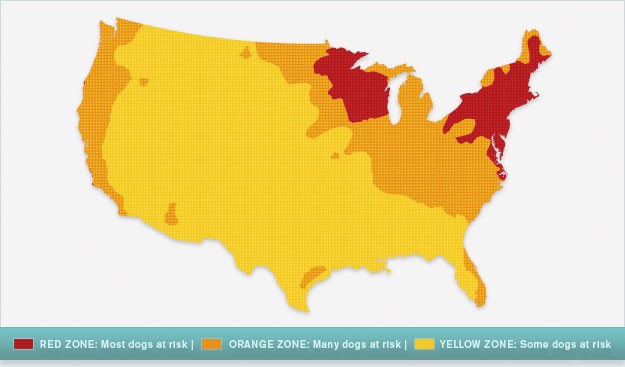 Dogs respond very well to antibiotic treatment and the majority of them recover completely.  Some can even recover without treatment.  Dogs don’t contract the systemic disease that humans do which in humans can lead to a lifetime of complications.  Even so, Lyme is a concern in dogs because you still don’t want your dog to be sick.  The clinical signs of Lyme include lameness, limping, and fever.  No one wants to see their dog go through that.

Ticks can also carry other diseases:  Ehrlichia – another bacterial infection that has similar symptoms to Lyme and affects the white blood cells; and Rocky Mt. Spotted Fever – which when caught early can have a good prognosis, but if not can have long term consequences or even death.  Since humans are also susceptible to all of these diseases, it is also important to keep our dogs free of ticks which can transfer onto us.  Trust me, there is nothing worse than waking up in the night feeling a tick crawling in your hair that very likely came in on one of the dogs.

Some of these diseases are far less common, and you can see from the maps below if they are more common in your area. 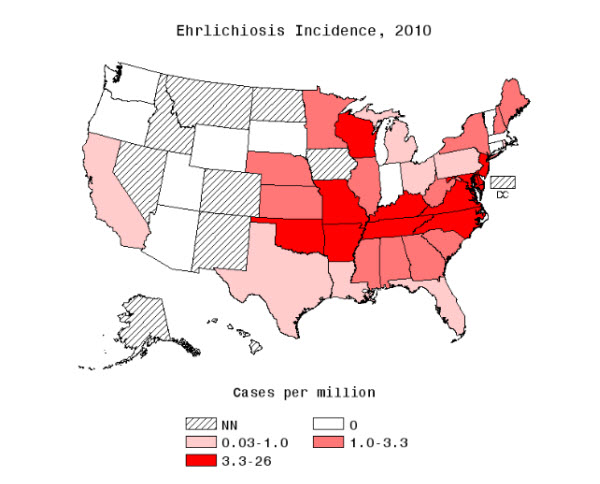 After our battle with fleas last year, I knew we had to do better this year for the dogs. It doesn’t do any good to be all natural if they are still suffering.  Both Sheba and Cricket had issues with itching and losing fur.  At first we didn’t know what was going on, until I saw the first flea on them.  Surprisingly, Kobi never had  a problem, and neither did the cats.  We were able to get it under control using mostly apple cider vinegar, baths, and a thorough cleaning of all dog beds in the house.  This year I want to get ahead of it, preventing it instead of having to treat it.  I spent a lot of time this winter researching what to do.

Please come back for Part 2 where I lay out our plan of action.  There’s a lot more to it then you might think (much to my hubby’s dismay!). 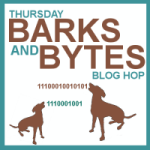 We are joining 2 Brown Dawgs Blog and Heart Like a Dog for their Thursday Barks and Bytes blog hop (with a little play on the word bytes, as in “bug bytes” – ha ha).  Please visit them and others through the links below!