Last week wasn’t the greatest week around here. I’ve been worried about Cricket, and then we had a scary episode with Sheba as well. Let me say first that everyone is mostly fine right now!

Cricket had been slowing down since just before her birthday, we figured she was having an arthritis flare-up. She’d been off her pain meds for the summer and had been doing great. I can’t say that it’s a surprise that at 12 years old she’d have a bad spell though. 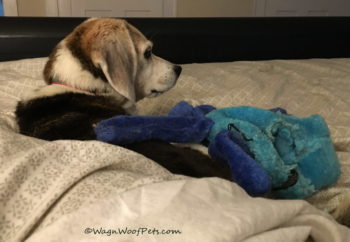 However, she made me worry more last Monday. When I got home from work, she didn’t even bark. Cricket always barks – she and Luke go into a barking craze, and even Sheba joins in at times. We had been limiting her ball playing time, or she’d even limit it herself. But on that day she didn’t even show interest in her ball, and just wanted to go back in the house to lie down. For our ball obsessed beagle, that is very worrisome.

She was a little better later, she did bark when Dadz got home. She’s been acting pretty normal otherwise – no changes in appetite or bodily functions, and she’s still been seen carrying toys around and joining in the barking when the delivery trucks show up. She’s even half-heartedly brought me the ball a few times, or at least carried it around. She’s also been overly obsessed with the new gate we put up off the bedroom, and is quite determined to get through it to find Sam’s food. But she won’t even try to jump up on the furniture and still shows far less than normal interest in her ball. I’ve seen her back legs go out from under her a couple of times too.

We put her back on her Rimadyl the day before her birthday. I stopped at the vet’s office on my way home from work Wednesday and talked to the techs for a bit. At the least, Cricket will need a blood test because of going back on the meds, but we might have her see the doctor too just to be sure nothing else is going on. The lack of interest in her ball concerns me, along with the fact that we’re not seeing much improvement on the Rimadyl (but I didn’t rest her completely initially which I probably should have). The vet’s office did say they’ve seen some arthritis flare-ups now that the weather has cooled off, so that’s at least reassuring.

Hubby and I discussed it later and decided that if she didn’t show improvement by the end of the weekend, she would see the vet. I took her for a walk Saturday morning and she did well. She picked up her ball later and on Sunday. I don’t know which is worse – her not wanting to play or having to say no when she does want to!

At that same time, I discussed Sheba’s situation with the techs as well. Sheba has still been on the antibiotic she was originally put on for her UTI; and I wondered if it was safe to keep her on it, we had just run out. Since she has been doing so well we didn’t want to change anything, and they agreed and refilled her prescription.

That evening as we were sitting waiting for supper to finish cooking, Sheba came into the room walking oddly, and then she fell down. We weren’t sure if she had just slipped but as Dad helped her up we knew something was not right. He took her outside and sat with her. She could not walk right, her head was listing to one side and she was drooling some. Her eyes didn’t look right.

We thought sure she was having a stroke, and that we were looking at the end of her fight with cancer. I was trying not to sob as I called the vet while Dadz stayed with her. Even though it was after hours, luckily one of the doctors was still at the office, so they told us to bring her right down. While I was on the phone, her supper came back up.

By the time we were getting the other dogs settled and getting ready to load her in the car, she seemed better, though she still wasn’t walking quite right. We decided we would still take her so they could have a look at her. As we took her into the vet’s office, we felt foolish, because she was FINE. A slight hitch in her back leg was all that was left of the episode.

The doctor did a neurological exam and the conclusion was that she had had a seizure, not a stroke. As the exam was over, our silly girl ran around the vet’s office like a puppy (headed for the door of course)! We had forgotten her leash because we thought we’d be carrying her in, but no one else was there so it didn’t matter. She has been completely back to normal since (she didn’t even show any after effects that evening!), but the concerning thing is that this seizure may mean that the cancer has metastasized to her brain. We won’t know, and we’ll be watching her closely and continuing to take it one day at a time.

I learned something that evening that maybe I needed to know. If Sheba was going to be suffering in any way, and unable to enjoy all she has been enjoying lately; I was ready to let her go, as much as it broke my heart. We never had to make that decision for the last four dogs we lost, so before this I had my doubts that I could make it. Of course I was also extremely relieved we weren’t there yet.

As we sat down to our lukewarm dinner at about 9:00 that evening, we saw this behind us:

I know that we’re not out of the woods with either of our senior girls, but at least for that moment I could breathe a sigh of relief as I took in the peaceful scene.