On Monday I shared the crazy week we had last week getting our new deck and fenced in yard. This week we are having a quiet week with a break from construction and other than fighting off the bugs, the crew has really been enjoying the new yard! We’ve been sharing some photos but today we want to give you the full tour with views from all angles.

I tried to make a video but between swatting at bugs and having Cricket yelling at me to throw the ball, it didn’t come out too well. So I put some pictures together and we will have a short video at the end where Luke shows you that even though the fenced in area of this yard is smaller than the one at the old house, there is still plenty of room to run. Plus there is plenty of yard and land beyond this that will be explored on leashes! 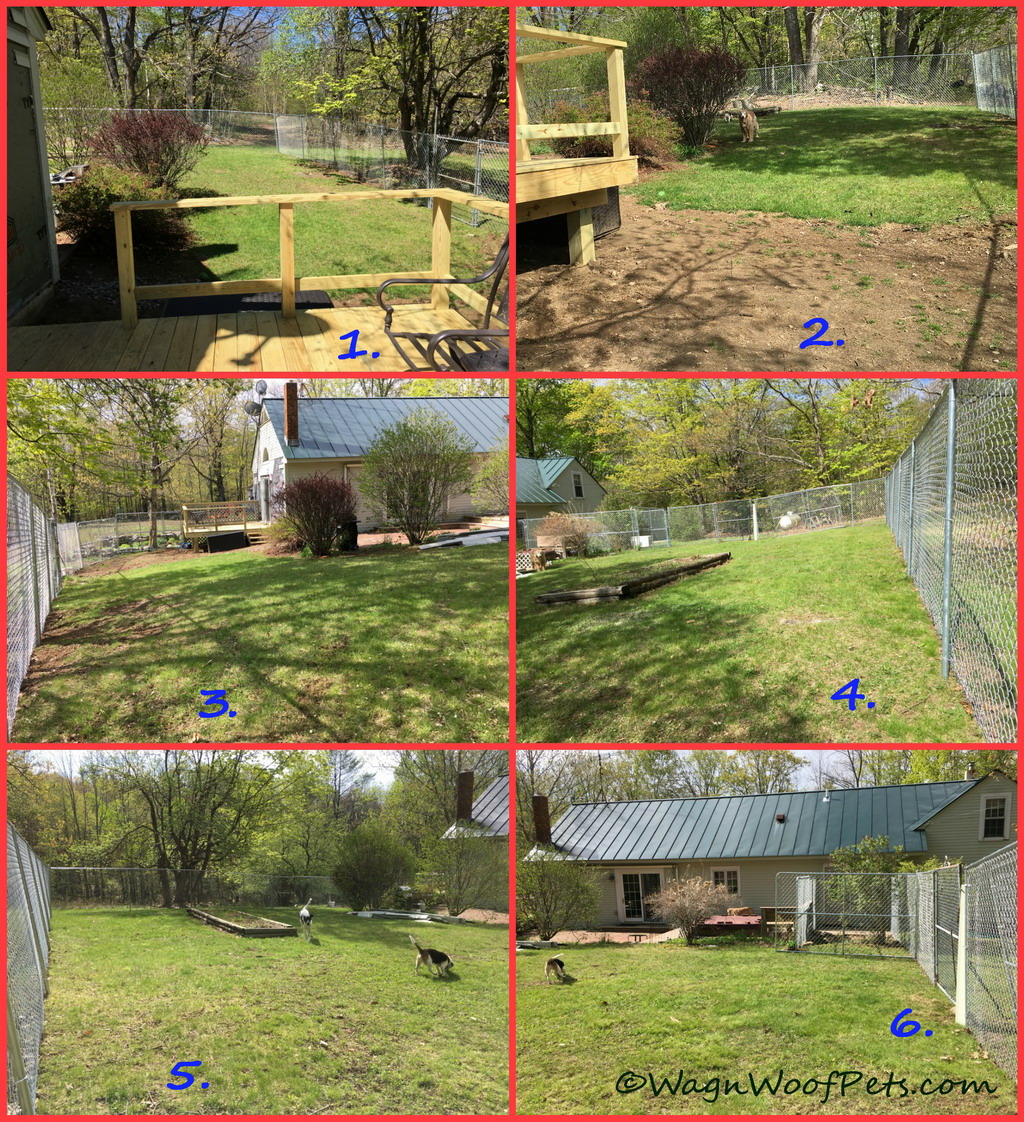 There is another door to the house there (to the left of Luke in the first photo), and it may seem odd that it goes into the master bathroom. But you can see a hot tub there also, which makes it all make sense. The hot tub needs some repairs and we haven’t decided yet if we’re going to repair it or just get rid of it. We had a hot tub at our old house for a while, but eventually gave it away because we just didn’t use it a lot.

So what we did there was to fence off a smaller area (about 8′ x 10′) off of that bathroom for taking the dogs out at night. Cricket and Luke both get up in the night sometimes and need to go out. At the old house we used to have to go all the way downstairs and let them out into the big yard. Cricket would screw around out there (following her nose as beagles will do!) and we’d have to keep yelling at her to come back in. I didn’t like that I couldn’t see what they were doing. I thought if we had a small area like this, they wouldn’t be able to do much other than go out and go pee! And if anyone wasn’t feeling well, I could watch them to see what was going on.

You can also see that this area looks right onto the patio. If we have company, this will give Luke an area where he can be outside but separated from people that he might not be comfortable with. Kind of like a big crate (that he’s not afraid of!)….safe for everyone and more comfortable for him, so he doesn’t have to be alone in the house shut in a room. I want him to be able to see people and get used to them from a safe area. Plus if we’re having a picnic and eating I don’t have to worry about the girls cruising around begging from people or trying to steal food off tables (yes, they would do that and trust me, they’d get a lot of food they didn’t need – my family can’t resist those sweet faces!).

This will also be convenient when our construction continues. They’ll be working in the deck area, and instead of interrupting my work when I’m working at home to take them outside on leashes, I can just let them into that small area.

We bought some used fencing cheaply and we still have some of that left. So if we decide this isn’t big enough for the dogs, we can still expand. I think they’re pretty happy though, as demonstrated in the video below!

Did you see it? At about :35 where Luke leaped right over Cricket? Yep, that’s how he rolls! We may need to invest in more agility equipment for play purposes!