When looking for an old post yesterday, I ran across one of my very first blog posts, that has always been one of my favorite stories.  Growing up, I was always a cat person and this story is about how I came to fall in love with dogs as well.  I’ve been feeling sentimental lately, must be the holidays, and I really wanted to share this story again.  Since it was early in my blogging, I’m pretty sure only family and friends ever saw it (and they left some very nice comments).  I did tweak a couple of grammatical errors in it, and add one photo collage, but otherwise it is the same as when originally written.

People who visit our zoo…er, home, and meet our 4 dogs, would be taken aback to learn that I didn’t always really like dogs. Only the people closest to me know that.

We never had dogs growing up….as a child in Massachusetts, my family only had a couple cats that came and didn’t stay, I don’t remember why.  I also had a rather mean parakeet named Perky who would bite anyone who dared to try to take him out of his cage. (Of course, we still loved him in spite of that.) Later as a teenager in New Hampshire two stray cats found their way into our yard and our cajoling finally wore my father down, and he let us keep them. I had many cats after that, but no dogs.

My baby book has an entry from my mother under “favorite toys” that reads “stuffed animals, especially dogs”. Perhaps that was foreshadowing on my mother’s part. I did indeed have a stuffed dog named Lucy that was with me until I was well into my 20’s. She was limp and dirty by then, and eventually I must have lost her or decided it was time to let her go.

I can’t point to any specific reason why I didn’t really like dogs, or was even a little afraid of them. I would visit other houses where people had dogs and maybe their dogs jumped on me or otherwise misbehaved. One friend had a little Pekingese who barked at me a lot when I visited. He may have been trying to tell me something. But I didn’t hear it.

When I met my husband after moving back to Massachusetts, he didn’t currently have a dog, but he had had several dogs throughout his life and he definitely wanted another. I put him off for a bit, though we did agree that we would get a dog when we owned our own home.

We moved back to NH in the early 90’s, when the late 80’s real estate high had busted, and we were unable to buy a home immediately. We decided to rent a house, if we could, and found a nice one out in the country. The landlords lived right next door and we went for our interview to their home. They had two Labrador Retrievers….a black Lab named Mariah and her son , a big chocolate Lab named Moses (they later got a 3rd, a yellow Lab named Molly). As we sat on their couch talking, those dogs were all over me….on the furniture clambering for my attention. As uncomfortable with that as I might have been, I politely patted the dogs. We rented the house, and since we were pretty far out in the country their dogs sometimes ran loose and came down to visit us, especially Moses. We took long walks on those country roads with him accompanying us. That soon got to be a routine, and he would play with rocks in the brook and just generally entertain us and keep us company. I fell in love with that dog.

We eventually moved to another rental home, and then finally were able to build our own. The promise of getting our own dog was still there, but now I was more enthusiastic about the idea. After settling into our new home for a few months, we saw a commercial on TV for the local humane society where there were puppies available. We went to see them, there were only 2 puppies left by then, and we chose what we thought was the quieter of the two. On our way home with her we named her Shelby. She turned out to not be that quiet after all, but that was OK. She was a good girl and stuck to the rules of the house that prohibited her from being on the furniture. 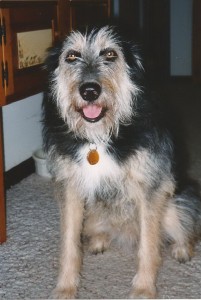 We took her hiking and camping and she enjoyed all of that very much. Shelby was not a beautiful dog.…I often joked that she had a “face that only a mother could love”. However, she was cute and loveable, and she had a beautiful soul.

When she was only 6 years old we found a lump in her chest. The diagnosis was an aggressive form of lymphoma. There were treatments available and we chose one which we felt would not be too difficult for her. She quickly got better, and her remission lasted about 3 months. But it was a good 3 months, through that time we still took her hiking, and she felt great. We treasured that time by spoiling her and giving her free run of the house, furniture and all. Her death was rather sudden and happened on a sad rainy day when we were not home. I will always feel guilty that we weren’t there for her, but I think in her own way she knew it was time to go and it would be easier for us if we did not have to make that agonizing decision ourselves. 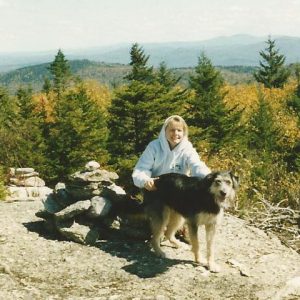 I believe that all of our animals leave their mark on our heart, and their own legacy. Shelby’s legacy was that once she was diagnosed with cancer, all the silly household rules went out the window, and she had that free run of the house, which paved the way for every dog we’ve had since. They are all allowed on the furniture, and appropriately spoiled in every other way.

Sometimes it may not even be our own pet that leaves that mark. When we brought home our current male golden retriever, we named him Moses; in honor of a sweet loving chocolate Lab who left his legacy by literally changing my life. I now cannot imagine being without dogs and their unconditional love. 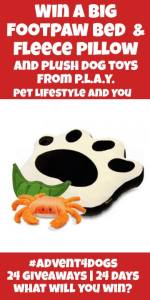