Cricket didn’t tell the whole story on Wednesday (you can read that post here)!  My hubby and I don’t go on a lot of vacations.  Neither of us is big on traveling, and we really don’t like leaving the pets and our home very often.  Our most recent trip was our second of this year, but that is unusual and only because we had a family vacation back in July, and it was our 25th anniversary this year.  As much as we hate leaving, sometimes it is just nice to get away from it all for a bit.  When I’m home I feel like I always should be doing something, and when I do actually let myself relax, I feel guilty because there are things to be done.

So taking a break doesn’t seem so bad, and it’s the only way I probably ever do really relax.  Even then, I have to work at it!  Besides, the pets don’t make it easy to leave; this time they each had their issues in the days before we headed out.  Here’s what we dealt with from each dog before leaving:

Cricket:  We started vacation from work on Saturday, and then on Sunday we went to the Nascar race in Loudon, which we go to every September.  We were gone most of the day, so Monday was our day to get everything ready for leaving on our trip Tuesday morning.  Lately Cricket had been scratching a lot and I actually found a flea on her a couple weeks ago.  It was only one, and I haven’t seen any since….and I’ve been checking daily.  I don’t like to put strong chemicals on the dogs unless I absolutely have to.  I had been brushing both her and Sheba through with an apple cider vinegar/water mix which is supposed to help repel fleas.  Yet still she scratched.  I already had a mile long list of things to do on Monday, but I added to it:  give Cricket a bath.  That was fine, we found the time to do it, and she was very good about it.  Yet she was still scratching Tuesday morning before we left! 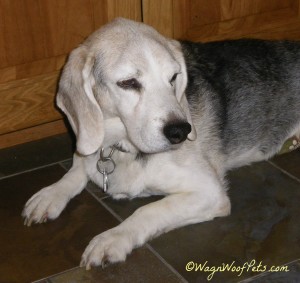 Kobi:  On Monday morning, Kobi didn’t want to eat his breakfast.  Kobi is a beagle, so that is significant….it is not often he refuses a meal.  So the worry began.  He finally ate late that morning, and he had seemed fine otherwise and ate all his usual treats.  By evening I felt OK about that, and on Tuesday morning he got up and ate his breakfast as usual.  Then, as we were packing and getting ready to leave, he threw up.  Three times.  Ugh.  I tried to reassure myself that from time to time Kobi does get an upset stomach, and it’s been a while since he has, so I should not worry too much.  At least he did eat his usual treats that we gave them when leaving, that made me relax just a bit.

Sheba:  Sheba is a paw licker, she always has been.  We try to deter her from it, and never before has it caused any kind of issue.  Until recently when I discovered a bald pink spot on her right leg which I believe she caused from the licking.  We have been keeping an eye on it and I clean it daily and watch to be sure it doesn’t become infected.  It finally looked like it was scabbing over.  That was until Tuesday morning when I caught her furiously biting at it, until she drew blood!  I cleaned it up once again, as  I wondered if she was just anxious because she knew we were leaving.

Now before leaving town I had to send my sister, who would be pet sitting, an email telling her everything that was going on.   Of course, none of these were serious issues, though worrisome, and we still left as planned.  However, I am a professional worrier and of course had a sick feeling in the pit of my stomach for the whole three plus hour drive to the cabin we were staying at.  I had asked my sister to email me later in the day to let me know how everyone was doing (she was working and wouldn’t be going over until evening).  There was no cell phone service where we were, though there is Wi-Fi on the property, which only worked intermittently in our cabin (that was actually better than expected; it wasn’t supposed to work at all in our cabin).  E-mail was the easiest way to communicate, though of course in case of emergency, she could reach us through the main office phone.

I was somewhat able to get my mind off things and not worry too much, as we relaxed at our cabin that first evening.  However, I was relieved when the email came from my sister.  All was good!  Kobi had eaten and kept down his dinner, and no one was scratching or biting at anything!  My sister checked in from time to time over our next two nights there, and everything stayed good.  That made the drive home much more relaxing for me….I didn’t have to anxiously worry about how everyone would be when we got home!

On a lighter note, I want to share one funny thing from my sister’s first email.  She wrote:  “They are all pooped out right now-‘cept poor old Conrad, he just wanders around and looks mad, huh??  Kinda funny, but not really, I know!”  That did make me laugh….our poor old cat Conrad….I reassured my sister that was normal behavior for him; we don’t call him the “cranky old man” for nothing!  He surely does wander around and look mad a lot.  He’s only mad because he wants to be eating all the time, and we actually make him take breaks from that!

Of course, everyone was great when we got home, and I’m happy to be able to say that I worried for nothing.  Even if anything had happened, the dogs were in good hands with my sister.  But of course, I still wanted to be there for them.  Oh, and I want to thank the two cats for not having any issues before we left!

Do your pets often have issues right as you’re planning to leave on a trip?  I wonder if they are just anxious, somehow knowing that we’re leaving, or if it’s just a coincidence that these things happen at a bad time? 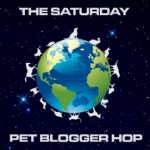 Thank you to our blog hop hosts:  Life With Dogs, Two Little Cavaliers, and Confessions of the Plume.  Please visit their blogs and others through the links below.