We picked up our chicks from our local feed and supply store on Friday afternoon. They packed them up in a little box and we listened to them chirping all the way home; with one especially loud one drowning out the others! 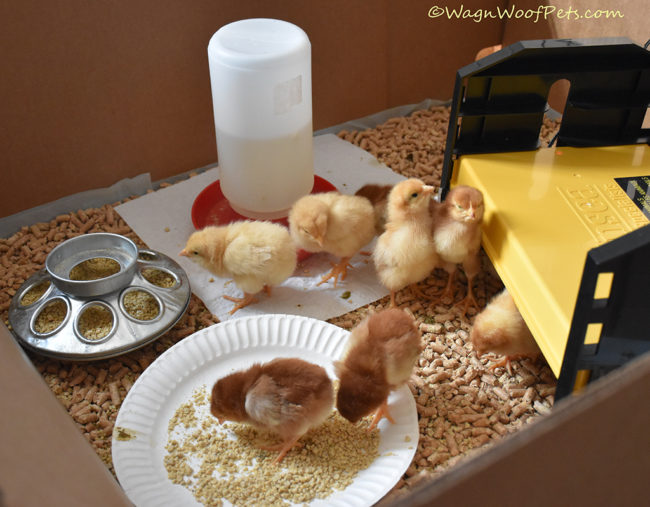 We got them settled into their new pen with food and water, and all went pretty well. We did reduce the size of the pen initially by adding a cardboard barrier, so they could find everything more easily.

By Saturday afternoon we were able to remove that barrier and give them some more space. They scratched at their food for the first night on a paper plate, but that day they also found their feeder with no problem so we could remove the plate.

I have to tell you, there is a lot of information out there about raising chicks and everyone thinks their way of doing it is right. It can be a little confusing, so like with all of our other pets we just have to make the best decisions we can and hope it all works out! One thing I knew was good advice was getting that Brinsea Ecoglo brooder/heater (*affiliate link). The only other way to keep them warm is with a heat lamp. I only had to read once about the fire danger of heat lamps to know we wouldn’t use one. With the chicks in the house with the rest of the crew to start with, and us gone to work at times, I could never take the chance of a fire starting. The heater was a worthwhile investment, and they really do like huddling under it! It works by radiant heat, so is not a fire risk, and does not use a lot of electricity.

We are having fun with them. They were pretty quiet at first, but by Sunday they were really moving around a lot more. They flapped their little wings and got up on top of the brooder/heater much sooner than we thought they would! It’s fun to watch them darting around, and following each other. We put some weeds in there for them, and one of them picked up a piece and started running with it, it was too funny! 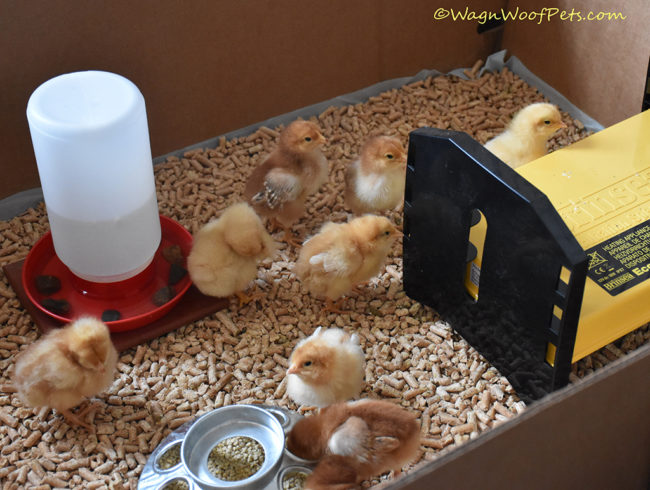 They’re still a bit skittish of us, but getting a little better all the time, and we’ll start handling them more and more as they settle in. We were told the more we handle them, the friendlier they will be. When I reach in with an old spoon to clean up, they will often dart right at it and peck at it. 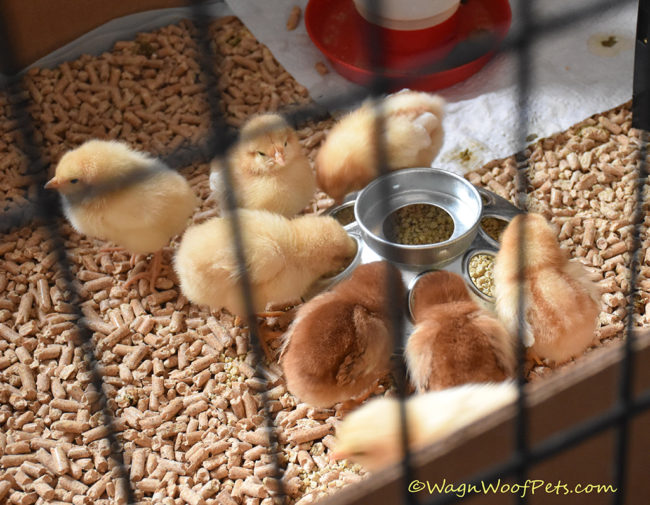 There are a dozen altogether, 4 each of three different breeds. The brown ones are Rhode Island Reds, the plain yellow ones are Buff Orpingtons, and the gold ones with the brown stripes on their backs are Golden Comets. We chose our breeds to get the most prolific egg layers, but also for good temperament and cold tolerance so they’ll do well in the winter. It’s all new to us, so we’ll see if these breeds work out for us!

They are upstairs in our spare room, and our cat Samantha has followed us up there. As you know, she is mostly blind, so she cannot see them. We thought she would at least react to hearing them, but she didn’t. The funny thing was that she was wandering around the room purring and you could see the chicks listening to her, trying to figure out what that new noise was!

When we left, we thought she would follow us but she stayed up there and settled in. I wonder if she fancies herself a mother hen? Cats can be predators to chicks, but I don’t think Sam will bother them. They are safely inside the dog crate anyway, so we’re not worried, and I think it’s kind of sweet that she’s hanging out with them!

These girls are going to grow quickly, so we’ll keep you updated on their progress!