Imagine finally sleeping soundly one night in the middle of what has been a very rough week. You’ve recently lost your job, your family has suffered an unexpected loss, and your routines have all been thrown off as you’ve dealt with all of this. Sleep has not come easy.

Then you’re awoken by something troubling; the bed seems to be shaking. Is it an earthquake? Then you realize your dog is lying next to you shaking uncontrollably. You try to wake up, struggling to figure out what has him so afraid. But there doesn’t seem to be anything. You start to panic, thinking he must be ill. “Now what? Oh God, please, not now, I can’t take one more thing!”

You wake your hubby, and you both get up to take the dog outside to see how he acts. He’s reluctant to go, and when out in the yard, seems OK after a couple minutes. Both dogs do their business and come back in the house. But he’s still shaking.

As you call him up onto the bed with you and try to console him, you then hear it…..the faintest beep off in the distance. Any idea what this might be? Yup, it’s the smoke detector upstairs, letting you know, oh so conveniently, that the battery is low.

When you’re done cursing your husband, because he was supposed to change that battery when the same thing happened with the one in another part of the house, just a few days ago, you send him to take the “*-#$@*&” thing down.

Yes, that’s exactly what happened to us recently. It still took me a few minutes to calm Luke down even after the beeping had stopped. Is it just us, or are smoke detectors the bane of every dog – and their family’s – existence?

When we lived in our previous home, all our smoke detectors were hard-wired in to the electrical system, yet they still had battery backups, so we still dealt with this. Our late beagle Kobi was not afraid of anything in the world, except for that beep and a voice that incessantly repeated “fire, fire, fire”. One of our detectors was stupidly close to our oven, and the heat that came out of it set it off every single time the oven was opened. Kobi even came to be afraid when the exhaust fan was turned on over the cook top, because sometimes that meant smoke that would ultimately set it off. Even just turning on the oven sent him cowering into the corner! It took us a long time, and a lot of waving at the smoke detector every time we used the oven, to finally get him over that.

One day I came home from work and Kobi had peed and pooped in our bedroom. That is not like him at all, and I couldn’t figure out why, until that low battery beep resounded in my ears. How long had the poor guy been putting up with that while I was gone?

When we moved to our new home, they didn’t even have smoke detectors in here! Of course, we got some, and the one near the kitchen was nowhere near the oven or stove (you can see that in the photo above). Yet it still went off constantly when I was cooking (I won’t tell you I’m an awesome cook, but I’m not that bad), even when all I did was open the oven! Seeing cowering dogs running anywhere they could to get away from it is heartbreaking.

That finally had me doing research and I found out that there was a certain type of smoke detector you could get that is not so sensitive to heat, more to smoke. We got one of these photoelectric combination smoke/carbon monoxide detectors* for outside the kitchen. While I can’t tell you I never set it off anymore, I do still occasionally burn something, but it’s been much better. 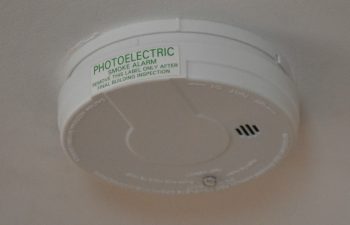 Now to remember to keep those batteries changed. But why is it that the sounds smoke detectors make strike fear into the heart of even the bravest dogs? Is it the pitch of it? Now Luke is a fearful dog, and pretty much any new or different noise is going to bother him. But Cricket is not like that, and she still hates it anyway. Do the manufacturers think that it’s only an obnoxious, ear-piercing noise that’s going to wake us up when our house is on fire?

Now, that might be true for my hubby, who can sleep through pretty much anything, but I’m a light sleeper and it doesn’t take much to wake me up. How about some pleasant music or something? Or if that wouldn’t wake us well enough, how about some head-banging rock-n-roll song? Anything but that obnoxious beeping that stresses my dogs out to the max (and probably cats too, though I’ve never seen Sam react to it).

Dogs like Luke might react to anything that’s out of the ordinary. He freaks out when the power goes out, because he somehow knows it’s not normal for the house to go completely dark for no reason. At our old house, a power outage would set those darn smoke detectors to beeping again (every single time), but luckily it’s only the hardwired ones that do that, not the battery operated ones we have now. But for other dogs, why can’t the sound just be more pleasant (even that voice is better, but with those detectors, the voice just alternated with the beeping)?

If you google “dogs and smoke detector beeping” you will find pages and pages of stories about this very thing. When I did that research I also turned up a newer smoke detector called “Nest Protect”. This smoke and carbon monoxide detector connects to your Wi-fi and notifies your phone when the batteries go low or the alarm goes off. (link below is an affiliate link)

Since one of my biggest fears is a fire in the house when we’re not home, this is extremely appealing to me.  Even at over $100, it’s something to think about. The only thing is, I wonder what it sounds like when it goes off?