For the last few weeks, we’ve had three deer visiting our yard pretty regularly – a big Mama deer and two young ones. Though we’ve seen them all times of day, mostly they show up in the early morning. Luke knows that, and does not forget; so every morning first thing when we get up he has to go out on the deck and look for them.

I usually try to also check for them before I open the door, so I can watch them for a few minutes too before he scares them off. Actually, he’s pretty good though, he doesn’t usually bark at them. He runs along the fence bounding like a deer himself.

The deer are used enough to us that they seem to know we won’t (or in Luke’s case, can’t!) come closer, so they don’t always run away immediately. Both Luke and I are disappointed if they’re not there! They were not on the morning I took the photos, I will have to try to get a photo of them next time they show up. It’s a nice way to start the day. 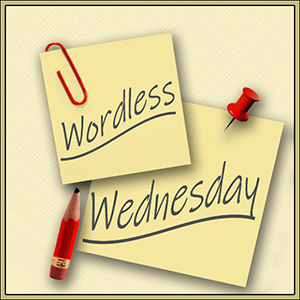 We are joining our friends at Comedy Plus for the Wordless Wednesday blog hop. You may visit them and other blogs through the links below.