Is it just me, or does Old Man Winter seem especially crotchety this year?  There’s a reason he’s always portrayed with a mean look on his face.  I’m betting anyone in New England would agree with me.  We haven’t even had the extreme weather where we are in NH that areas south of us have, but it’s been a rough one in other ways too.

Excuse me while I whine just a little bit, which I’m pretty sure I do every winter!  Though usually I’m not whining until March or so when I’m really ready for spring.  Don’t get me wrong, I know that others have had it worse than we have but I need to vent a bit.  With everything going on with Sheba, I’ve been pretty unfocused the last few days, and I thought venting a bit might help me get my focus back.  I missed a usual day of posting, and I’m behind on visiting and commenting on other blogs.  I read quite a few, but can’t always seem to formulate an intelligent thought for a comment.

The Weather:  We had a big snowstorm before Thanksgiving and were looking forward to a White Christmas.  Then the weather strangely warmed up and every time it precipitated it ended up as rain, then shortly thereafter the temperatures would plunge turning everything into a big icy mess.  Eventually late January it stayed cold enough….too cold….and all the precipitation started coming as snow.  And continues to come.  We haven’t had the record amounts of snow like the southern part of our state and Boston have had, but it seems to be snowing about every other day.  Just enough to make the driving hazardous around here almost daily.

The dogs were happy to finally start getting some snow, only much of the time it’s been too cold to go out and play in it.  This coming weekend, the middle of February, they’re saying we’re going to have the coldest weekend yet!  I used to have a rule that I didn’t go outside unless it was at least 20 degrees out.  I had to lower that rule to 10 degrees in order for the dogs to be able to play out there!

We have accumulated a pretty good amount of snow, and unusually this year it’s all been light and fluffy (due to the cold temps I guess), so that we’ve lost many balls out in the yard that won’t be seen again until spring.  It’s a good thing we have a pretty good supply of them.  It’s fun to see the dogs with their heads in the snow, but with it being so cold, I have to limit the time they do that.  Last year we let Cricket do that too much one time, and she spent a whole evening squinting her eyes and worrying us!  Luckily she was fine.   Apparently she keeps her eyes open when she puts her head in the snow, instead of just using her nose to find the ball!  So I’ve had to literally carry her in the house a few times now, because she doesn’t want to give up on finding the ball! 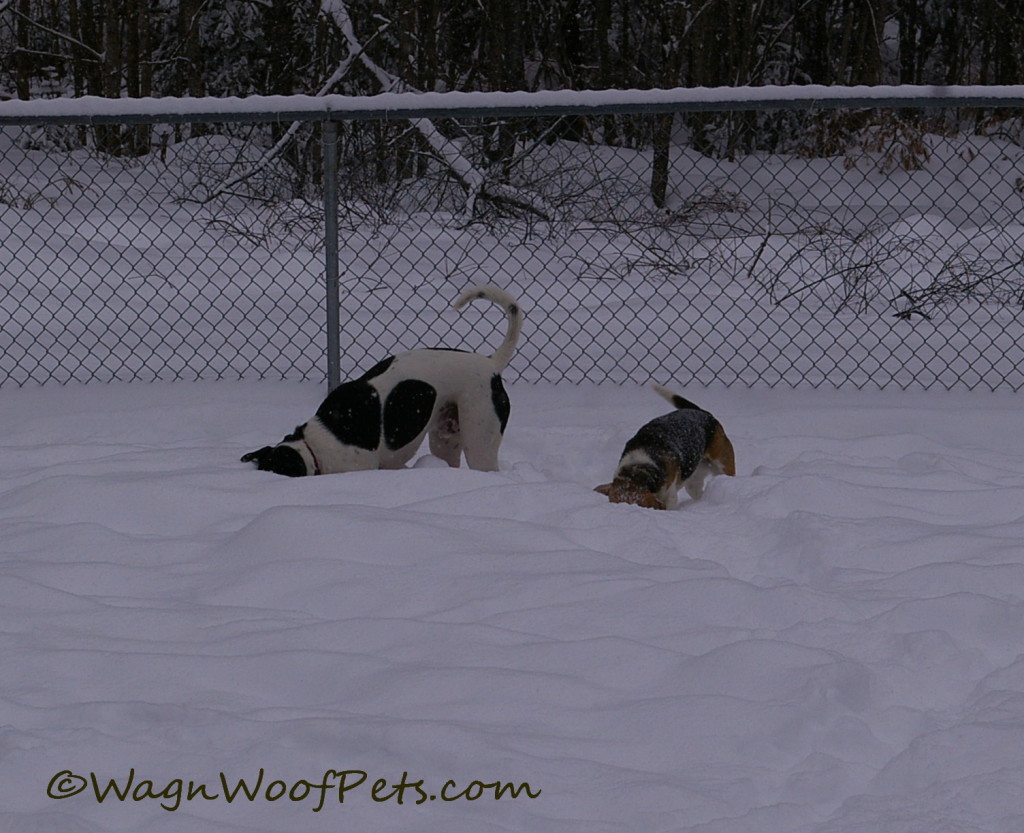 Luke really has been cold sometimes, and even though at first my hubby thought having him wear his sweatshirt was silly, now he realizes he needs it.  A couple of times when I didn’t put it on him, he wanted to go back in the house, and one time he was even shivering.  We pick on him a little bit about being from Alabama and not being able to handle the cold!  His fur really is far thinner than even Cricket’s.  Then he decided he needed to modify his shirt….so I ordered another shirt and a coat, which I’m still waiting for.

The Dogs’ Health Issues, with updates on both:  First we dealt with Luke’s luxating patella diagnosis and having to keep him quiet for a month after that.  Now we are dealing with Sheba’s lump removal, and she’ll need to be quiet until her stitches come out next week.  I’m trying not to worry about the lab results we’re still waiting for, and trying to be optimistic that it will turn out to have been a cyst, and not cancer.

Sheba is doing well, so far she seems to be healing as she should be.  She’s not happy about not being able to go out and play much though.  I tried taking her out yesterday while I shoveled and she just got too rambunctious, even though she seemed to stay out of the deeper snow.  I tried to remember what I had done with Luke when he had to be quiet, and finally recalled that I let him out on the deck with me.  I tried that with Sheba but she kept jumping and barking, and I worried about her popping a stitch or something.  She seemed to handle having to be inside fairly well though.

We’ve been taking her for short walks up and down the driveway.  Her side seems to get cold pretty quickly, plus it’s been snowing for two days so it’s not safe to walk on the roads with the snowplows out.  The snow in the woods is too deep to walk her in without worrying about her stitches getting too wet.  When she first came home from the vet’s, she was really gimpy, and we think the days of inactivity there made her arthritis act up.  Since we’ve had her moving around the house more, and have been taking her for those walks, she is much better as far as that goes.

I haven’t mentioned Luke’s knees in a while.  It seems to go in spells…for a while you won’t see him holding up his leg at all.  But the most disconcerting thing about when we do?  It’s now his LEFT leg he’s been holding up (and at first he was yelping when it popped, but that at least stopped).  He was diagnosed with Grade 1 in his left leg, and Grade 2 in his right!  We first saw the left one come out right after he’d been diagnosed, but then it didn’t happen for a while.  Now it’s been the left far more than the right.  We’ll have to discuss this with our vet when he goes in for his yearly appointment soon.  Does this mean eventually he’ll need surgery on both legs?  I don’t even want to think about that right now.

There IS a bright side here though.  It’s the middle of February, so the temps have to get better soon, right?  Then we can get out playing more and even do some snowshoeing, now that we have some snow.  I mentioned the other day how good the other dogs have been with Sheba too.  When we first brought her home we gated her in the office for a while to be sure they were all OK and didn’t bother her too much.  They seemed fine so we let her out and other than sniffing at her stitches every so often, Luke has not been bothering her at all!  It’s almost like my friend suggested, he seems to sense that he needs to be gentle with her.  He’s stolen the ball from her a couple of times, but hasn’t gotten rough with her, and she seems to know at this point that she can’t roughhouse either.

I think I crave routine even more than the dogs do.  This winter it’s just been difficult to establish one, between the health issues and the weather.  Eventually Old Man Winter will have to go to sleep (right?), and hopefully everything will settle down by then.

Have you entered our giveaway for One Dog Organic Bakery treats and gift certificates?  There’s only a couple of days left, so don’t miss out!  Click here to be taken to the review and giveaway.