Sheba had surgery on Thursday to have a questionable lump removed. This lump was in the same area as the cancerous lump she had removed about 11 months ago, but this one was much smaller than that. However, I thought I could feel another small lump underneath this one, and that was what really worried me.

Unfortunately, it turns out that I was justified in my worry. When she was shaved for surgery, they could see what looked like other lumps, and when our vet was done he had removed a large area of connected lumps, and she had a 6 inch long incision. He feels strongly that it’s the same cancer as before, and he did his best to remove all he could find, and to leave “clean margins”.

If you’re squeamish…scroll past this photo. I tried to blur it just a little, I really just wanted to show the length of it.

Because of what he found, he wanted to do chest x-rays to check for cancer in her lungs. I think that was the phone call that scared me the most. They did find one small spot that they will want to keep an eye on, but that was it. What a long day of waiting and worrying that was, and none of it was the news we wanted to hear.

We could never feel those other lumps, between her thick fur and the fact that the probable cancer hid underneath the layer of fat just under her skin. I asked the doctor if he felt that this stemmed from him not getting all the cancer last time, and he said yes. The one good thing about that is that it’s been close to a year, so if it comes back hopefully it will be slowly again. That probably gives us a best case scenario of another year with her. Until we get the lab results to verify exactly what it is though, we won’t know what her long term prognosis is. We’ll find that out in a few days.

In the meantime we are trying to focus on her recovery. She is really doing great. After the last surgery we were dealing with seromas (pockets of liquid) which caused concern for possible infection, but so far this time her incision is looking great; there is no swelling or redness.

She spent the first couple hours at home in the crate (considering she has never been crated I was impressed with her that with only working on it for one week, she was willing to go in). As you can see in the photo below she is not happy about it though. I wanted to keep her quiet while she was still loopy from the drugs, and keep her separate from her siblings for a while – they can get weird (snarly) when one comes home from the vet or doesn’t feel well. 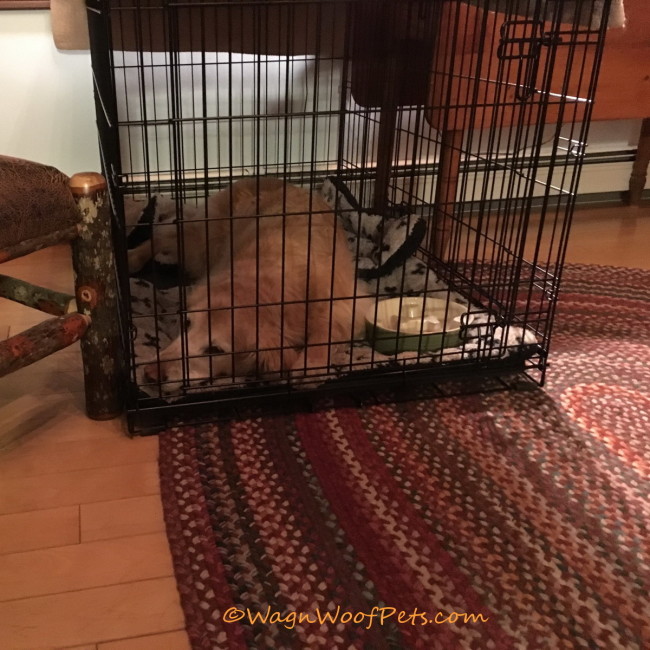 She was much happier when Dad got home and we let her out to come up to bed with us. We haven’t had to put her back in since. She seemed pretty good the next day, but I think the pain killers the vet gave her were still helping then. Saturday morning she was quite stiff and had trouble going up and down the stairs. But by afternoon she was better. We gave her Rimadyl with the vet’s OK, and Sunday morning she did much better on the stairs – still slow but not as bad.

Since then the challenge has been keeping her and Luke from playing, and keeping her indoors while Luke and Cricket get their exercise. But she is simply the best patient – look, in the second photo, you can see she’s still smiling!

She is a trooper and a strong girl. If all continues to go well, then the stitches will be out two weeks after surgery and things can get back to normal for her. I dread the phone call with the vet, and what we’re going to find out, but I’m not going to speculate about that too much. If it’s the same cancer, there is not much treatment other than radiation available and we opted not to do that last time. We’ll deal with all that when we know more for sure. I am trying to stay optimistic but I’m still very scared. Our past dealings with cancer and our pets have never been good. It’s an insidious disease and in our experience often comes back with a vengeance. 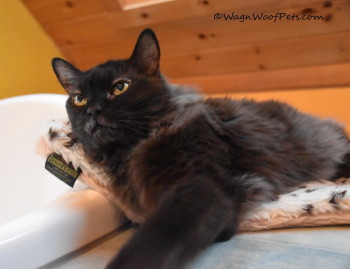 You might remember that Sam is hyperthyroid, diagnosed over 6 months ago, and they also suspected she might have cancer when she stopped eating around the same time. But a short time on prednisolone last spring got her eating again, and we didn’t have the invasive tests done that they recommended. I honestly thought it was the thyroid meds, or the stress of just having to take them that affected her appetite and I might have been right.

I feel lucky that it seems we made the right decision. Sam went for her 6 month blood test last week, and her thyroid levels are right where they should be. She tolerates the meds well and takes them daily with very few issues. She has gained back all the weight she lost back then, and her appetite remains good. She’s still finicky but we’ve found certain things that she continues to like so we’re just sticking with those.

I was actually concerned that she was overweight again but the vet thinks she is perfect (phew, is Sam relieved there’s no diet!). Her coat is soft and healthy. For a while she constantly had little scabs around her face which we could never determine the cause of for sure. When I was brushing her the other day, she had no scabs whatsoever. Right now she seems extremely healthy and we are thrilled about that. She’ll continue with her current dosage of thyroid meds and hopefully stay that way for a long time to come!

Now to hope for good news for Sheba…..maybe 6 months to a year from now I’ll be writing about how well she is doing – paws crossed.