I’ve never been one who walked my dogs every day. For so many years we had multiple dogs and a fenced in yard, and they always got lots of fresh air and most of their exercise playing in the yard. I did walk some of them sometimes, particularly our beagle Kobi who didn’t play, and our golden retriever Sheba who was easier to walk when she got older. It was never daily though, usually hit-or-miss, and not on a regular schedule.

All that has changed now. We’re a one dog family and that one dog doesn’t play fetch like his siblings did. When we still had Sheba, she and Luke would play together a lot, so I always felt like he was getting enough exercise. After we lost her, I tried to walk him more; sometimes alone and sometimes with Cricket. He did at least play in the yard some, but with Cricket now gone he just doesn’t get the game.

Luke can be a funny dog; he alternates between being high energy and being a couch potato. When he sleeps, he sleeps hard, but until he’s ready for that? He needs his exercise and he needs to be entertained.

We have just recently finally gotten into a regular routine and walks have now become almost daily. We were doing that even when it was still way colder than it should have been, but now that spring has finally arrived I am enjoying those walks much more. We might skip a rainy or busy day here and there, but for the most part we’re on a regular schedule of walks, even though the time of day can be different depending on what work I need to do that day.

Not only have those walks become routine, but I feel like Luke and I have been finding our rhythm – he is walking more nicely (far less pulling), and I am being more patient when he wants to stop and sniff.

I often let him choose our route. We walk in our own woods and we have a few different trails, so we can go different ways and change it up most days. On the occasion when I want to go a certain way, I just take a step or two in that direction and he is right with me. I might say “this way” but even when I don’t, he quickly catches on. It’s like we’re in sync, each sensing what the other might like. I can suddenly switch directions and he’s right with me.

The only times he pulls are when he sees a squirrel or chipmunk (we’ve been seeing wild turkeys on our walks lately but luckily, he’s had his nose to the ground and hasn’t noticed them), or sometimes at the very beginning of our walk when he’s excited. That’s a long way from where he was before when he and Cricket would be pulling me two different ways. I used to get impatient when he’d stop at the same places on every walk and sniff endlessly. Our beagle Kobi was like that too, and I’d be urging him on, so we could get our exercise and our time in! Now, however, I just let Luke do his thing. If I need more exercise, I’ll get it another way (I plan to start running again soon).

He also checks in with me on walks on his own. I don’t have to call him to me, he’ll just stop and come see me and then I tell him to “watch me”, he makes eye contact, and then gets rewarded with a treat. 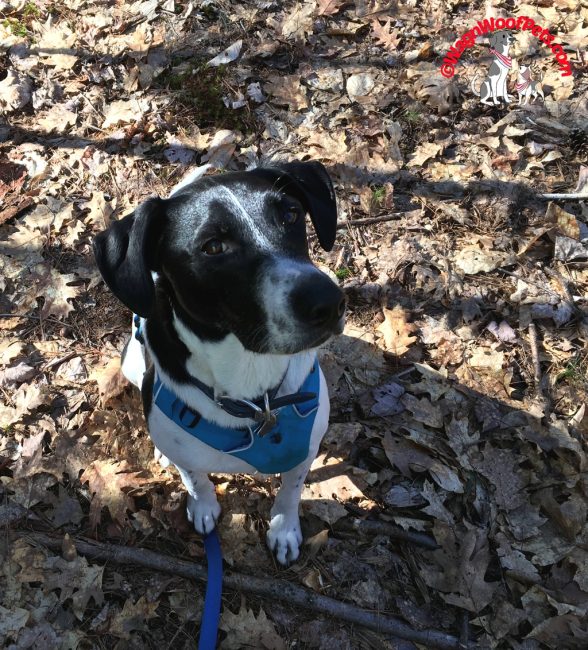 The only disagreement we have on walks is over the deer poop he insists on eating every chance he gets (and we apparently have a lot of deer in our woods!).

I’ve even noticed that Luke is calmer when I’m putting his harness on for our walk. He actually holds still while I do it! I don’t know if he’s just finally learning that it goes quicker if he does, or if having his sister staring at the door and fidgeting when she was waiting was winding him up more!

He still does insist, however, on biting the leash as we head out the door, so we still have a little bit of work to do. I never expected perfection, and I am very thankful for the progress we have made!

Thank you to our friends at Brian’s Home for hosting the Thankful Thursday blog hop. Please visit other blogs through the links below!