I mentioned recently that Luke did well being in his crate when we had company a couple weeks ago. That was before we decorated the crate for Christmas. In the ten days since that post, we had another huge success and breakthrough. You see, Luke will go in his crate, and he is now comfortable in there and settling better when closed in. However, he never went in the crate without me telling him to, or luring him in with treats or toys. For the first time ever, he did just that recently….and he has gone in several times completely on his own. Even though he hasn’t stayed in there long so far, he lies down when he goes in, and he even took his toy in there to chew on when he was playing keep-away with me! 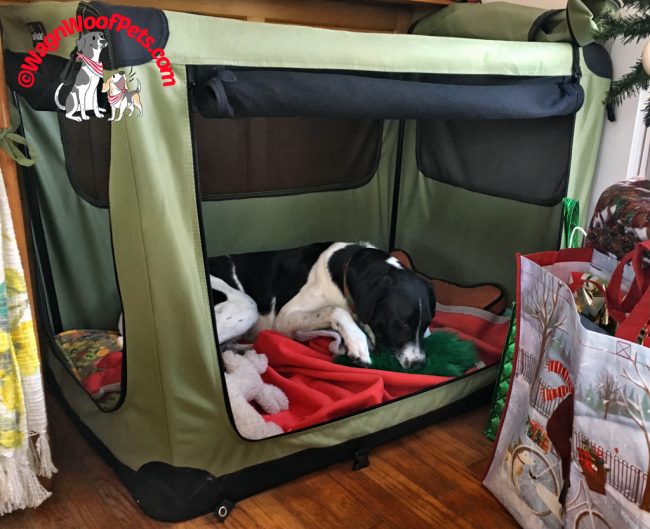 It has been a long-time goal to make the crate a place where Luke could feel safe. When something scares him, he goes running down to our bedroom and hides in our large walk-in closet. While I am fine with that if it’s what he needs, we put the crate out here in the living area where we are the most, in the hopes that he would make that his safe place instead so he would be closer to us. That was in addition to having him be in there when strangers come over.

It’s been a long road to get to this point. Short history, for those that don’t know: Luke was crate-trained as a puppy, and he loved it. When he no longer needed it (and outgrew it), we put it away. Later on, when he developed his fears, I realized it was a tool we could use. We bought a larger metal crate, but right after setting it up, he scared himself in it and would not go in again. It was March of 2016, just before we moved to our new home, that I used some fun training (“Luke’s New Trick“) to try to get him to use it. We had limited success there, and by the time we settled into our new home, I just didn’t have the heart to start it all up again.

That was when I decided to try a soft-sided crate instead (it was the noise of the metal one that seemed to scare him); and that September we ordered a Noz-to-Noz Soft Crate (affiliate link).  By October I had him going in it (“Finally – Progress!“), but it had been a year (“Making a Crate a Safe Space for an Adult Dog“) since we reported any more progress. During that time, we’d have the crate out off and on, but not all the time. When a friend was coming for the weekend back in the fall, that was when we used it for the first time for company (it went well), and we’ve kept it out ever since (we found Cricket loved sleeping in it too).

I think we’re darn close to having the crate finally be exactly what I wanted it to for Luke, and it even seems like he hasn’t gone down to the closet nearly as much lately. The moral of the story? Don’t ever give up, but be open to trying things differently if the first round doesn’t work (I doubt we would have made it to this point with the metal crate). We probably could have accomplished this more quickly if I’d been more consistent, but it could also be that Luke just needs to do things in his own time too. Either way, it feels like celebrating this success is a great way to end what has been an otherwise difficult year.

That was all my long way of explaining to you why this is my favorite photo this week: