As Cricket told you yesterday, I’ve been working on a post about the challenges of working from home when you have pets and you’re also writing a blog and caring for a farm. I had a day last week that was what really inspired me to start that (hopefully the full post will be coming next week).

Here’s just one thing that happened that day: I was working at the dining room table, where it’s big enough to spread all my bookkeeping files out, and I can also keep a better eye on the birds out in the yard. We’d had a couple hawk sightings recently, so I needed to be diligent.

One minute they were all – chickens and guineas – happily sun- and dirt-bathing by the coop and garage.  It was cold and windy, but the sun was out. The next time I looked out, there was no one to be seen. Not a soul. I pulled out the handy binoculars to look into the garage to see if they were in there, and then in the coop. Sometimes the guineas are right near the door, so I can spot them moving around. No one.

Now, I’m not overly worried, because usually if something is going on, the guineas will be putting up a fuss, and even with all doors and windows closed, I would hear them. When I went to the front door to peer out, it was strangely silent. Sigh. Now I’m not going to be able to focus on working until I know they’re all OK.

I’ll be so glad when winter is over, and I can just walk out the door without having to don coat, hat, and boots. I headed to the garage first, and looked around to where I couldn’t see from the house (behind the right-side closed door) and this is what I saw:

Thank goodness we have a cover on my Mustang! Apparently, they must have thought that was a great spot to get out of the wind. That’s only part of the flock there, but I went to the nearby bag of sunflower seeds and threw some out, and most everyone else magically appeared (the guineas probably were indeed in the coop, but up on the roosting bars). 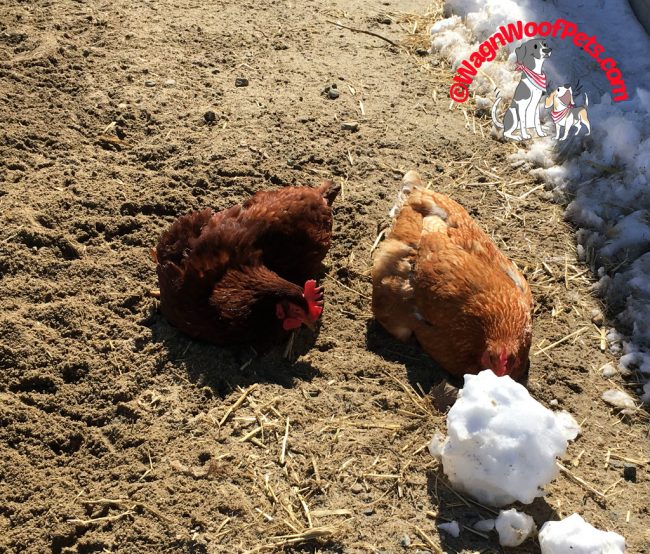