Well, folks, it happened. Did you read my post last week about our guinea hens getting into the dog yard? If not, you can read that here: “The Perimeter Has Been Breached”. I was afraid it was only a matter of time before Luke and the guineas ended up in the yard at the same time. (Don’t worry about reading further….this ends well!)

Cricket, Luke, and I were outside playing ball, when one of the guineas flew right into the pen! I hadn’t seen it at first, I was doing my usual yard cleanup while throwing the ball. Luke was around the corner chewing on his own ball, while I frantically tried to get the guinea to fly back out.

Sure enough, here Luke came before I could, and he actually ignored the bird at first! Luke tends to be pretty focused on what he’s doing, and he still had the ball in his mouth. But then he spotted that bird flapping around, dropped his ball, and ran towards him. I was also running, yelling “leave it”, but I saw Luke grabbing at that poor bird. Well, I don’t know if Luke was listening to me, or if he just thought it was fun enough to get a mouthful of feathers and then run with them.

I was able to grab him by his harness and pull him towards the house (it made it easier that he was still wearing his harness from our earlier walk). While he struggled at first, I started saying another cue “with me” (one we learned as part of our reactive dog training class), and that relaxed him, and he came willingly with me and into the house!

I checked on that white guinea hen, and he was fine. I’m still a little unsure of what Luke’s true intentions were! Was he trying to hurt the bird, and the bird just got away? Or did he just want to play with it, and getting a mouthful of feathers was fun enough? When he ran with those feathers in his mouth, he acted exactly like he does when he has a new toy, or has taken something he’s not supposed to have (such as a sock, slipper, or tissue).

One thing I can’t be clear on is if he could or would have hurt the bird either accidentally or on purpose (did he not really bite down, or did he just grab it in a spot that was mostly feathers?), so we’ll still work hard to keep them separate. It does seem like he’s been chasing them more when they’re at the fence than he was before this happened, so he seems more interested in them now!

I am at least happy to see that his training is paying off again – whether it was the bite inhibition I taught him as a puppy, or his listening to my cues of “leave it” and “with me”, it really has been worth all the work I’ve been doing with him!

By the way, that bird never did fly out, I had to open the gate and herd him out. Are the birds smart enough to now stay away from the yard? Well, the last two photos were taken after that episode, so you can see for yourself about that. They were even closer to the fence at times! So now when I see them at the fence, I’ll throw the ball in that direction in the hopes that it will deter them from sticking around, or at least flying in! 🙂 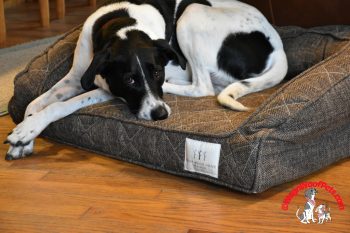 Farm dogs need to snuggle on a cozy bed after a long day of chasing birds! That’s why we love our new memory foam orthopedic bed from Brentwood Homes. Read more about these stylish beds by clicking here, and enter to win one for your pet!