Thanks to a sweet little Miniature Schnauzer named Pixel Blue Eyes, who I found through Facebook, I have learned more about the campaign to put an end to the practice of tail docking.  Many of you may be familiar with this procedure, but like me, did not realize how this completely unnecessary practice can lead to ongoing pain and nerve problems for many dogs. 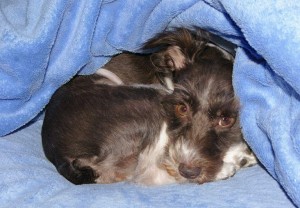 I don’t think I ever thought about it much, when seeing a dog with a very short tail, or virtually no tail at all.  Some dogs are born with short or stubby tails.  But for 50-70 different breeds (most in the terrier/spaniel families), their tails are docked, most often when they are only 2-5 days old.  This is a surgical procedure which basically severs what is the end of the dog’s spine, cutting through bone, cartilage, nerve endings, tendons, and muscles.  It can be done by a veterinarian, but is often done by the breeder.  The tail can be cut off with a surgical instrument, or even banded tightly until it just falls off.  Often no anesthesia or pain relievers are used!  It had been believed that new born puppies could not feel pain, but that has since been completely discredited.

Why are they even doing this?  The origins of tail docking can go back to ancient times, but their reasoning back then has no place in modern times.  More recently, tails were docked on working dogs to prevent injuries; such as injuries to tails from farm equipment, or injuries out in the field for hunting dogs.  Even if that reasoning holds much merit, which I don’t believe it does, many, many dogs with docked tails become family pets and are not working dogs at all.  For the most part, tail docking these days is mostly for cosmetic purposes.   Either way, the chance of tail injury for any dog may very well be less risky than a surgery which always brings about risk of infection or complications.  But that is not the only risk.  Some dogs go on to be fine after this surgery.  Others don’t, like Pixel, pictured above.

Complications from tail docking can include long term chronic pain and distress.  It can lead to problems with potty training.  Without a tail, a dog may be unable to express his anal glands (this happens naturally for most dogs when they have a bowel movement), and this painful procedure can have to be performed by a veterinarian.   Dogs with this chronic nerve pain, like Pixel, often go in circles biting at their tail, trying to run away from the pain it is causing them when they merely try to wag their tail.  They may have to take nerve pain for the rest of their lives.  Pixel had an additional surgery back in August to help with her pain.  Improvement has been seen, but she may never be completely without this pain.  The video below shows the distress she has experienced when her nerve pain is acting up.

Many European countries have now banned tail docking.  It can only be done by licensed veterinarians, and strictly for medical reasons (such as injury).  Countries such as Australia (all the way back in 2004), Sweden, Norway, and Finland have banned it.  Others, such as the U.K., have restricted it, so that only veterinarians can perform the procedure.  The American Veterinary Medical Association (AVMA) also opposes cosmetic docking, but it is not illegal in this country, or in Canada (federally….some provinces such as Newfoundland/Labrador have banned it).  I hope that most American veterinarians would refuse to do this, unless medically necessary. Unfortunately, we all know that greed often overrules common sense, so our country needs to take the step of banning it in the same way those other countries have.

Breeders are still performing this procedure, for cosmetic purposes only.  The AKC breed standards are still calling for docked tails in many breeds. Even though these standards ultimately come from each individual breed organization, this is not helping at all. The Australian RSPCA say this an unnecessary procedure that compromises the welfare of the dog. It is of interest to note that in these countries that have made it illegal, or restricted it, that dogs are not allowed to compete in dog shows with a docked tail, unless it is as part of a working dog category, or if the docking was done before it became illegal.  They even dock points if their tail is docked!  That is a far cry from what our AKC is doing, which is basically nothing, to help.   The AVMA  believes there is “insufficient justification” for this surgery.  It is only being done to satisfy an owner’s (or breeder’s) impression of what a pleasing appearance is for a certain breed.  It’s not like the dog’s self esteem is boosted by cosmetic surgery as a human’s might be! 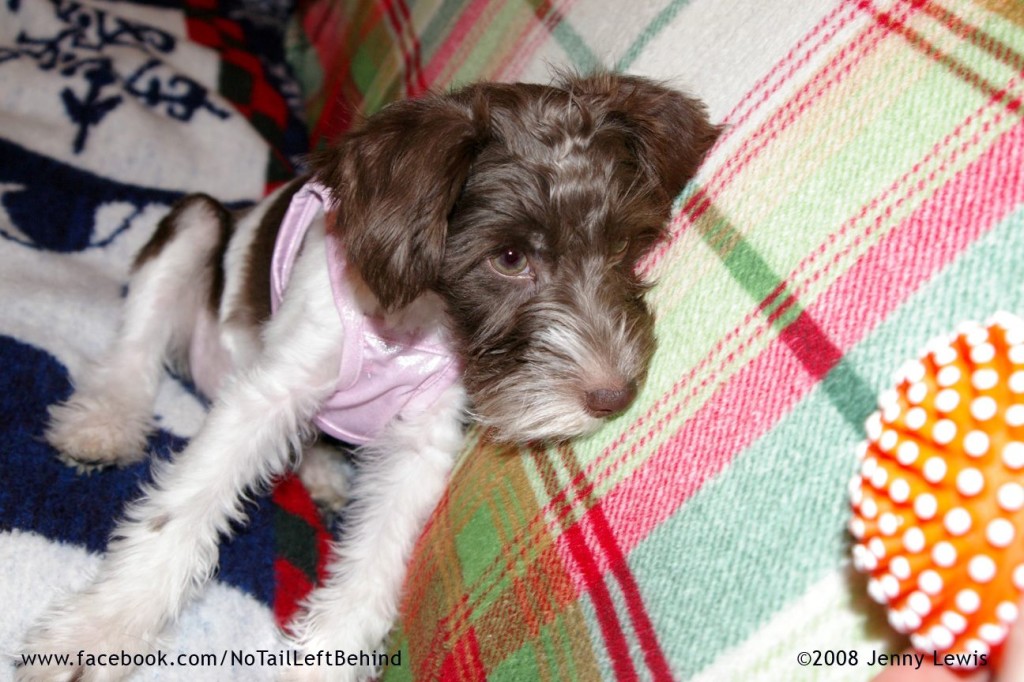 I believe dogs express themselves with their tails.  There is nothing like a wagging tail greeting you when you get home.  If your dog’s tail is tucked between it’s legs, you know they are nervous or upset about something.  Can you see the tail blur in the photo of Cricket below?  That is certainly telling you something! 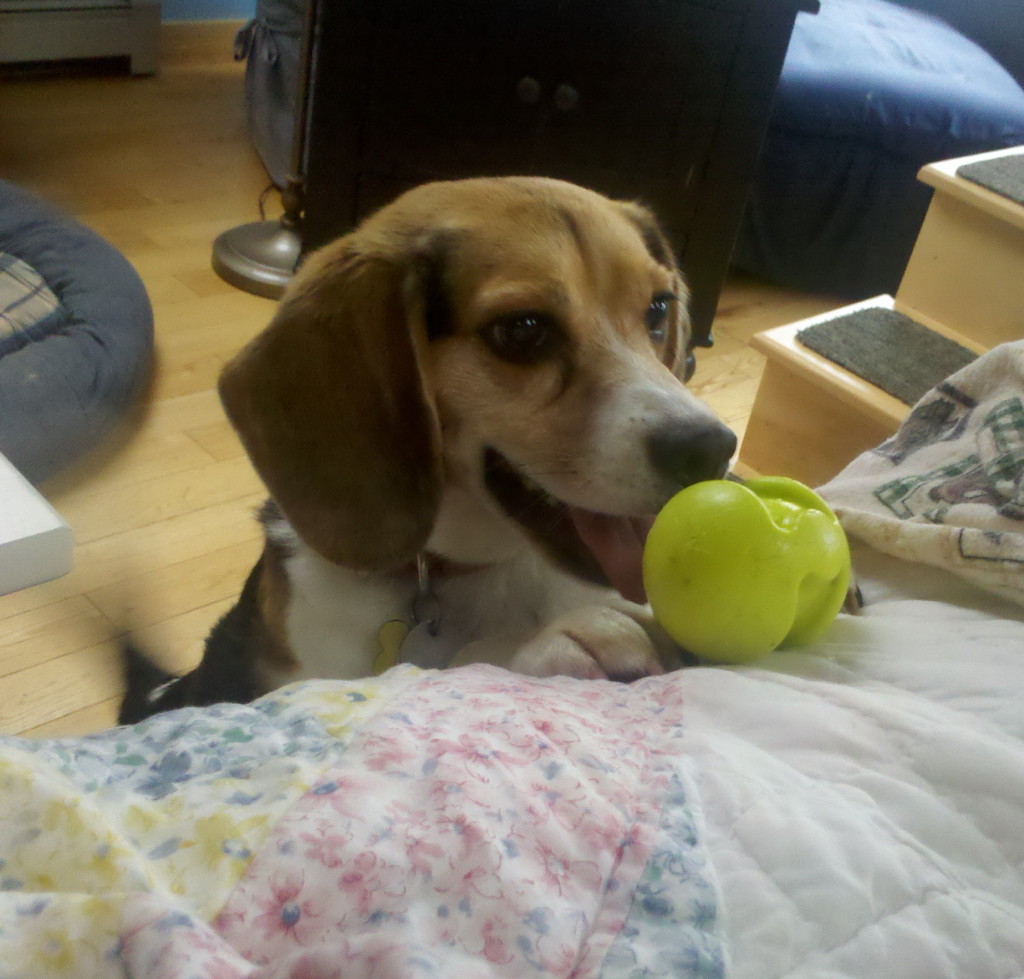 Pixel’s Mom has started a campaign to try to raise awareness on this topic.  She has a Facebook page dedicated to it called “No Tail Left Behind”.  Pixel also has a blog where she tells about her daily life, as well as about her history with this issue, and more about the campaign to put an end to it.

What can we do to help?  As with everything else, we need to spread the word.  Please read about the campaign through the link above to learn more about this subject.  Like and share her Facebook page to spread the word.  Most importantly, don’t ever buy a puppy or dog from a breeder that docks the tails of their dogs. 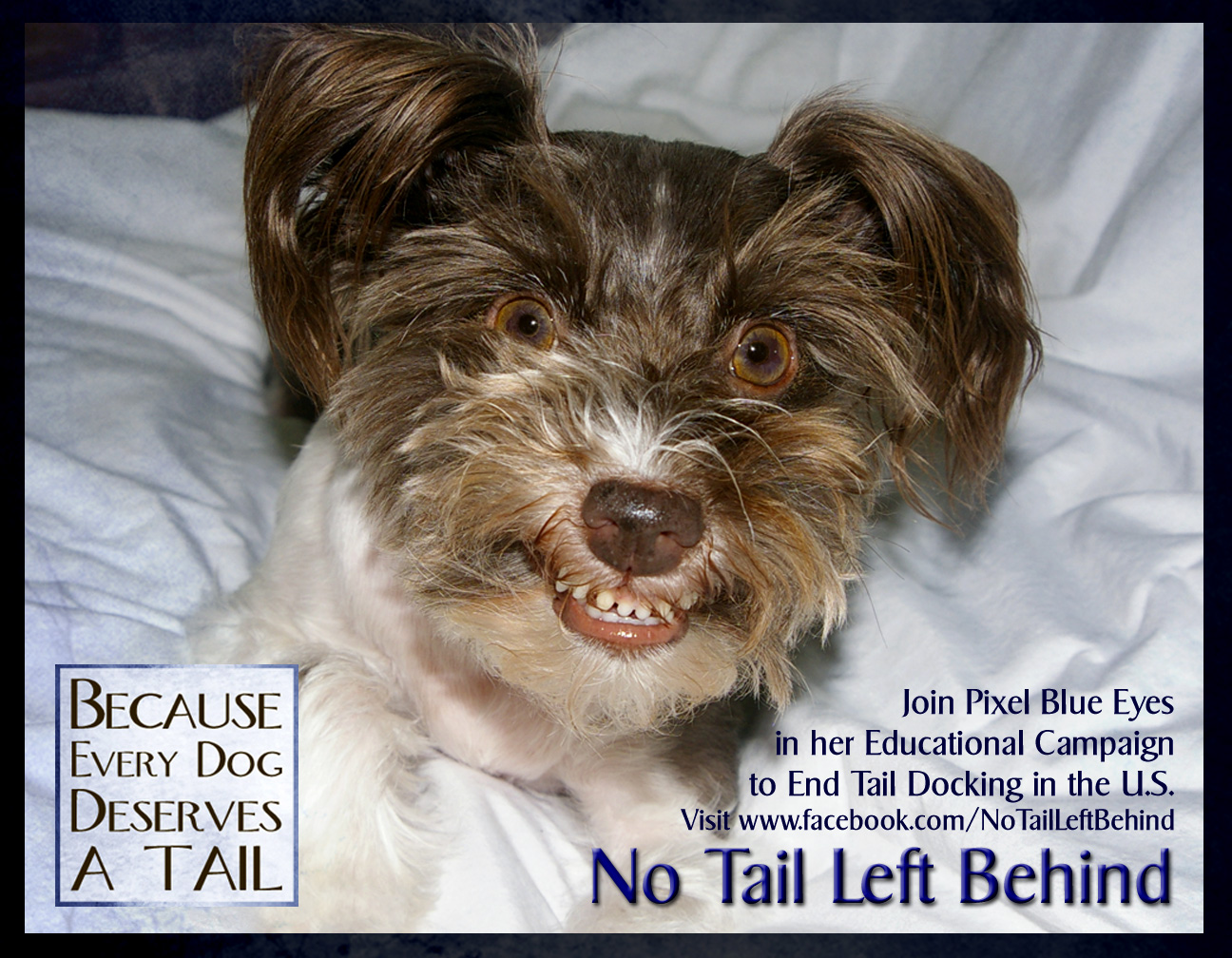