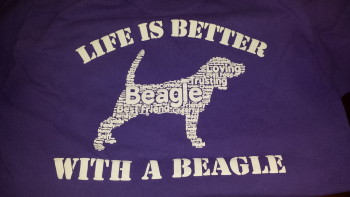 I have this fun t-shirt “Life is Better with a Beagle”. I saw it on Facebook in one of those TeeSpring deals, and I got one for myself, my hubby, and my sister last Christmas.

I wore it to work one day over the summer, and I got this comment from someone “Is life really better with a beagle, Jan? I mean, all that barking. We had one when I was a child and all they did was bark” (or something like that). She tried to come across like she was half joking, but I know she wasn’t. Granted, this is someone I don’t really like anyway, and she often pushes my buttons (along with everyone else’s at our store). She tries to be understanding, but she’s not really a dog person.

It may not have irritated me like it did if it had been the first time I’d heard this. She’s not the only person who has made a face when we say we have beagles and commented: “Don’t they bark a lot?”

Yes, beagles are known for their “A-roos!” (which is music to a beagle lover’s ears). I’m not going to claim I’m an expert on the breed, Cricket is only our second beagle. But barking has not been an issue with her, nor was it with our late beagle Kobi. They haven’t barked any more than some of our other dogs.

Every dog of every breed can be different, but we’re probably all guilty of making generalizations at times. We got a second beagle because our first beagle was such a great dog. Kobi was laid back, easy-going, friendly to everyone, and he probably whined when riding in the car more than he ever barked. Kobi hated water and wouldn’t have dreamed of chasing a ball. When we walked, he stopped to smell everything along the way.

Cricket is almost his complete opposite. Cricket is high-strung, energetic, and cautious with strangers and other dogs. She is obsessed with balls, and loves to cool off in the pool. When she walks she intensely moves forward and rarely stops to sniff anything.  I’m not sure I’ve ever heard her whine. I’m not going to try to tell you she doesn’t bark, but when people think of beagles, they think of a dog outside incessantly barking at whatever. The deer must have been around last night, because Cricket was out on the deck carrying on for a bit. But she wasn’t alone…Luke (our Lab mix) joined in. We don’t have very close neighbors, but they are close enough to hear the barking, and we’re sensitive to that. We don’t want to listen to it ongoing either.

We have a simple solution: we tell them to be quiet. If that doesn’t work (and often it works but only for a minute if they still feel the threat is near), we simply make them come in the house. There are also other positive training solutions if those don’t work with your dogs.

Cricket barks at me when I don’t pick up her ball and throw it fast enough. But Sheba also barks when we’re playing ball…just at the other dogs, and not me. I’ve never tried that hard to break Cricket of that habit, but I’m sure I could if I put the effort into it. She barks out the window when anyone pulls in the driveway, and even when we get home. She gets Luke wound up. But none of this is barking that goes on and on and would never deter me from getting another beagle.

Most dog people have a breed they love, and I think we’re all sensitive to criticism of our favorite breeds. Certainly Pit Bull lovers know that better than anyone. Humans have a tendency to generalize and I am guilty of it too. We will probably never get a German shepherd, because our cat was killed by our neighbor’s. But I know that not every GSD is like our neighbor’s, and I also know it’s more the humans fault for letting their dog out of their control. My prejudice is from my own experience, just as the woman who made that comment to me was. But I’m dog savvy enough to know that generalizing a whole breed because of one bad experience is not right. Upbringing and training have something to do with a dog’s personality along with their genetics.

There was a pit bull attack in our state recently. Two out of control dogs attacked a man and his dog (both are OK now). What I hated the most about the way our local news station covered this was that they said the words “pit bull” over and over again in the story. They never just called them “the dogs”. Any dog that is out of their owner’s control could attack another dog. I commented to my friend the other day when talking about this story that never in the story did they call the owners “the idiots” or “the careless dog owners”, which would have been more appropriate (these dogs had apparently had other run ins and should not have been loose).

Certainly if you are thinking of adopting a dog of a certain breed you want to know some of their basic traits. Just remember that every dog is different, and they are not going to necessarily have every trait that is common to their breed. Don’t rule out a breed because of one trait that may or may not show up in the dog you end up with. We adopted Luke because I always wanted a Lab mix like our late Maggie. Luke has turned out to be like Maggie in some ways, but totally different in others.

My sister has three beagles. If barking or anything else was an issue with her dogs, I’m pretty sure they wouldn’t have recently added this little cutie to their family:

Beagles are some of the cutest puppies. That’s the only generalization I want to make.

I need a golden retriever t-shirt like the beagle one I have, and maybe Labrador retriever too. I wonder what people might have to say to those shirts? This post was inspired by a blog post I read about golden retrievers, which might have the answer to that very question. You can use the link below to read it, and another post about Labs that was also inspired by it. Then let us know if your favorite dog breed has been criticized by sharing in the comments below.

How to Piss off a Labrador Owner from That Mutt