It was several months ago when snow was falling off our roof very early in the morning. The Dadz had gotten up for work and I was still asleep. I woke up to feel Luke on the bed next to me shaking. At first, I didn’t hear the sounds of the snow falling, and wasn’t sure what was bothering him. But as the crashes happened off and on, I knew, and I tried to get Luke to come under the bed covers with me. He wouldn’t, and he was too high up on the bed for me to put them over him more than just a little bit. But the little bit, along with my arm around him, did seemed to settle him down some.

*Disclosure: We received one Canine Coddler weighted anxiety blanket in exchange for our fair and honest review. If you order a blanket through our affiliate link, we will receive a small commission.

When I was contacted by Canine Coddler to see if I wanted to try out their weighted dog blanket, I knew right off it was exactly what I was looking for. It wasn’t too long after receiving it that we got our first chance to try it. An especially windy night had caused some smoke to back up into the house from the wood stove. There’s nothing like waking up to the sound of the smoke alarm to freak everyone out!

By the time the Dadz got up and climbed on a chair to disconnect it, Luke was pretty upset and shaking again. I got him back on the bed and put the Canine Coddler blanket over him, and it was not too long before he settled down and we all went back to sleep. The blanket stayed on him until he got up in the morning. 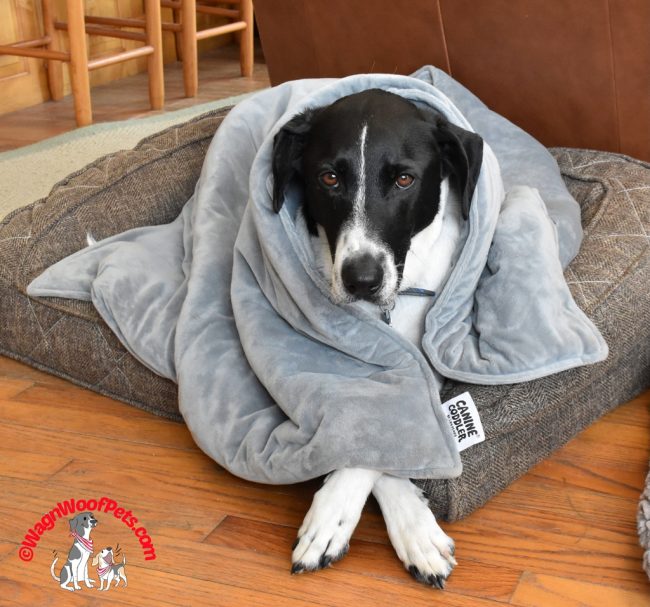 Luke is a smart dog, and he knows that I’ve set the smoke detector off more than once when cooking. Now he knows when I turn the exhaust fan over the stove on, that could mean the smoke detector might be going off. When that next happened (just the fan, we hadn’t even put the smoke detector back up yet!), I could see him start to pace around nervously. As soon as I was done cooking, I got him to lay down next to me at the table, I put the blanket over him, and again, he settled down after just a few minutes.

Since then, when I turn the fan on, he looks a little nervous, but he doesn’t shake, and I can usually just get him to lie down quietly.

As I’ve said before, winter has been lingering here in NH, and we’ve had some pretty nasty weather up until the last couple of days. One particular weekend, we got rain, snow, sleet, and freezing rain for two days. Ice built up on our roof and Monday morning it started falling off in sheets and the crashes were endless. Even I jumped several times, so I certainly can’t blame Luke for freaking out about it! I was working at the dining room table and he got under there by my feet and was trembling. I got him to lay down and put the blanket on him and he relaxed after just a few minutes. 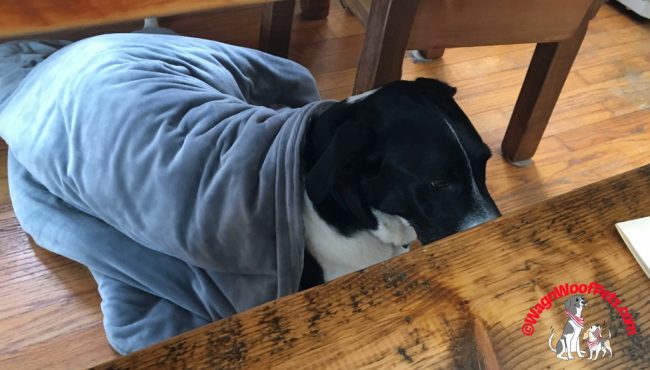 Later, he went to the couch and laid down. He was relaxed, even with some noise still going on! We kind of used the blanket off and on that day and at one point I thought things were settled down, I put it away, and he hadn’t had it on him for a while. Then the wind picked up and he went down to our closet, which is a place he often retreats to when he’s nervous. I think if I hadn’t put the blanket away, he probably wouldn’t have done that.

Since the time we’ve been using the blanket, overall he has seemed less scared than he used to be. He even heard some loud booms outside recently and though he initially retreated into the house and down to his closet, when I went in a few minutes later he came right out and was fine. I didn’t expect the blanket to not only help when he was experiencing his fears, but to alleviate those fears even without the blanket on! I’m very pleased with it. In addition, he loves the blanket. When he sees me get it out, he runs over to smell it. He knows it’s a good thing.

The Canine Coddler is based on the same principals of pressure as anxiety vests like Thundershirt. We never had much success using those for any of our dogs. With those, it’s always recommended to get the shirt on before whatever scares them happens. With this weighted blanket, you can just put it on your dog when something unexpected occurs, and it gives them immediate comfort. That’s definitely been my experience with using it for Luke. When they feel better, they can just shake it off (Luke has actually walked around with his still on him!).

The company developed this product for their own fearful dog, when they saw that weighted blankets made for humans could help dogs as well. They wanted to make their own just for dogs, and they filled it with the proper amount of non-toxic PVC pellets to make it the correct weight. There are two weights: small/medium for dogs under 50 pounds, and large for dogs over 50 pounds. The weight of the blanket simulates the warm and gentle pressure of a human hug, providing a soothing and calming effect.

Some of my other favorite features:

The constant gentle pressure of this anxiety blanket can diminish anxiety, fear, and restlessness in many situations:

Some that I plan to try it with for Luke in the future are:

The only downfall I see to this anxiety blanket is that you would want to be careful during the summer and in warmer climates not to leave it on your dog for too long, to avoid overheating. We don’t deal with that too much where we live and if you have air conditioning that could offset some of that concern.

When you have a fearful and anxious dog, there aren’t usually any immediate and thorough fixes.  I prefer natural solutions over medications whenever possible, so we need every tool in our chest that we can get to help Luke. The Canine Coddler fits our bill and will definitely be staying in ours.

Do you have a fearful dog? Visit Canine Coddler on Facebook by clicking here to learn more. They have a group where members can share tips and tricks for alleviating dog stress and anxieties. Does this blanket fit your bill? Order one for your dog now through our amazon affiliate link: Canine Coddler Weighted Dog Anti-Anxiety Blanket.

Giveaway! Fill out the widget below and get a chance to win a Canine Coddler anxiety blanket for your dog, in the appropriate weight for their size. Good luck!

No purchase necessary. Giveaway is open to 18 and over US residents only. Void where prohibited. Giveaway will run from Monday, April 23, 2018 through Sunday, April 29, 2018 at 11:59pm ET. One winner will be randomly selected by PromoSimple and notified via email. The winner will have 48 hours to claim their prize; failure to do so will result in forfeiture of the prize. Participants must read and agree to PromoSimple’s and Wag ‘n Woof Pet’s Privacy Policy before entering and participating in this promotion. Twitter and Instagram do not sponsor, administer or endorse this promotion. Prize is donated by Canine Coddler and Wag ‘n Woof Pets is not responsible for prize fulfillment.