Of all the things I expected when we decided to get chickens, the fact that I might compare them to dogs was not one of them. Yet, I am starting to see more and more similarities.

When we started letting the chickens go free range, I was concerned about people pulling in our driveway too quickly, and not seeing them there. I am always cautious when I pull in someone’s driveway and there’s a loose dog – will they get out of the way? – but I’ve never pulled in and worried about hitting a chicken. I looked on amazon for a “Chicken Crossing” sign, but never found just what I wanted.

Instead I found this:

“Chickens at Play”* (affiliate link) seemed a bit incongruous to me at the time but I thought it was cute. However, I’ve learned that it is rather apt. They do run around the yard, chasing things (bugs, butterflies, and even small birds) or each other, and I would definitely call it play.

When I got home from work yesterday and went to let them out of the coop, I was surprised to find they had trashed the place! I texted the below photo to my hubby at work with the caption: “Look what your birds did today – they are as bad as puppies!”

Then when weeding my garden pathway last night, I was surprised to see all 12 chickens come running over to me to “help”! The truth is, I’m still a bit nervous about them pecking me, so didn’t know what to think! I wish I’d had my phone in my pocket so I could have snapped a photo.

I have read stories of people with chickens and even roosters who sit on their laps to be petted. I’m not sure we’ll ever get there (or if I even want to!), but they are getting better about being picked up at least.

And the little Guinea keets? Well, they are progressing a bit – I was actually inside the coop talking to them and they stayed on top of their heater instead of hiding behind it! They are far more timid than the chickens (as soon as I reached in there, they hid), so it remains to be seen if they will do anything dog-like. They are messy though. We no sooner put their fresh food in their crate and they have it emptied and scattered all over the floor. Apparently, they prefer to eat off the floor, and I have heard of dogs who do that as well! 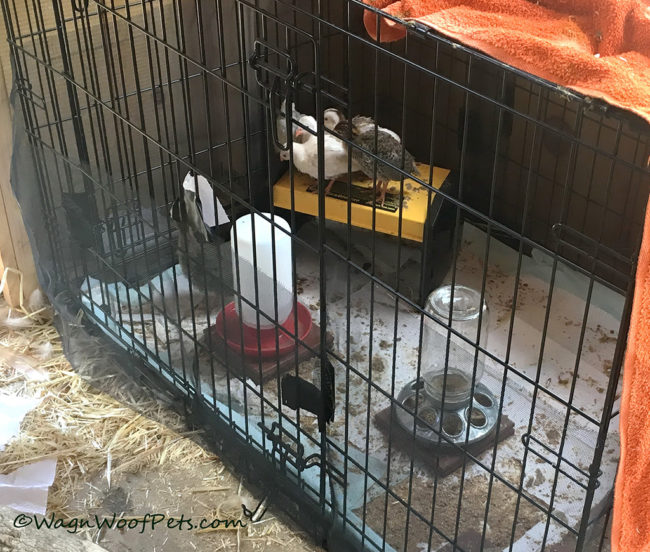 Having farm birds is all new to me, but I am learning to expect the unexpected!