This is the second part of a short series about my former pet sitting business.  The final part will be posted next week.

THE BEGINNING OF THE END

In the interest of helping as much as I could, in spite of some difficulties mentioned in Part 1, and making a little much needed money, I started taking on some of the weekend visits closer to my own home.   One client is going to push me over the edge.  I’m going to call her Greta, which is not her real name.  The situation with Greta was a little different.  She was a dog groomer, and also involved in showing dogs.  This should be a pet sitter’s dream, right?  We are picturing many referrals growing our business!   When we first took her on, my sister and I both shared visits there.  She had 6 dogs in the beginning.  It wasn’t always the same though.  Some dogs came and went.  She would take some with her when she was going to dog shows.  So it wasn’t always the same dogs.  But the real complications start here:  her older mother lived with her.  But she did not want to leave her dogs in her mother’s care.  She never told us exactly why, but it will become clear to us eventually.  She had a nice set up:  a separate large room for the dogs, with crates that they slept in.  It had a door of sorts leading to a fenced in yard (I won’t even go into the treacherous ramp leading to that door).  Greta only needed our services every so often, but we had a few different long weekends that we worked for her, and things weren’t too bad.  Her mother was very nice, though sometimes there were issues getting into the house because we weren’t always given a key; or the key wasn’t left where it was supposed to be.  Lynn was doing most visits then, and sometimes it was difficult to get her mother’s attention to let her in.

The long weekend that put me over the edge, the key was being hidden outside under a flower pot.  Bear in mind here that we are still a fledgling business, and we did not want to turn away any business.  We knew the circumstances weren’t ideal, but we really wanted the business.  Also, Greta had the sweetest dogs!  We weren’t always given a lot of notice, and this particular weekend my sister and I already had plans to go visit my new grandson in Massachusetts.  So Sheryl was also going to help out, so we didn’t have to cancel our trip.  My first visit was on a Friday evening.  I was asked to be sure I locked the door between the dogs’ room and the main house, so her mother could not get to the dogs during the night.  OK, by now we have figured out that Mother probably is in the beginning stages of Alzheimer’s or dementia, and is not  trusted to care for the dogs properly.  This weekend we only have two dogs to care for, so how bad could it be?  These are the sweetest two dogs:  Margo, an adorable French bulldog, and Fiona, an equally cute Pug. 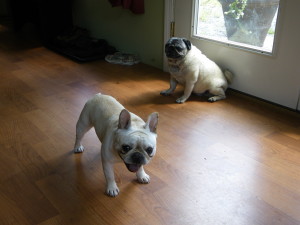 My first night there her mother came out to see me and talk to me.  She insisted that she would shut off the lights, and lock the door behind me.  I tried to talk her out of it, but she said it was the only way she would feel secure.  How do you argue with a sweet old lady like that?  Especially one who is just as stubborn as she is sweet?  The dogs were safely in their crates, so I left.  There is no cell service here, so I had to drive down the road, where I call Greta to let her know what happened.  She seems surprised, but it seems okay.  She clearly doesn’t know how her mother can be. 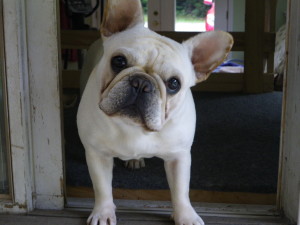 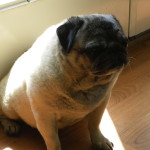 Saturday morning I was up bright and early so I could visit the dogs before heading to visit our grandson.  I hide the key outside by a rock, so that when Sheryl shows up to do the midday visit, she can let herself in and then leave the key back there for me when I return in the evening.  It is a three hour drive to where our son lives.  In the middle of our visit, I got a phone call from Sheryl:  the key is not there, but the door is unlocked.  She asks the mother about the key, and she claims to know nothing.  So now we have a missing key, and the worry of where it went.  Even though we suspect Mother is responsible, we don’t know for sure.  Sheryl had to leave the door unlocked, but we decide that is OK, as I’ll be going back early evening.  We have a nice visit with family, then the three hours’ drive home, and then off I go for my evening visit.  I am tired, and now I have to grill an old lady on top of that.  She will not admit knowing anything about the key at the time, but when I go back the next morning, she lets me in, and the key has miraculously reappeared.  We don’t discuss it.  I’m just relieved.

Then when I go to feed the dogs, I know the food dishes and the bags of food have been moved.  Now I have to ask the mother if she fed the dogs, which of course she also denies.  I call Sheryl to be sure she didn’t feed them, and of course, she had not.  So I opt to just give the dogs a small meal, so they are hopefully not extremely over or under-fed.   Over the whole weekend, often the dog door which I have left open (as instructed by Greta) is closed when I come back.   I am not successful in outsmarting this wily old woman when it comes to locking the door between the house and dogs’ room.  I think she stood right on the other side of the door listening.  One time, I had no sooner locked it, when she knocked on that door.  I just did not have the heart to lock her out of there.

As if all this is not adventure enough…..oh, did I mention that I am a worrier?  That I don’t handle stress well?  That I am worrying and stressing myself to the extreme over all of this?  Now comes the final stressor, where I have to admit another problem I have:  I don’t like thunderstorms.  I am not deathly afraid, but they make me very nervous.  This may be why they also have the same effect on 3 of our 4 dogs (even though I try hard to hide it from them).  So on my final evening of visits for this stretch, at the time I am supposed to be visiting the dogs, we’re in the middle of a bad thunderstorm.  And not one of those short, quick-moving ones either.  When they are finally dying down, or so I thought, I headed over to care for the dogs.  Then I sat with them in their room, which by the way, is mostly windows…..for about a half hour before I thought it was safe to take them outside.  At least the dogs were not afraid!  The storms were still around but seemed far enough away.  That all went OK, and I headed home.

The next morning, I found out on the news that a tornado went through our area, about a mile down the road from my house.  At around the same time I was just getting home.  Now, I have never been in a tornado, and I don’t ever want to be, because the thought of one terrifies me.  Need I say more??  I am pretty much a wreck after the whole weekend, and so relieved when it is finally over.  I think I have reached my limit.

Please come back for Part III – The End!