We interrupt our previously scheduled post for this important winter weather report! This might fall under the category of “be careful what you wish for”. We wanted snow and boy, oh boy, have we gotten it!

Remember I told you about our recent foot of snow on Monday and Cricket’s excitement about it? We got one day off from snow, and then it started again on Wednesday. By Thursday morning we had another 8 inches of fresh fluffy snow on the ground!

For some reason, this time Cricket wasn’t as excited. I’m not sure if the fresh snow has  just  become old hat already, or if she is just so tired from playing in it all week, she had no energy left! However, by the time I got a few things done on Thursday morning and was ready to head outside, she was happy to go! I couldn’t wait to share some of these photos with you; the snow was so beautiful, and I could just take photos of the dogs having fun in it all day. I really had a hard time narrowing down which ones to share. I wanted to show the sheer volume of snow along with the beauty, and of course, all the fun Luke and Cricket had in it!

We have to limit Cricket’s play time so she doesn’t overdo though, and I also had to put my camera away because the snow was still coming down some and also the wind was blowing it out of the trees in big gusts and I didn’t want my camera getting too wet! I’ll tell you what too – it gets tiring out there trudging through all that snow! 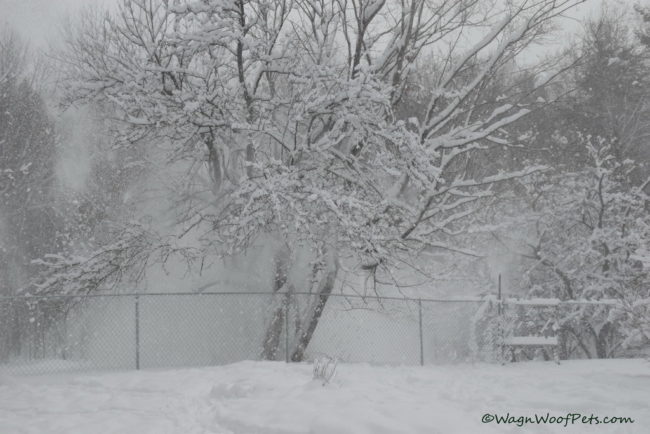 There has been one thing about the snow we do not like. It is a thief, and keeps stealing all the balls! Much of Cricket and Luke’s play time is spent trying to locate the balls once they’ve fallen into that deep snow and disappeared. I try to remember where I threw it, and often I have to help them find it. We’ve lost a few, and I even had to put in an amazon order so we have something to play with until they reappear in the spring. Once the snow gets packed down some more we’ll start losing them less, if we have any left to lose by then!

They are pretty good at finding them, but even now Cricket’s favorite white ball is among the missing (no surprise there)! I would have thought that Luke’s nose was better than Cricket’s, because he is so much more motivated for nose works and is always searching balls out in the house. I think it just has to do with motivation though, because Cricket is way better than he is at finding them in the snow. Nothing motivates her like a ball.

That’s another reason we have to limit play time. Cricket spends a lot of time with her head in the snow and I have to be careful she doesn’t freeze her eye balls like she did once in the past! She keeps her eyes open under the snow we think, and a couple times her eyes were squinty all evening and we figured out that’s what it was from. We’ve started doing two separate play sessions on the days that we can.

This weekend the Dadz and I will be headed out to make fresh snowshoe trails, since last weekend’s got buried. It’s going to be a perfect weekend for it – a little warmer, and sunny too. I can’t wait to see how beautiful it will look in the woods with the sun shining (we never saw it last weekend).

We are getting the winter we wished for in our new home, but the snow can probably slow down any time now – we seem to have plenty!

We know some of you are jealous of all of our snow, but some are just as happy without it. Where do you stand on the issue – would you like us to send some of this your way? 🙂