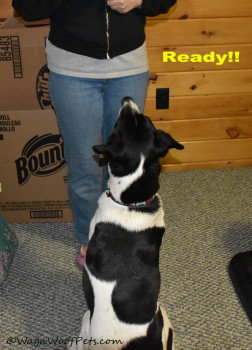 I’m excited to share today two new tricks that Luke has learned since our last post! It’s been a few months since I first taught him “spin” and I decided I wanted him to spin the opposite way, even though I knew it was going to be challenging. Luke is apparently “right pawed” or whatever the official word is, so getting him to go to the left was not easy. We saw another blog share that they used the word “twirl” for the reverse spin, and decided to use that (sorry I can’t remember who shared that now! – let me know in the comments if it was you so I can give you credit).

Once again, our handy Clik Stik

* was the tool that really helped us along. It did take some time, and even though it still needs practice, we’re getting there!

Did you see the blooper? I love that when Luke has lost his focus a bit and is unsure what to do, he defaults to a different trick. We had also been working on “paws up” and “up” on objects and that was one of the places we practiced.

The second thing I wanted to teach Luke was to carry something for me. I had this crazy idea that I could get him to help me by carrying the plastic cup that I always have with me for water around the house. I’m usually juggling several things in the morning when getting up and going downstairs, so I thought I could get him to carry my empty water cup.

As with many other things, it didn’t go as planned. He had trouble picking up the cup at times, and then once when he dropped it on the tile floor it startled him, so that set us back a bit too. I saw a video online with a dog using a basket and decided that might be the way to go. I didn’t have any baskets with handles on them, but luckily Auntie Sheryl came through for us and gave us 3 to work with!

I started back in the beginning, using “shaping”, which means rewarding him for every new thing he would do with the basket, from looking at it until finally picking it up and carrying it. We started with the smallest one, and once he got that down we moved up. It only took a few short tries to work up to the 2nd basket, which you’ll see in the video. We didn’t have luck with the largest basket, but I think it’s because the handle kept falling over and he just couldn’t get a hold of it easily.

The biggest challenge with this trick was the same as when I trained him to pick up his toys….getting him to hold on to it and walk with it when he was prepared to drop it to get a treat. But as I moved further and further away from him, he caught on that he had to carry it all the way to me before dropping it. See how far he’s come:

What do I love most about this video? Luke’s constantly wagging tail as he follows me around. Training for us is all about having fun and building his confidence.

I want to work with different objects for this trick, though obviously nothing breakable! I might try a water bottle before possibly trying a cup again (you could see in the video he still has trouble with the cup). We will also start working on more distance….I have already gotten him to follow me up the stairs with the small basket once! I’m also considering trying to put something inside the basket to have him carry it. We’ll keep you posted on what we try and how it works out!

*Affiliate link – if you order through this link, we might receive a small commission, but you will still pay the same price.