Somewhere around the end of May, I decided to step up the workout programs for the dogs and for myself.  Cricket had put on a little weight, and I thought maybe Sheba had also.  I started running, first with Cricket, then with Sheba.  Both of them loved it.  Kobi was starting to have issues with his back legs, so I adjusted his schedule too, to more frequent, but shorter walks.  Then the daily torrential downpours started.  After that ended we went into a spell of 90 degree weather with humidity.

I continually made adjustments to our routines to try to work around the crazy weather. We’d get out earlier in the morning if we could.   Then later in June our Golden Retriever Moses became sick and died shortly thereafter.  That really sent me into a funk, and I struggled to keep up the exercise program.  Basically, it was hit or miss for a while.  Eventually I have started to pull myself together, and the weather has evened out to normal Summer weather.  Various other interruptions to my normal routine keep arising…. there was a vacation in there (much needed), a broken tooth sending me to the dentist when I would normally be working out; social engagements, appointments, etc., etc. 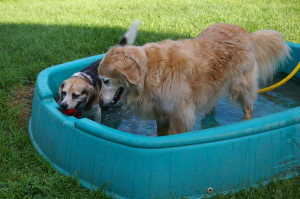 If I have to be honest, when things get disrupted I am easily distracted from working out, even though I know it should be a priority, for all of us.  The girls were still getting to play ball during the hot spell, when we could play in the morning, and they had their swimming pool to cool off.  They were at least getting some exercise, and Kobi was still getting some walks.  The point was that I wanted to add some variety to their exercise routines, and get them away from the house more.

I often would tell people that having four dogs was no more work than having 2 or 3.  I sometimes wondered if that was true, but I really didn’t look forward to the day we would find out, since that meant we would be losing one.  I never expected it to happen so soon (Moses was only 8), and I certainly didn’t expect the answer that I got to my question.  It’s not any easier having 3 than 4.  In fact, it has added a new problem.  It was my intention at some point to start running with both girls at the same time, because time is my biggest issue and I knew that if I could take both of them it would make things easier.  That was a great plan, until we lost Moses.  You see, Kobi has not been left home alone EVER since 9 years ago when we lost his sister Maggie.  It did not go well back then (we ended up having to leave him with a neighbor until we could get another dog – no doggie day care around here back then).  I refuse to even try it now; I don’t want to risk putting the poor old guy through that stress.  As well, neither of the girls has ever been left home alone either.  My hubby is usually working during the time that working out is most convenient for me, and it’s too hot in the later afternoon when he is home.

That’s OK, I’ll just adjust my plans again….back to running with the girls separately.  Then when I get back from my run, Kobi gets his walk.  Oh, I need to mention that the girls HOWL when I leave with Kobi!  I’m sure the neighbors are impressed. I think that rules out leaving either of them home alone either.  On top of that, just within the last week or so, Sheba started limping.  I don’t believe it has anything to do with the running, because when she started we hadn’t really been running that often.  It’s more likely she twisted something when playing ball, or that she’s starting with arthritis (she will be 9 in October).  It’s been non-specific, and very subtle.  We can’t really tell what’s hurting her, it’s such a slight limp, and it seems to bother the most after she’s been sleeping.  We are trying to keep her quieter in hopes it will resolve itself, but we knew in the backs of our minds that we may end up taking her to the vet.  (In fact just before posting this we have pinpointed it to her left front leg, and she seems worse today after resting all day yesterday and today.  She’ll be seeing the vet next week).  What bums me out the most is that Sheba loved the running.  So I decided to take her swimming, thinking that would be good low impact exercise for her and it is something she also loves. 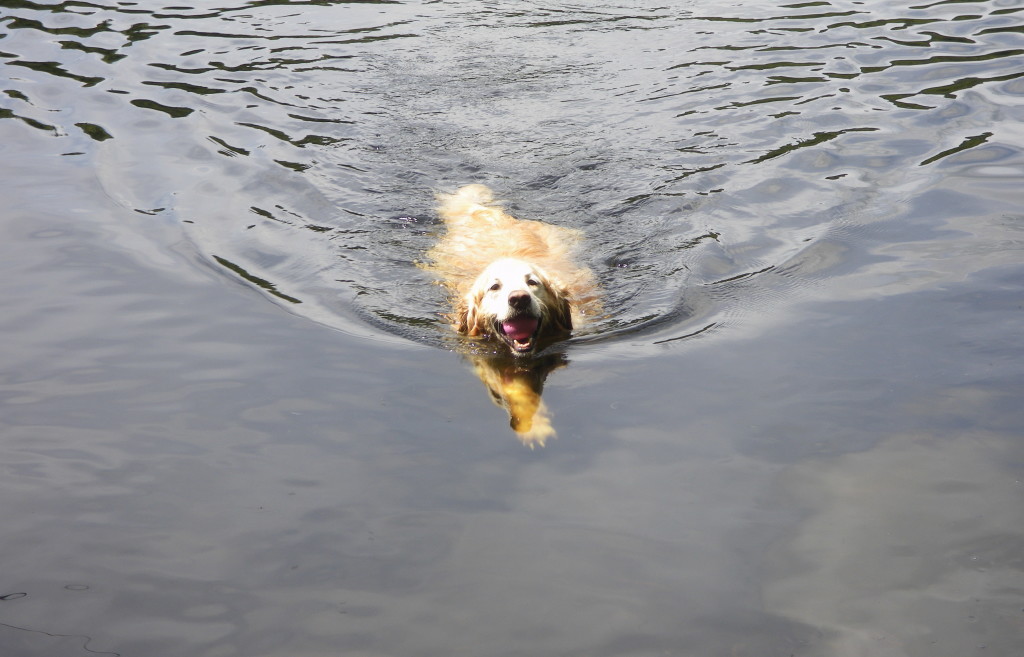 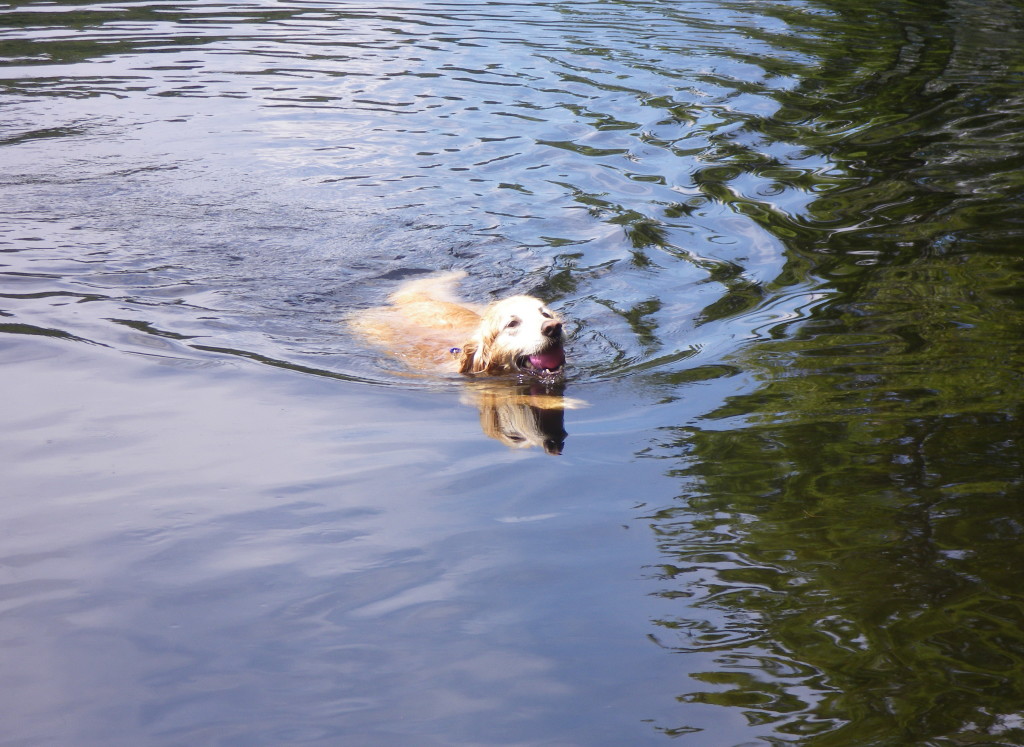 So here I go, adjusting my plans AGAIN.  Now I am taking Sheba for short walks and then a swim.    Cricket is back to running again, and still playing ball.  The challenge there is what to do with Sheba, because she wants to play ball too, even though she’s not as intense with it as Cricket (read my post Beagle Retriever). Kobi is getting his shorter walks, though still not as often as I’d like.  I think things are settling down a bit.  On top of everything else, my hubby was helping out by taking the dogs for runs or walks on weekend mornings, and then he hurt himself running!

I know how important exercise is to keeping our household fit and healthy.  We are all getting older, which makes it even more crucial to me.  I suppose eventually I will get this all figured out, and hopefully find a routine that works.  I am plugging along, and not giving up!  There are some new things I want to try with them, (there is a K9 Kamp Challenge to try something new this month), other exercises I’ve been reading about on other blogs.  We may be starting to get on track now.  This week, Sheba got a swim, Cricket got a run (we had a great run yesterday and did our first sprints!) plus some ball playing, and Kobi got two walks (so far).

I am sure others of you have multiple dogs with different exercise needs, and I would love to know how you deal with it.

I hope to be sharing more about each dog’s routines once we get settled in!

We are thankful to our blog hop hosts:  SlimDoggy, Peggy’s Pet Place, and To Dog With Love.  I for one will be reading other posts this week and may find some answers to some of my issues.  There are some great articles out there to help all of us as we try to stay fit and healthy!