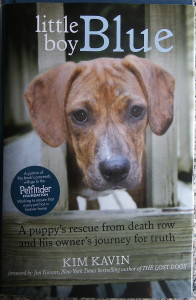 I immediately liked this book just when reading the forward by author Jim Gorant, who wrote The Lost Dogs: Michael Vick’s Dogs and Their Tale of Rescue and Redemption.  I have yet to read that book, but it is on my reading list.  There is a story itself just in the forward he wrote.

Kim Kavin is a lifelong dog lover, from a family of life long dog lovers.  Her family had purebred dogs but when she graduated from college, her first dog of her own was a beagle mix named Floyd.  When Floyd is 11 she adds another dog to her home, Stella, who she found through Petfinder.com.  When Floyd dies of old age she decides to add another rescue dog she also finds through Petfinder.  This time she goes through Lulu’s Rescue where there is a more stringent application process, and she ultimately drives to meet a transport at a shopping center, which is bringing her new dog up from North Carolina.

Thus begins her journey of not only getting to know her new puppy, Blue, but also her quest of trying to find out exactly the circumstances this puppy came from.  Blue is covered with healed over scabs that lead her to wonder what he has gone through before he came to her.  He is a loving puppy, but timid, and his fear of vehicles is perplexing even to trainers.

Kim’s quest leads her from Lulu’s Rescue to another rescue group, to Blue’s foster home, to a mobile spay/neuter clinic, and ultimately to the taxpayer-funded Person County Animal Control.  She decides she needs to research all these places more closely and travels to North Carolina.  What she finds along the way can be both shocking and dismaying.

The animal shelter Blue came from routinely euthanizes dogs deemed unadoptable by gas chamber.  I was familiar with the fact that these gas chambers existed:  I believe a lot of us heard the story of the beagle named Daniel who survived the gas chamber in Alabama and ultimately was saved and went on to be adopted.  This spurred Pennsylvania to become just the 20th state to outlaw those gas chambers.

Kim also visits Blue’s foster home and finds conditions that resemble a hoarding situation.  Her conscience eventually leads her to try and help the dogs there….but she learns that even though she reported this situation to the North Carolina chapter of the Humane Society of the United States, the dogs potentially rescued from that situation could end up right back at the very same shelter with the gas chamber.  She also learns that sometimes people rescuing dogs are often not true rescuers, they can be fronts for dog fighting rings.  She is reassured that this is not the case here, but while she fears the dogs will end up back at that shelter, they have mysteriously disappeared.  Someone had tipped off the foster home, and we will never know what happened to those dogs.

The author’s quest does not lead only to sad discoveries, however; her journey also leads her to a wonderful animal shelter in Massachusetts, Northeast Animal Shelter.  Here conditions are the opposite of what she saw in North Carolina.  This is a no kill shelter which has saved over 100,000 animals since 1976.  Also, after all she has seen, Kim decides to become a foster parent herself, and she goes on to foster many dogs who move on to happy homes.  She also works closely with Blue, taking him to obedience school, where he earns his AKC Canine Good Citizen certificate.  Blue grows into a wonderful dog, with much love to give.

I learned a lot from this book, some of it very surprising to me.  Since I live in the Northeast, I have been aware of many shelters transporting dogs from the South to this area to find them homes.  What I learned is that there is a lot more to this process than I realized, and a lot of people working hard along the way to save these dogs. It’s not just one rescue from New England pulling dogs from a Southern shelter; there has to be rescuers and sometimes foster care on the other end too, plus many volunteers to transport them, such as Pilots N Paws, a non-profit which is made up of volunteer pilots.  As well there are politics to deal with, which is never an easy thing.

Interspersed with all this information and the story of Kim’s quest for it is the wonderful story of Blue, and the other dogs in her life.  To me, that made the book enjoyable as well as informative, and in spite of the bad news along the way, it left me feeling hopeful.  I am hopeful that all the good people are trying to do will ultimately overcome the evil, the ignorance and the misinformation that leads to so many dogs dying in shelters.  I am glad I live in a place where our shelters are more and more becoming no-kill, and that my tax dollars don’t pay for euthanasia.  I imagine even people who live in these areas can be unaware of what is going on.  There is one story in the book of a family in Mississippi who brought their 6 month old puppy to a shelter because they felt they weren’t giving her the time she deserved.  They thought a new, better home would be found for her.  Overnight they changed their minds, and when they went back the next morning to bring her back home, she had already been euthanized!

I highly recommend this book.  There are a lot of lessons to be learned here, such as doing your research before adopting a pet from an unknown source or shelter.  Additionally the statistics the author shares remind us that spaying and neutering are of utmost importance.  It is very well written, thought provoking, and a must-read for all dog lovers out there.

I would love to know if you have read this book and what you learned from it.  If you have not read it and would like further information you can visit the related blog for Little Boy Blue.  Here you can find links to purchase the book, and you can also read the first two chapters of it for free.

Disclaimer:  I borrowed this book from a friend, so I was in no way compensated for this review.  All the opinions included are my own.