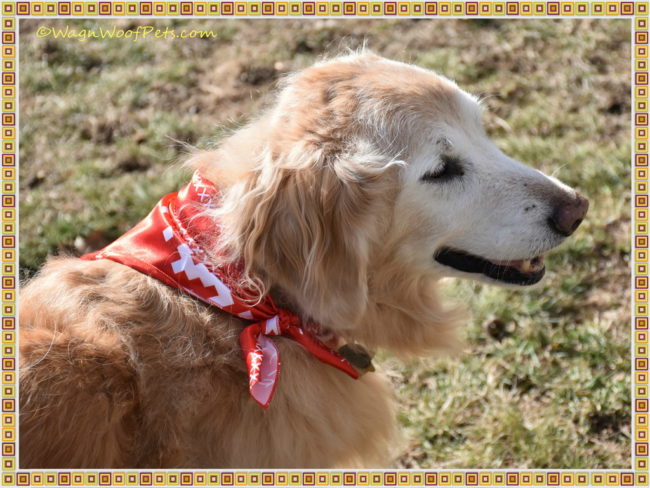 A golden light went out in our world Wednesday evening. Our precious Sheba lost her battle with cancer. How hard she fought….for almost two years! We knew the battle was getting tougher for her over the last weeks. Her appetite waned just a little more each day. By last week getting her to eat any meals at all was challenging. By about a week ago she would only eat a very small amount of supper; though we could still get her to take treats. Up until then she had still been playing in the yard, and still barking playfully at her siblings.

She was moving more slowly though, and getting up at times was difficult for her. She was losing her eyesight as well, but as long as she wanted to be out in the yard even attempting to play, we knew she was happy. When getting her to eat anything became an increasing struggle for us and an obvious chore for her, we knew the time was coming. She was spending more time sleeping and less time outside where she had always loved to be.

By Wednesday morning she would not eat at all, and when she went outside in the fresh snow, she just immediately laid down in it. Eventually she started shivering and when we got her inside we knew it was time to make that decision. It was easier than I thought it would be to do so. She was getting no more enjoyment out of life, was obviously uncomfortable, and she was not herself. We knew it was time to let her go; and to help her to get to the Rainbow Bridge where she could be whole again. I had promised her when she was no longer happy, we would do that for her. It’s not that she didn’t want to be happy, but we know she was simply tired.

As always, our vet’s office was there for us and were able to get her in that evening. We did not want to wait and just watch her continue to suffer. She was helped on her journey with the Dadz and I right there with her, and her favorite vet tech assisting. It was not really what I expected, as it was our first time having to make this decision for a dog. It was peaceful, quiet, and went quickly. We whispered our love to her and I told her to send our love to her brothers Kobi and Moses as well. Her struggle was finally over.

Knowing we made the decision we had to for her was little comfort when the end result was the same: she’s gone. We know that she stayed with us for as long as she could; and that turned out to be far longer than we expected. It was over a year ago when she had her second cancer surgery and it was found to be a very aggressive form of her cancer (spindle cell sarcoma). She gave us some scares along the way, but she also reached some milestones we never expected her to; the move to our new home and through the summer, her 12th birthday, the holidays, and into a new year.

Luke was a comfort to us, kissing away my tears, but Cricket…..poor Cricket. She spent the evening after we came home without her big sissie, not sleeping like she usually does at that time; but searching for her sister. She’d go outside and stare off the deck towards the driveway where we had left with Sheba, then when I’d get her into the house she would run to the entryway door where she had last seen her. Then she looked around her and down the hallway and ran to the bedroom to look for her there. She did that several times during the evening, and even twice after we went to bed. This from a dog who loves her sleep and rarely stirs after supper time.

Thank goodness by the next morning she stopped doing that; it was tearing at my heart (her late beagle brother Kobi did the exact same thing when we lost his sister Maggie). I’m sure, like us, she knew she had to accept that her sister was not coming back home. We’re spending time together as a family right now. Next week I plan to write a tribute to our sweet Sheba, and she will be making appearances in some posts I already had planned as well. She will be missed beyond words, but I know I will be able to find some to honor the life and love that she gave us so selflessly.