Even when it brings lots of noise and a variety of visitors.

Once we got through the scare with Sheba I was more able to focus on what I wanted to get done around the house before our company arrived on Friday and the party on Saturday.

The Dadz was busy outside working with the contractors and in between that helped me with painting prep and hanging pictures and curtains. The dogs had their play time every morning so they were mostly content to just hang out and keep an eye on both of us.

They did, however, get pretty riled up when the big trucks started arriving with materials for our garage and pole barn floors! I was outside trimming bushes while the dogs were inside chilling out, when the first big dump truck arrived. The dogs bark at any vehicle that pulls into our driveway, but the backup beeping on this one really set them off. Not only did they bark, but they were howling away! They don’t howl too often, and I think my hubby was mortified, but I thought it was pretty funny. They sounded like a pack of wild dogs!

Eventually I got them settled down and the next morning when the second dump truck arrived, they barely even barked! Luke was outside with me, just calmly watching. On Thursday though, when the cement truck arrived it was a different story. That truck made a lot of different noises and one of the first ones really freaked them out. I was outside with them, and I had a friend (stranger to Luke though) inside helping me with cleaning.

Poor Luke was shaking and wanting to get inside badly, and the girls were nervous too. I had to quickly hustle all of them into the master bedroom telling my friend that she’d have to get to that room later. I put them in there and closed all the windows and turned the fan on, and kept them there until the truck was gone. One good thing about Luke and his fears is that as soon as whatever is worrying him goes away, he settles right down (the same with the girls). The bad thing is that now any truck pulling into the driveway is making him nervous, so we’re going to have to work through that.

At least that was the last of the trucks for that week. The contractors had a couple jobs to work on inside as well, and Luke did well staying outside while they did. Sheba loves to just lie outside on the patio, but Cricket, our stubborn little beagle, will stand and scratch at the door endlessly until I let her in! She beelined for her bed each time though, so I didn’t have to worry about her getting in the way of the contractors working.

I took off to run errands and pick up my friend from the bus station on Friday, so I was gone for most of the day and the dogs got a good chance to just chill out for a while with the Dadz. Luke had to be kept mostly separate from my friend as she is still a stranger to him, but we worked on things a bit and I feel good about how he did. I’ll fill you in more on that next week for the Positive Pet Training hop.

I kept the dogs in the bedroom as people arrived for our party on Saturday. Even though the girls would be fine, they also would bark at everyone that came and I just find it easier to keep them away from the door. Then I also don’t have to worry about doors and gates in the yard opening and possible escapes. Later on the girls got to visit with our company, and play ball with their old friend Alex, my friend’s son who used to housesit with her for us. My sister, who Luke loves, and I gave him some attention at the same time. The BBQ went great, in spite of a crazy storm blowing through during it!

We had some other interesting company during the week one morning: 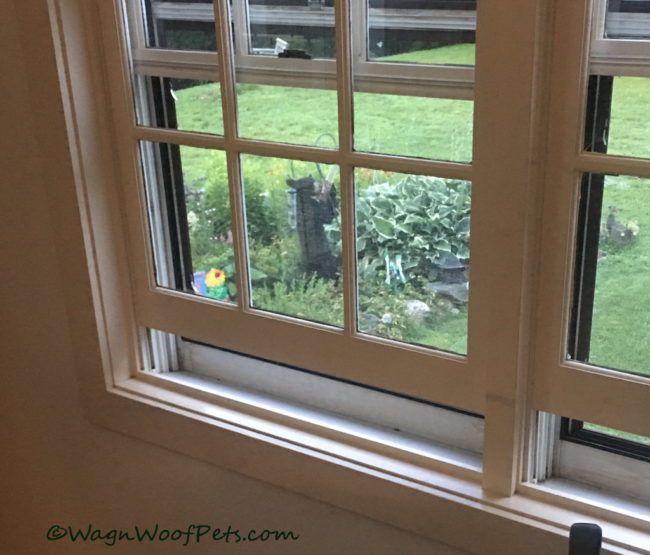 Sigh. I was hoping the bears would not return to raid my bird feeders; we’ve been enjoying the birds so much. This is a young one so at least he didn’t destroy my feeders! However, we can’t let him learn that homes are places to find food, that’s how bears get in trouble around here. Right now we’ve started taking the feeders in at night, and so far he seems to be staying away. We also let the dogs out to bark after he’s out of sight – they smell him – in the hopes that will deter him from returning as well; even though it is fun to see him (as long as we’re in the house). He is an early riser like my hubby though, so hubby is the only one who actually saw him (and he took the photo).

By the time Sunday morning rolled around and I had brought my friend back to the bus station, we were all pretty glad to have our peace and quiet back and we took advantage to just have some down time.

Even though there were things I didn’t get to do that week, like more swims and walks for the dogs, or training with Luke and Samantha so she can get back into the full household (we’re so close!), I still felt like we had a productive and good week. No matter what, I’m always happy to have that extra time to just be with my family, and that’s the true joy of a staycation.